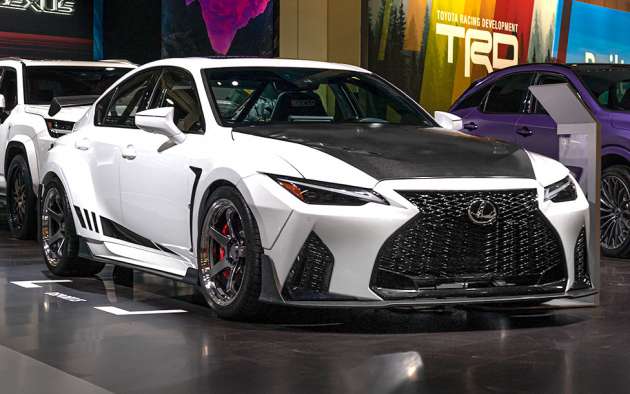 Lexus has revealed its line-up of cars for this year’s SEMA Show, which includes a modified IS that delivers over 600 hp, several concepts based on the brand’s SUVs as well as the Electrified Sport concept.

We start with the most exciting of the bunch, the DSPORT IS 600+ Project Build. Based on latest IS 350 F Sport that made its debut two years ago, Lexus engineers threw out the stock 2GR-FKS 3.5 litre naturally-aspirated V6 petrol engine and went over to Toyota to find a replacement.

What they ended up with is the V35A-FTS from the Dynamic Force engine family that is also used by the LS 500, which has the same displacement of 3.5 litres, but comes with a pair of billet compressor wheel turbochargers. The V35A-FTS, which comes with port and direct fuel injection (D-4ST), is shoehorned into the IS body along with liquid-to-air intercoolers to help lower intake charge temperature and improve power.

The improved power output substantially more than the stock engine (311 hp) at more than 600 hp, which was achieved by increasing the boost levels of the CT28 turbos and using E85 fuel. A Samsonas six-speed sequential transmission with paddle shifters also makes its way into the IS for increased driver engagement and works with an Emtron engine management system.

Moving on, Lexus is also presenting two takes on the LX 600, with the first being the Urban Concept that features a multi-piece body kit by Artisan Spirits that includes several carbon-fibre pieces. Beefy Brembo brakes are also part of the street-friendly build, along with 24-inch HRE 540 Series wheels and a custom titanium exhaust system.

On the other end of the spectrum is the LX 600 Alpine Lifestyle Concept that is aimed at those that are looking to tackle rough terrain. Fitted components include a Dissent Off-road body armour system, JAOS carbon-fibre overfenders, Rigid Industries lighting, 20-inch Vossen HF6-4 Hybrid Forged wheels, Bridgetone All-Terrain tyres, a full complement of YETI accessories and a TrekBoxx Expedition System that stores gear efficiently.

Another off-road-themed show car is the GX 460 Overland Concept, which was developed in partnership with Cruiser Outfitters. This comes with Old Man Emu suspension for increased ground clearance and CBI Offroad exterior protection parts to shield vital components on difficult terrain.

The Overland Concept also gets Rigid Industries lighting systems, 18-inch F Sport wheels with Toyo Open Country MT tyres and a Prinsu roof rack that offers the utility of mounting and storage of gear, in addition to supporting the Yakima roof top tent.

The second least modified car of Lexus’ SEMA line-up is a RX 500h F SPORT Performance AWD that sits on 22-inch Rays Engineering Homura wheels with Michelin Pilot Sport 4S tyres and bearing a Matte Violet Metallic wrap. It is joined by the Electrified Sport concept that is unchanged from when we first laid eyes on it last December.