Today’s Jaguar XF has been in production for five years now, and to keep it fresh for another few years the automaker has given the midsize aluminum cat a refresh having more to do with the interior than the exterior. In fact the exterior changes might not pop out right from the start. But they’re there.

Jaguar has tweaked the pattern of the LED headlights and taillights as well as the grille, giving the XF a different mesh pattern with prominent horizontal links. The result is a slightly more modern look, though you might have to know what the 2015-generation XF looked like to be able to tell this is the facelift. The horizontal links of the mesh do a lot of the work here in making the XF seem newer, while the headlight contours stay the same.

The changes inside are far more prominent with a wide, floating touchscreen now occupying the center of the dash, just below the AC vents. This is a big departure from what this-generation XF offered at launch, and it’s also a reflection of just how far car interiors have advanced in the past few years thanks to rapidly evolving infotainment tech. The 11.4-inch glass infotainment system, housed in a magnesium frame, features Jaguar’s Pivi Pro operating system, capable of receiving over-the-air updates. 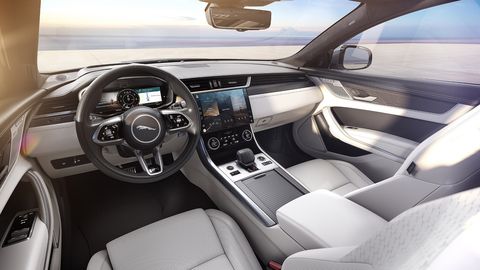 Interior changes that could be a little more difficult to notice, even if you’re familiar with the XF cabin, include a new interior lighting pattern. Active noise cancellation is now a standard item in the sedan in addition to proximity entry, a surround-view system, 12-speaker Meridian sound system and a wireless phone charger.

The changes to the engine roster are a bit less generous. Jaguar has taken away the optional V6, and is now only offering the XF with four-cylinder engines. That’s right: the V6 is leaving the lineup with this refresh, with Jaguar keeping a turbocharged 2.0-liter four-cylinder good for 246 hp and 269 lb-ft of torque, in addition to another version dialing up the output to 296 hp and 295 lb-ft. This is arguably enough for the sedan, perhaps reflecting today’s take rate for this powerplant, but we know we’ll miss the supercharged 3.0-liter V6 and its 380 hp and 332 lb-ft of torque, including in the Sportbrake (wagon) version. 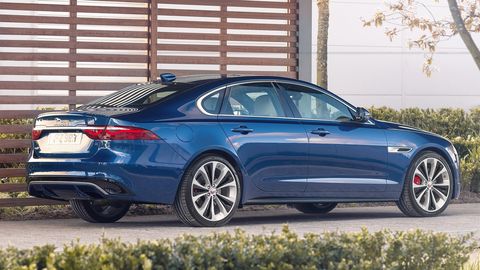 Speaking of the Sportbrake, if you were thinking about getting one, now is the time to rush out to your local Jaguar emporium for some deals. But not too quickly, because we have a feeling they still have plenty. As you’ve probably guessed by now the Sportbrake is leaving the U.S. market, a fact The Drive reported yesterday, following a similar fate of a great many other station wagons, especially European ones.

But a very pertinent question could be how many car shoppers knew Jaguar even offered a station wagon all this time? This is why we can’t have nice things for too long: Few people buy Jaguar wagons with supercharged 3.0-liter V6 engines good for 380 hp, and then they have to go away.

On a related note, if you’ve had your eye on an XE sedan you might also want to start making plans to buy one, because it also won’t be offered for the 2021 model year. The small XE sedan is leaving the U.S. entirely, after just one generation spanning five years. We hardly got to know it.