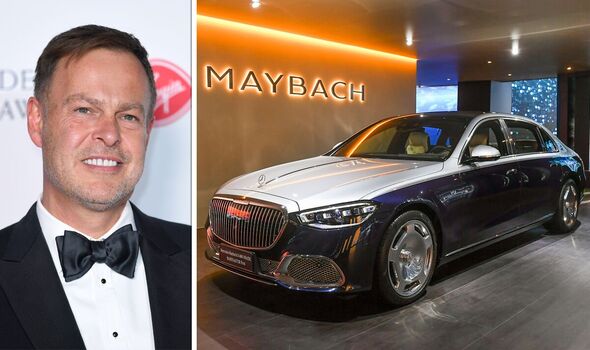 Peter Jones CBE is the last remaining original investor on the BBC series Dragons’ Den and the US adaptation American Inventor and has amassed a large fortune thanks to his business dealings. His business portfolio spans multiple sectors including Red Letter Days, Jessops and even Levi Roots’ Reggae Reggae Sauce, but cars have always been central to Mr Jones’ life.

The investor and entrepreneur is a keen car enthusiast, admitting that his first car was a bright orange Alfa Romeo Alfasud.

The car was kitted out with a state-of-the-art stereo with “massive speakers in the back”, when he was just 17, saying it had given him his freedom.

The tiny Alfa Romeo was an early indication of his future as a petrolhead, with the investor eventually owning Ferraris, Maybachs and Bentleys.

Looking back on the Alfa Romeo, he said: “That car was something special; it gave me something I’ll never forget, freedom.

“I was able to just drive and drive and I must have spent hundreds of pounds on petrol in those first few months, I think I probably even slept in it.”

Once he turned 19, he invested in an Audi 80 Sport, following the success of a lucrative tennis academy in Maidenhead.

Since his early beginnings in business, he has partnered with Alfa Romeo to support his charitable foundation and ignite entrepreneurship among Britain’s young people.

Damien Dally, Alfa Romeo head of brand, commented on the partnership, saying: “Naturally, we’re looking forward to the months ahead and supporting the work of the Peter Jones Foundation.

“And it’s always great to work with someone who understands the appeal of owning an Alfa.”

Both men took delivery of a Maybach 57 – one of the most coveted and desirable cars in the world.

Peter Jones – who is 6ft 7inches – said the premium Mercedes gives him good leg room, while Theo hailed the car as his “chill out zone”.

Halfords is offering an incredible deal where you can join the Premium Halfords Motoring Club and get FREE MOT from just £4.99 a month. With benefits worth over £100, don’t miss the chance to join now.

You can get also get a FREE membership when you join the Halfords Motoring Club, which includes a FREE 10 point car check, £10 off MOT and more.

Speaking in 2007, he praised his Amex Centurion Black card for letting him make larger purchases without restrictions.

The Dragon also admitted that losing his computer business at age 29 was the worst thing that ever happened to him.

He said: “I felt well-off with a detached house, a BMW, a Porsche, everything – it was a lot to lose all at once.

“I was living in Bray, near Maidenhead at the time. I ended up having to move back with my parents for a couple of weeks and then to an office for six months. I had no hot water, no car and no money. I was able to stay at the office because I was renting it from a bank and managed to persuade it to let me stay there.”

He eventually managed to secure a job with technology firm Siemens, who gave him a company car, which allowed him to kickstart his business career once again.

An older BBC documentary, “How we made our millions”, sees Peter Jones travelling up and down the country to discover how business people got to the position they are in today.

Throughout the series, he can be seen driving a flash black Ferrari and a Range Rover as he interviewed Richard Reed, founder of Innocent Drinks, and Michelle Mone.

Series 20 of Dragons’ Den airs tonight at 8pm on BBC One and on catchup on BBC iPlayer.

Best Renderings For The Week Of October 31