The Conference of Automotive Remarketing brought together three prestigious honors in one place this year that focused on leaders who drove the industry closer to advanced technology and sharper management.

In the first award, the National Auto Auction Association and the International Automotive Remarketers Alliance gave the Ed Bobit Industry Icon Award to Venkat Krishnamoorthy, the president and CEO of Auto IMS, a company that helps remarketing operations become more profitable through smarter use of data and more efficient management.

The Ed Bobit Industry Icon Award, which recognizes leaders who shaped the industry, is named after the late Ed Bobit, who founded Bobit Business Media in 1961 with the flagship Automotive Fleet title and over more than five decades built up the company into the largest fleet media publisher that includes more than 20 media brand titles and 25+ conferences, trade shows, and events.

The NAAA and IARA jointly created the award in 2015 to bestow on members of the automotive remarketing industry who most exemplify Bobit’s leadership, dedication, service, and devotion to excellence, IARA President Jeff Bescher told attendees March 23 during the conference.

Executive director Tony Long said the award is given to leaders who shaped the industry; Krishnamoorthy “advanced the remarketing industry by facilitating the exchange of data and more efficient management of wholesale remarketing inventory,” Long said. He started at Auto IMS in 2002 after working on the technology team for Delta Airlines and held various positions of increasing responsibility.

“Venkat has been an active member of our industry since starting with Auto IMS 20 years ago, a supporter of the IARA as a committee co-chair and board director, and a supporter of the NAAA, earing the respect of industry colleagues,” added NAAA CEO Tricia Heon. She cited his knowledge and “commitment to client service.”

Upon taking the stage to accept the award, Venkat said he is deeply humbled and honored for the recognition. “We put sweat equity into both organizations.”

He recalled how he did not know one industry person by name when he attended his first NAAA event in Orlando in 2006. “I took it one handshake at a time,” he said. “I am thankful to all the friends in this room who have taken the time to talk to me at every juncture at every conference. That has helped us shape AutoIMS on a daily basis, and I’m accepting this recognition on behalf of the employees. I would tell everyone who is new that this is a great industry that believes in competition as well as coopetition.” 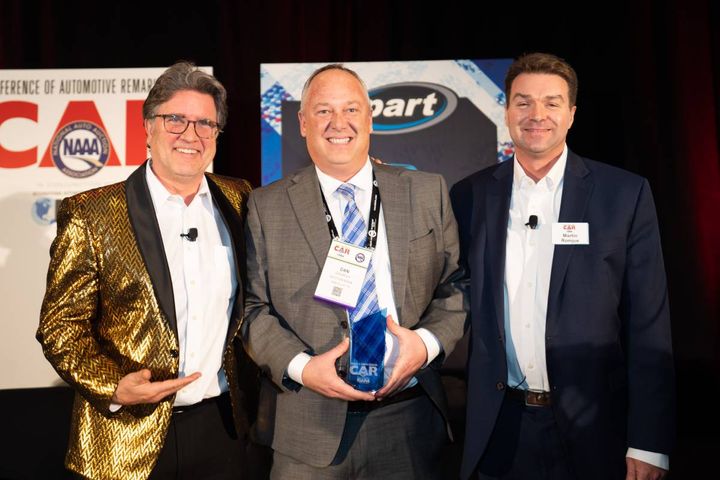 Remarketer of the Year

Dan Diedrich, the CEO of Auction Edge, received the 2022 Remarketer of the Year Award on March 24. The award recognizes individuals in the remarketing industry who share expertise and skills that advance the industry, participate in industry associations and groups, and work with colleagues and industry members in developing the next generation of remarketers.

As CEO of Auction Edge, Diedrich works with a team of more than 110 individuals building, developing, and supporting remarketing technologies used by over 210 Auto Auctions in the U.S. and Canada. Diedrich joined Auction Edge in 2012 after working on the technical side of auctions since 1998 and holding several sales and management roles.

As technology moved to a more central role in remarketing, Dan’s ability to understand and drive change was evident in the growth of Auction Edge as the dominant independent provider of solutions and guidance for Auctions, buyers and sellers in the U.S. and Canada. Promoted to CEO in 2016, Dan continues to advocate for his customers and theirs, with Auction Edge enabling the 2020 conversion to all digital sales through the COVID pandemic.

“I stand on the shoulders of giants, and this award should really go to the teams that work with me, and the people who helped me along the way,” Diedrich said upon accepting the award. “I come from an entrepreneurial family, and the hundreds of auctions, and the tens of thousands of buyers and consignors are the ones that really make this award possible.” 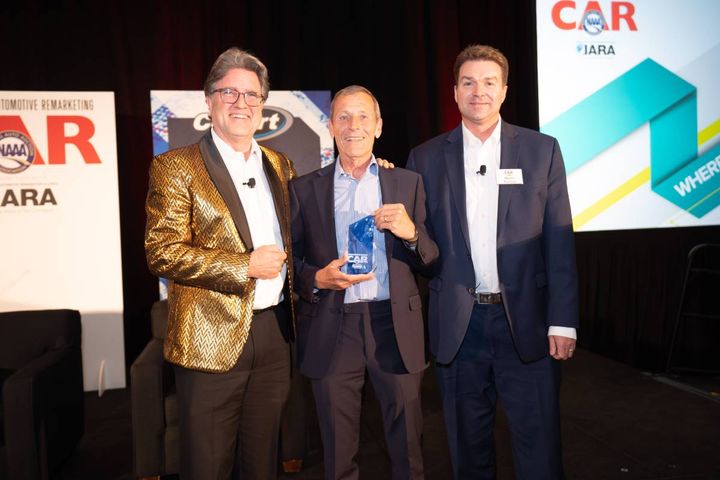 Consignor of the Year

Following the Remarketer of the Year, CAR honored the recipient of the 2022 Consignor of the Year Award, John. H. Manchin, national fleet remarketing manager for Subaru of America, Inc., who has worked in the used car and remarketing industries for a total of 47 years.

Manchin is responsible for the asset liquidation and remarketing activities for all Subaru vehicle groups in the secondary market. He began his career at Subaru in December 2001 as remarketing manager for Subaru Auto Leasing with the responsibility of liquidating the consumer off-lease portfolio. He introduced and incorporated multi-channel, upstream remarketing at Subaru in March 2003 by designing and implementing SubaruSOLD, an internet-based remarketing system.

Before Subaru, he worked more than two decades in the used car sector, with 12 years in retail and another 12 in banking and auto finance. His first job was at a Pontiac-Datsun dealership. He holds an MBA degree (marketing/finance concentration) from Widener University.

“I still feel to this day that the remarketing segment of the auto industry is unique, totally different than everything else,” Manchin said in his award remarks. “What’s nice is everybody knows everybody and gets along with everyone. As an industry we get together and share best practices. We are not competitors.

“I’ve been very fortunate that the product I represent is a very good high-quality product, and that helps my remarketing efforts,” he said. “I’m very thankful that my career at the manufacturing level has been with a company such as Subaru. The car and the organization are high quality.”

Manchin plans to retire in January 2023 after almost 22 years at Subaru. In a follow up interview, Manchin credited Subaru for his good career and cited the many business relationships that turned into long-term friendships.

“At end of day, I was one of these people that were blessed to be happy with their career. Work never seemed like work. I just thoroughly enjoyed my job. In all my years of remarketing, I met a lot of people. What was special was the relationships started out as colleagues, or vendors, or business partners, and they quickly turned into really good friendships in the industry.”

‘A war on cars!’ Drivers rage at 20mph speed cameras launching across the UK