Subaru is getting ready to take the wraps off its first mass-market EV next week, when the Solterra debuts at the LA auto show. The battery-electric EV will share a platform with the Toyota bZ4X, which was revealed in near-production form just last week, but Subaru is expected to put its own spin on the model, not only to differentiate it from the Toyota version on the outside, but to offer its own audience something they will appreciate from a Subaru owner’s perspective.

What can we expect from Subaru’s electric SUV?

When it comes to the powertrain, the Solterra is likely to keep the 71.4-kWh battery of its Toyota twin, which will offer about 310 miles of the range in the slightly optimistic WLTP cycle. The Subaru model could also be offered solely in all-wheel-drive flavor with about 215 hp and 248 lb-ft of torque on tap, skipping the single-motor version. This means Subaru will likely position the Solterra a bit higher price-wise, while also seeking to offer its buyers the extra power from the all-wheel-drive version, since the single-motor bZ4X will only serve up 201 hp and 195 lb-ft of torque— fairly tame figures for what won’t be a light vehicle.

The dual-motor Solterra should stick close to its twin’s 7.7-second sprints from 0 to 62 mph. DC fast-charging speeds of up to 150 kW should allow the Solterra to juice up to 80% in 30 minutes, which will be fairly quick for a battery of its size. When it comes to range, the model should land around the 250-mile mark in the EPA cycle. 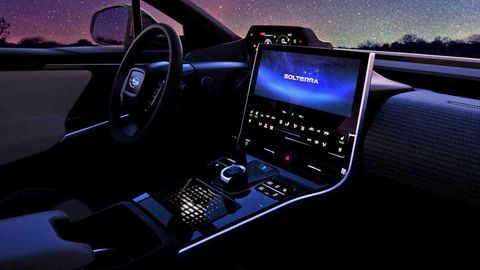 “The e-Subaru Global platform, which has been jointly-developed by Subaru and Toyota, enables to roll out various types of EVs efficiently by combining multiple modules and components, such as the front, center and rear of a vehicle,” Subaru said earlier this year. “While the two companies have brought together their knowledge to create a completely new platform, Subaru have aimed to realize superior passive safety and vehicle stability, which Subaru has always been pursuing, also in this BEV dedicated platform.”

If there is something the Subaru model will definitely have in common with the bZ4X, it’s the rakish profile, with Subaru opting to follow the Toyota model in adopting a less-than-maximized cargo compartment. So it’s not expected to offer cargo room comparable to the Ascent or the Forester, which both have fairly long-roof profiles. In that sense, the Solterra won’t fully overlap with any existing gas-engined Subaru offerings. The Solterra will likely offer more generous rear-seat accommodations in addition to a more luxurious cabin, whose interior we’ve already glimpsed ahead of the model’s reveal. 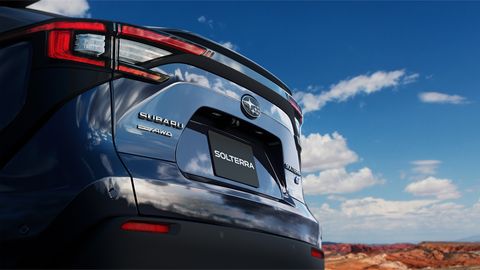 The only major exterior aspect that Subaru hasn’t shown in detail to date is the grille. This is perhaps where Subaru will stake out its own design themes for upcoming electric vehicles, and the few partial glimpses suggest it will stick with a boxy, trapezoidal front frame. There is still expected to be a modest functional intake for cooling purposes, so Subaru won’t be skipping on a front grille entirely.

One thing we don’t expect to see in the Subaru version is the option of a yoke-style steering, or a steer-by-wire system that Toyota will offer solely in China in its version of the EV. That experiment should stay confined to Toyota’s version.

The Solterra will be revealed online later tonight, ahead of its appearance at the LA auto show next week. The SUV will go on sale stateside as a 2023 model next year.

Lamborghini Is Bringing the Countach Supercar Back