The GT Sport Time Trials have refreshed for another week, but there’s a little change to procedings. Where usually you’d have two events to occupy you over the next 14 days, there’s now only one.

Fortunately the one time trial that remains is a pretty good one, as you’ll be heading to one of the most highly requested circuits in the game and doing it justice with high-speed machinery. It’s a Gr.1 event, set at Belgium’s Circuit de Spa-Francorchamps.

If you’re not familiar with GT Sport‘s car classes, Gr.1 is essentially the top specification of prototype racing across the last 30-or-so years. Anything that’s hit the track gunning for the overall victory at the 24 Hours of Le Mans slots right into this class, and it’s a heady old mix. You’ll find very recent LMP1-H cars like the Porsche 919 Hybrid and Toyota TS050, but also some older machinery like the Mazda 787B and Sauber C9. There’s even some fictional cars in there, largely those from the Vision Gran Turismo program which fit into the general ethos of this class, such as the Hyundai 2025 VGT.

That leads to some interesting match-ups, as the older Group C vehicles are devastating in a straight line, but the modern brakes and aero of the LMP1-H cars sees them unmatched in the bends. Add in hybrid power for drive out of the corners and you’ve got plenty of choice — though if you want to challenge the leaderboard you’ll almost certainly need to pick the 2016 Audi R18.

There’s not a lot of other factors to worry about this time round. This is a fixed-settings event, so aside from adjusting the driver aids you won’t have many sliders to play with. All cars are on Racing Medium tires for the event, and the class Balance of Performance is switched on, so just pick your car and pound out some laps.

GT Sport‘s Time Trial mode is a global competition, ranking your best time against all players worldwide, rather than just those in your region as with other Sport Mode events. This time trial will run through to February 25, when further events will replace it. 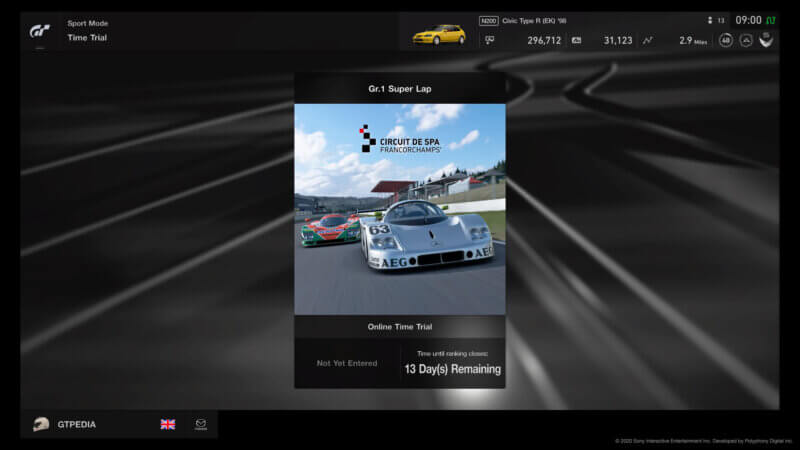