The summer sun has made its grand return to Forza Horizon 4 to begin a fresh week, and a fresh new season. Series 24 officially kicks off this week and, on schedule, brings new content and a new feature to the festival.

There’s also a new update to the Playlist itself, with a refreshed quartet of prizes for 50% and 80% completion. This week, a new Danish hypercar makes a noisy debut. 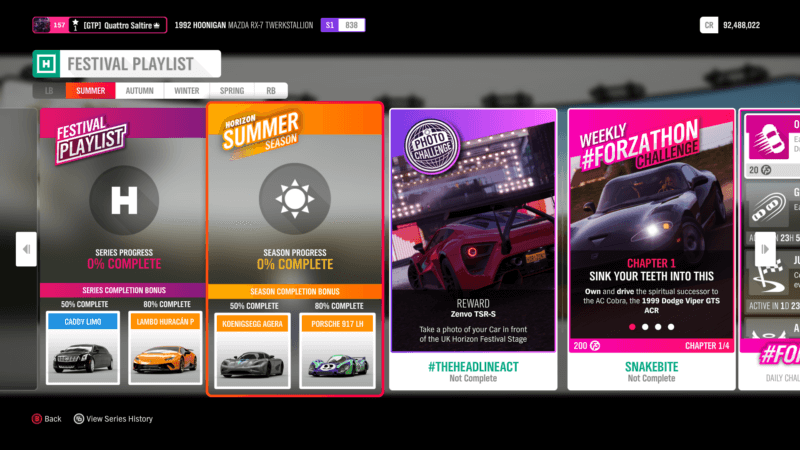 Extreme machines lead the way as part of the Season playlist rewards. Kicking things off is the 2011 Koenigsegg Agera.

Replacing the mad CCX is a tough task, but the Agera builds on the psychotic personality of its predecessor. Under the hood lies a 5.0-liter, twin-turbocharged V8 that develops over 900hp. Despite the addition of a rear spoiler from the CCX, the Agera will top out close to 250mph.

Joining the Agera is the Porsche 917 LH. Porsche’s legendary Le Mans winner remains one of the most iconic racing cars of all time. Powering this long tail variant is a 4.9-liter flat-12 making 600hp. The long tail aerodynamics mean this slippery 917 will get close to 240mph on a long enough straight.

The main course this week comes not from the seasonal championships, but from the new Photo Challenge. Your objective this week, #TheHeadlineAct, requires you to take a picture of any car in your collection in front of the Horizon Festival stage. Upon completion, you’ll receive the 2019 Zenvo TSR-S.

Succeeding the brand’s ST1, the TSR-S is the wildest car to come out of Denmark. With a new twin-supercharged, 5.8-liter V8, the TSR-S puts down 1200hp. The party piece however, comes from the peculiar centripetal rear wing. The wing acts as an aerodynamic anti-roll bar and will tilt to provide downforce to the side of the car needing the most grip.

Summer also has a returning Showcase Remix event. “Motocross Purposes” will have you racing through the forests in an Ariel Nomad against a team of dirt bikes.

For this month, the new Rivals event will let you test drive the 1977 Ford Escort Mk2 rally car on Ambleside Scramble before it becomes available in Winter.

This week’s events and prizes are below.

Summer In The City 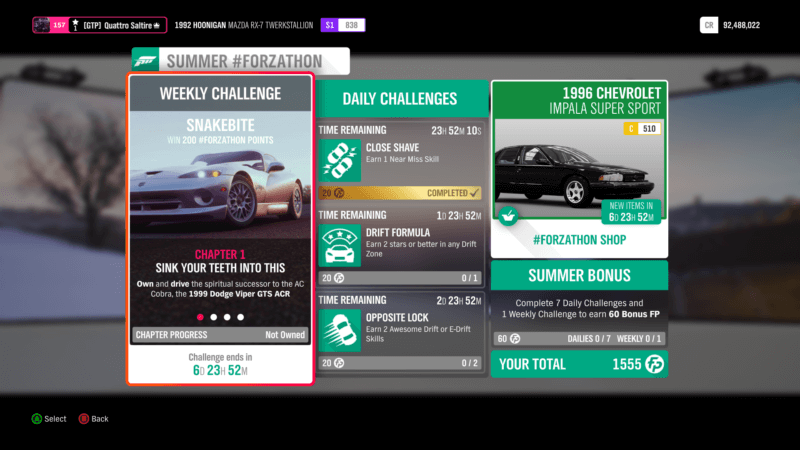 Forzathon this week looks to the Stars and Stripes, with the 1999 Dodge Viper GTS ACR. Jump into this V10 beast to get rolling.

Next, unleash that monster of an engine by earning 10 Ultimate Speed Skills. For the third objective, it’s off to the races as you’ll need to take victories in 4 Road Racing Series circuit events.

Finally, finish off this week by earning a total of 9 stars from Drift Zones. 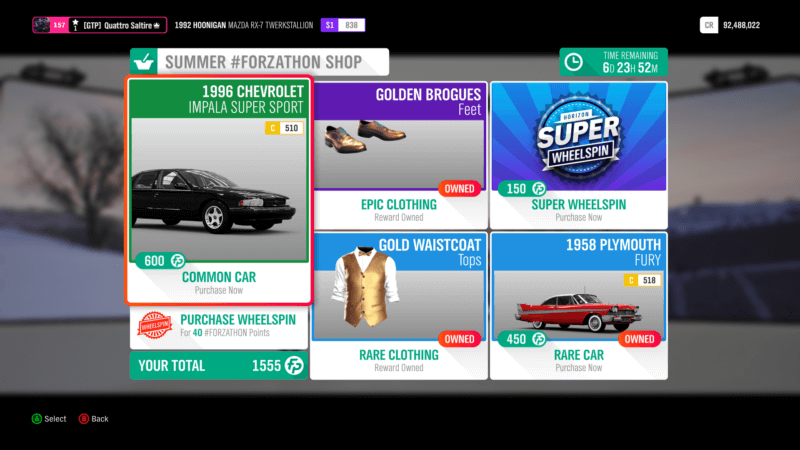 America takes over the Forzathon shop this week, with a pair of iconic names. First up is the 1996 Chevrolet Impala Super Sport.

Like the Ford Crown Victoria, the Impala made its greatest impression as a police car. Even without the ties to law enforcement, the Impala is also a capable performance sedan in its own right. The 5.7-liter V8 pushes 260hp, but with a few tweaks it can be turned into a beast.

You’ll need 600 Forzathon Points for the Impala. If you’re after an iconic police cruiser but find the Crown Vic too mainstream, then the Impala will be a good deal.

Joining the Impala is the 1958 Plymouth Fury. Made famous by the movie Christine, this imposing machine is sure to turn heads. With a 5.7-liter V8 and 305hp on tap, the Fury is all about cruising.

You’ll need to pony up 450FP for the Fury. If you want to potentially frighten other players in the middle of the night, then the Fury will do the job.

Cosmetic items available this week include the Golden Brogues and the Gold Waistcoat.