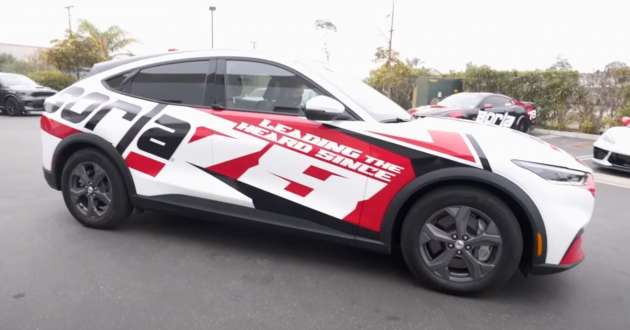 The Ford Mustang Mach-E is significant for the Blue Oval, not least because it has added a fully electric vehicle to the brand’s model range, but also by placing the Mustang nameplate not just to an EV, but one that is a crossover.

The aftermarket is where enthusiasts can right what they think has gone wrong, and though not much can be done about form and powertrain that the Mustang Mach-E has taken on, what can be played with is its sound; enter Borla, American exhaust specialists.

Borla showcased one lightly modified Mach-E at the 2022 SEMA show organised by the Specialty Equipment Market Association, where the fully electric crossover was outfitted with equipment to make it sound very much unlike a typical EV, Car & Driver reported.

Customers have already approached Borla to get a more aggressive sound for the Mach-E, and among them is American performance car brand Shelby. “Shelby said, ‘help us out, we need to add some sound to these.’ When you lose sound, you lose vibrations; it’s a different experience,” said Borla VP of sales and marketing David Borla.

The equipment involved in giving the Mustang Mach-E some augmented sound consists of a speaker set, a wiring harness, a digital processor which connects to the vehicle’s CANBUS port to sync the accelerator pedal to the sounds generated, as well as a mobile app that controls and changes the audio from the system. Installation takes about one hour, Car & Driver wrote.

At present, pre-programmed available sounds from the Borla system include those of a Ford Mustang Shelby GT500, a Chevrolet Camaro, and a C8 Corvette, the publication reported, though there’s more to come from Borla. “We’re working with a synthesiser company right now to come up with notes that have nothing to do with internal combustion,” Borla told the magazine.

Borla is fully aware that the idea of a sound-generating system for EVs will be polarising, however the firm’s mission remains as before, which is to make cars sound good, he said. “If you don’t like it, you can always turn it off,” he added. Certainly, not an option for ICE vehicles going anywhere under their own power. What do you think?