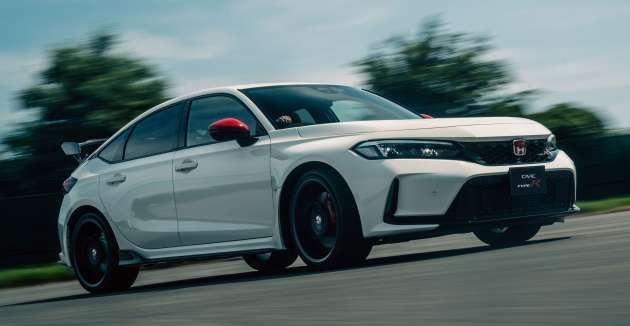 What do you think of the all-new 2023 Honda Civic Type R? Many will like the FL5’s more subtle looks compared to the wild FK8, but some might lament the softer appearance of the new hot hatch, preferring the all-action looks of the outgoing CTR. If you’re in the latter camp, sorry, the official accessories from Honda Access won’t help.

That’s because the genuine Honda accessories don’t do much for the exterior, with only the red wing mirror caps being obvious. Look closely though and you’ll see that the big rear wing is different. The main piece is curved upwards and the side tips are raised for more of a separate-piece look.

Unlike the stock wing, this piece is made from carbon fibre and that shaves 1 kg. There’s some red in the CF weave (finished with a clear coat) and if you look at the underside, there’s a pattern that Honda says improves aerodynamics and rear downforce. Honda Access learned this from the development of the Modulo X series for JDM models. That’s it for the exterior – wing and red mirrors.

Inside, the same carbon pattern is used on the centre console (replaces the stock silver trim) and door cards. The shift knob is in black alumite, wrapped with red leather, if you don’t like the full metal knob traditionally used by Type R cars. Black alumite is also found on the side step garnish with illuminated Type R logo. Speaking of lights, there’s also a welcome door projector light with the Type R logo.

The Type R seats are already in full red, but if you want more red still, you can opt for the red carpets that come in anti-odour and anti-bacterial material. There’s a heel pad for the driver and some black alumite too, although it’s not clear how the latter will be integrated. Plenty of red or white LEDs to put around the cabin, too.

Non-sporty items include a Qi wireless charger, luggage tray and paint protection film. The red weave carbon and black shift knob with red leather are similar to what Honda Access offered for the FK8 Civic Type R. No special wheels this time around, though.

Think of these items as Modulo accessories, but for the CTR (Modulo is a Honda Access brand) – what do you think? More on the new Civic Type R here.