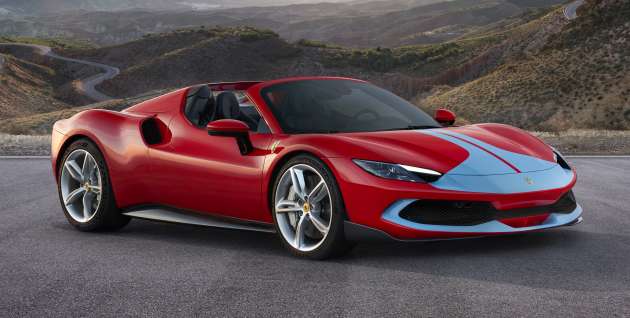 Ferrari has taken the wraps off its 296 GTS, the open top derivative of the 296 GTB plug-in hybrid. The mid-rear-engined two-seater berlinetta spider follows much of that seen mechanically on the hard top variant, but offers a different visual perspective, courtesy of its retractable hard top.

The lightweight folding roof, which offers the car a silhouette very similar to that of the 296 GTB when it’s up, takes 14 seconds to retract or deploy and can be operated at speeds of up to 45 km/h. It’s split into two sections that fold flush over the front half of the engine bay.

To accomodate the RHT, design changes include a new tonneau cover design, which creates a virtual fairing that mimics the aerodynamic behaviour of the coupe. Elsewhere, styling revisions include redesigned buttresses and the incorporation of a signature ‘aero bridge’ as well as the introduction of a window in the rear section of the engine cover in place of the composite unit on the GTB. 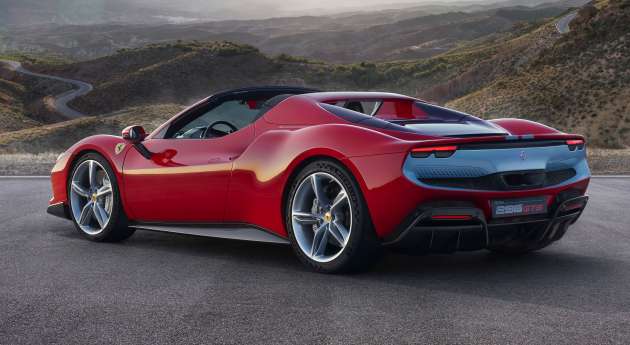 The 296 GTB’s chassis was also reoptimised for GTS, with modifications to the A-pillar, B-pillar and sills heping to improve torsional rigidity and bending stiffness, in this case by 50% and 8% respectively compared to previous spider applications.

As with the GTB, the lithium-ion battery on the car is an 80-cell 7.45 kWh unit, which has four less cells than the 7.9 kWh battery in the SF90. In terms of charging time, the unit charges around 5% faster than the Stradale’s unit, which takes about three hours to fill). All-electric range is 25 km, and the car can operate at up to 135 km/h in pure electric drive.

Like on the GTB, four drive modes are available on the GTS variant, selectable via the eManettino controller. These are all-electric eDrive; Hybrid, the default setting when the car is turned on; Performance, which keeps the engine running and prioritises charging the battery than on efficiency, and Qualify, which provides maximum power output from the electric motor, prioritising performance over battery charging.

Likewise, the dynamics control systems on offer – there’s eSSC (electronic Side Slip Control), electric traction control (eTC) and eDiff to be found, along with a six-way Chassis Dynamic Sensor (6w-CDS), which the automaker says enhances the car’s fun-to-drive factor and improves the vehicle’s response to both steering and throttle input. 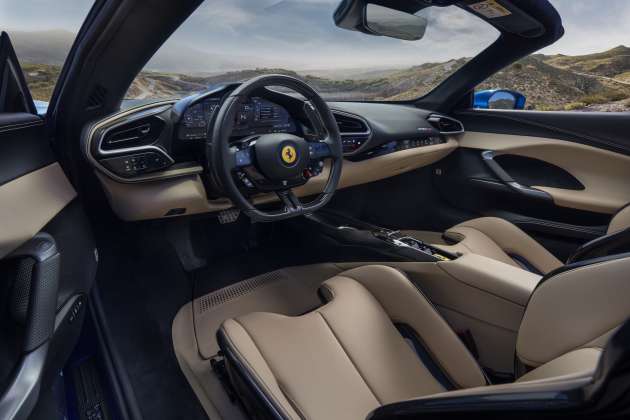 The GTS’ cockpit is largely similar to the GTB’s, although there are some minor changes, these being to the centre console and seats. The tunnel on the GTS has been redesigned slighlty – rather than being open as on the 296 GTB, it has a closing oddments compartment, which further emphasises the continuity between mats and tunnel.

Also to be found are specific diapason-style seats, created using contrasting grooves which coordinate aesthetically with the edge strip of the instrument cluster. The geometry of the trim behind the headrests was also reconfigured to channel as much of the air as possible towards the tonneau cover to reduce the amount of flow recirculating inside the cabin with the top down.

Similar to the 296 GTB, the GTS is also available with the Assetto Fiorano package (as seen here on the red car in the photos), which includes lightweight features and aero modifications.

2022 Proton Saga MC2 – why yet another facelift, why not an all-new model? Here is Proton's answer – paultan.org