It’s hard to believe that, as recently as five years ago, EVs were considered a niche technology. Stereotypes pegged owners as either high-tech Tesla fans or tree-hugging environmentalists, both of which had to accept trade-offs in terms of either cost or range to buy with their conscience. At that point, the adoption timeline was murky, at best.

Fast forward to 2022, and the EV landscape has changed wildly.

The market for new and used electric vehicles is limited by supply, not demand, and even cars that are no longer eligible for the $7,500 federal tax credit are sold out and marked up. Used EVs are continuing to appreciate in value month over month, and there are years-long waitlists for electric trucks.

Now that a new round of EV tax credits in the U.S. has been signed into law, what will the next five years look like?

Boston Consulting Group (BCG) is a global consulting firm with a robust automotive practice. Almost every year since 2018, BCG has released a thoroughly-designed market projection for EV adoption. In the few years since the first projection was released, the numbers have continually been revised to increase the rate of adoption.

Recurrent published this chart on U.S.-specific market projections in BCG’s global EV projections. It shows that over the course of four years – from 2018 to 2022 – U.S. EV sales projections for 2030 more than doubled, growing from an estimated 21% to 53%. 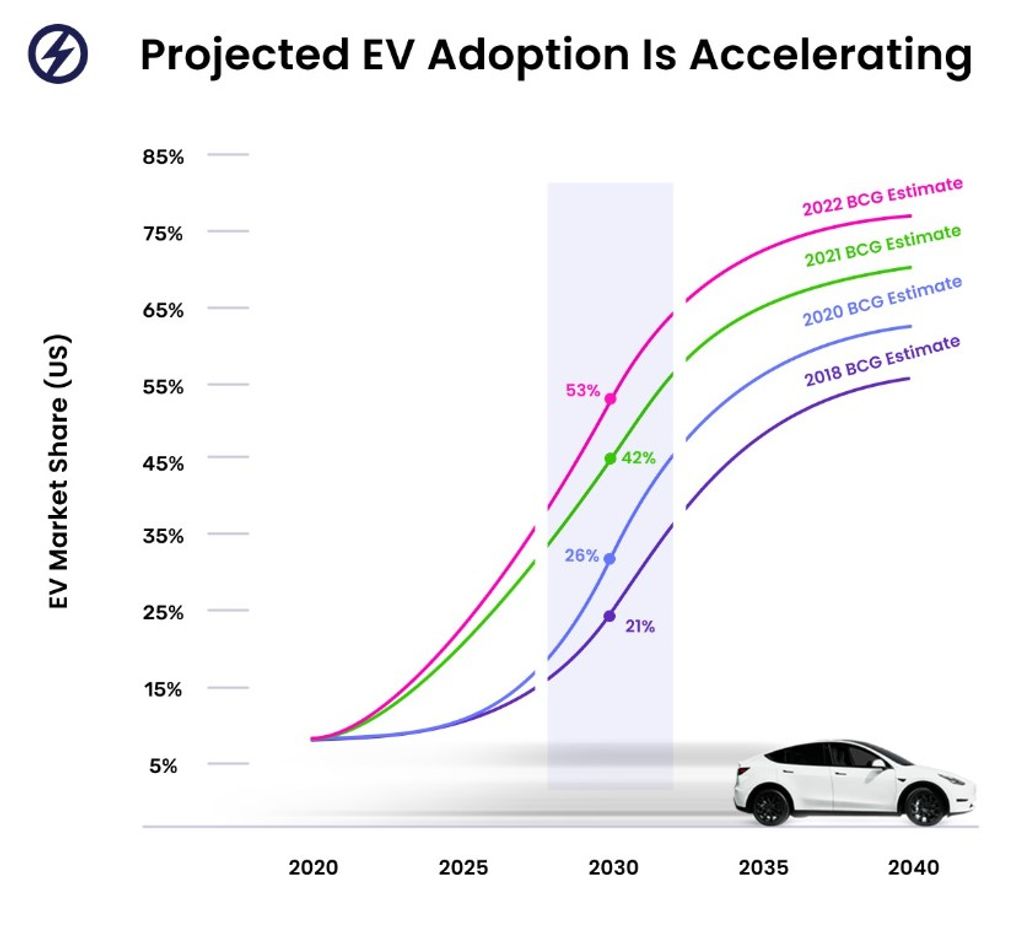 Feel free to take a moment to let that sink in. It’s a staggering acceleration timeline from one of the world’s top analysts. Perhaps even more exciting, the latest report was released in June, ahead of the Inflation Reduction Act and recent state commitments to emission-free vehicles.

How might the updated EV tax credits affect adoption by 2030?

With the passage of the Inflation Reduction Act, not only can we anticipate a rise in new EV purchases as sales caps are lifted for Tesla and GM, but there will be growing interest in the used EV market. Although only 17% of used EVs are listed at prices that make them eligible for the tax credit, taking $4,000 off a $20,000 car is a 25% discount, and may suddenly make EV ownership seem more achievable. The new regulation may also exert downward pressure on used EV prices that hover around the $25,000 mark and new EVs around $55,000.

There is an auto industry concern that, in the short term, the Inflation Reduction Act might harm EV sales by slashing eligibility. As of its signing on August 16, 70% of formerly eligible EV models became ineligible because they are not assembled in the U.S. Legacy automakers worry about more models losing eligibility with the still-in-progress “critical minerals and battery sourcing” requirements that go into effect on January 1, 2023.

Of course, the ultimate goal of all these requirements is to onshore the production and manufacturing of EVs and their parts. Automakers who have already pivoted to North American operations – such as Volkswagen, Tesla, Ford and GM – will be rewarded. And it will take a lot of momentum to slow down interest in EVs: Tesla has been ineligible for the federal tax credit since 2019, but their Model Y is rapidly becoming the world’s best-selling car.

Another very recent change that might drastically alter the near-term adoption rate is California’s plan to ban the sale of gas vehicles by 2035. California has the most cars of any state – about 10% of them – so this would be a huge driver of nationwide adoption. Plus, as goes California, so goes the 14 other states that follow the emissions guidance of the California Air Resources Board (CARB). The potential is for one-third of the nation’s vehicles to be emissions-free by 2035.

What do you think BCG’s 2030 projections will look like when they are updated? I’ll give you one guess.