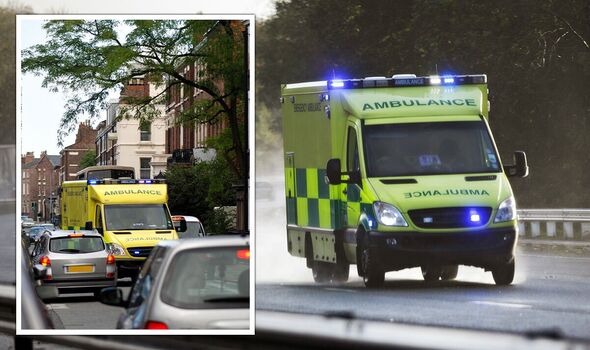 A pensioner has told of how he was fined £100 and given three points after pulling over on a busy road to allow an ambulance to overtake him. Frank Wallington, 76, had pulled over on his way to a funeral to allow the emergency services vehicle to overtake.

But the pensioner passed through traffic lights at a busy junction just 1.2 seconds after they turned red.

He was contacted a month later by Nottinghamshire Police, who informed him of his traffic offence and punishment.

Frank said the measures were unfair and told NottinghamshireLive he wanted mitigating circumstances to be considered.

He described the incident on the A52 Grantham Road in Nottinghamshire as “frustrating”.

He said: “I’m an advanced driver and I’ve always had a completely clean licence.

“I actually feel I could have carried on and driven straight through the traffic lights without any problem.

“But then I would have delayed the ambulance and what I assume was a car with perhaps a relative of the patient in the ambulance, with it being so close to the ambulance.

“I can’t deny that I was 1.2 seconds late going through the traffic lights. But my point is that it was mitigating circumstances.

“If I had carried on I would have blocked the ambulance’s procedure through those traffic lights as the road went into a single lane shortly afterwards.”

The Black Country man said he had made a “split-second decision” and paid the price.

He said he was “distracted” as he tried to let the ambulance through and wasn’t looking at the lights.

“A split second decision on my part has caused me to go through the lights after they had turned red, but I was distracted of course as they were overtaking me,” he said.

Despite explaining the situation, Frank claimed he had been told that he must appear at Nottingham Magistrate’s Court on February 14 if he wishes to dispute the punishment.

He added: “They are not listening. It’s going to be expensive to drive over there in fuel alone, to have a day in court just to say exactly what I would say in a letter and what I have already said to them.”

While the Highway Code clearly states that road users must give way to an oncoming emergency vehicle, it also adds that some manoeuvres are illegal.

British motorists were previously warned they could face fines up to £1,000 for letting an ambulance go past incorrectly.

The illegal manoeuvres include driving onto a bus lane, running a red light, and entering a yellow box junction.

While it’s easy for road users to assume that they would be exempt from following those rules when an ambulance approaches, that is not the case.

Some offences may not only land drivers with a hefty fine but also with several points on their driving licence.

“When one approaches do not panic. Consider the route of such a vehicle and take appropriate action to let it pass, while complying with all traffic signs.

“If necessary, pull to the side of the road and stop, but try to avoid stopping before the brow of a hill, a bend or narrow section of road.

“Do not endanger yourself, other road users, or pedestrians, and avoid mounting the kerb.

“Do not brake harshly on approach to a junction or roundabout, as a following vehicle may not have the same view as you.”