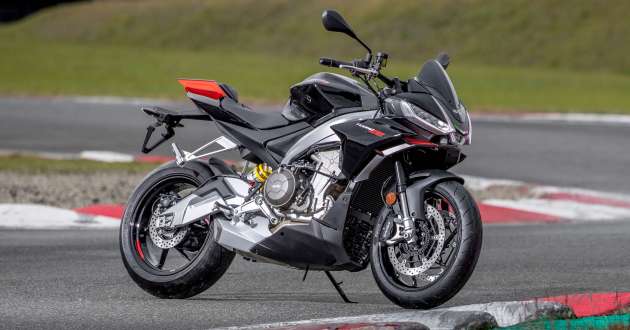 Just a little under a year after the premiere of the Aprilia Tuono 660 middleweight roadster comes this; the Tuono 660 Factory. As with its litre-plus category seniors the RSV4 and Tuono V4, the “Factory” suffix denotes a higher level of specification aimed at even sportier riding.

In the case of the Tuono 660 Factory, the up-specced middleweight roadster’s 659 cc parallel twin-cylinder engine with a 270-degree combustion interval additionally gets a 5 hp increase in peak power output to 100 hp, essentially matching that of the RS660 sportbike, while peak torque figure remains unchanged with 67 Nm at 8,500 rpm, of which 80% is available from 4,000 rpm or 90% of peak torque at 6,250 rpm, says Aprilia.

Stronger acceleration is promised by shorter final drive gearing, with a 16-tooth front sprocket (one less than on the Tuono 660) with a 43-tooth rear sprocket. Transmission is a six-speed gearbox that now comes equipped with an up-and-down quickshifter. 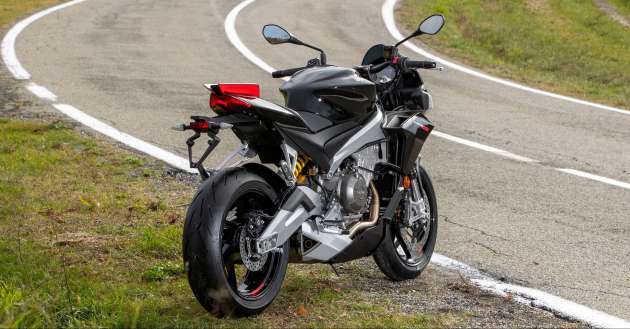 In addition to increased peak power and shorter gearing, the Tuono 660 Factory also benefits from weight loss, where a lithium-ion battery contributes to a reduction of 2 kg to a kerb weight of 181 kg. Seat height on the Tuono 660 Factory is identical to the base Tuono 660 at 820 mm, as are its headstock angle and trail length of 24.1 degrees and 104.7 mm, respectively. Fuel tank capacity remains at 15 litres.

Suspension on the Tuono 660 Factory is by a 41 mm Kayaba front fork and Sachs rear shock with remote reservoir, both adjustable for compression, rebound and preload; a setup that is “better suited to sports riding,” says the Noale-based manufacturer.

Wheels are 17-inch items shod in 120/70 front and 180/55 rear tyres, the latter alternatively available in a taller 180/60 size. Braking is by dual 320 mm discs and Brembo calipers, while a 220 mm rear brake disc gets a Brembo caliper, and both use metal-braided brake lines.

Like the base Tuono 660, the Tuono 660 Factory gets five customisable ride modes, itself similar to those on the RS660, but the Factory variant adds a six-axis inertial measurement unit (IMU) to augment the Aprilia APRC rider aids suite comprised of traction control, wheelie control, and in particular now enables cornering ABS.

Also included on the Tuono 660 Factory are adjustable engine braking and cruise control. The addition of the six-axis IMU also enables the bending lights function for its LED headlamps with DRLs, which adjusts the angle of the light throw to suit the lean angle sustained through a turn.

In terms of paint finishes, you can have your Tuono 660 Factory in any colour as long as it’s the Factory Dark scheme pictured here. Further adding visual distinction between the Factory and the base Tuono 660 is the single-seater tail fairing, like that on the RS660.

Tesla: Model 3 Is The First EV Priced On Par With ICE Equivalents