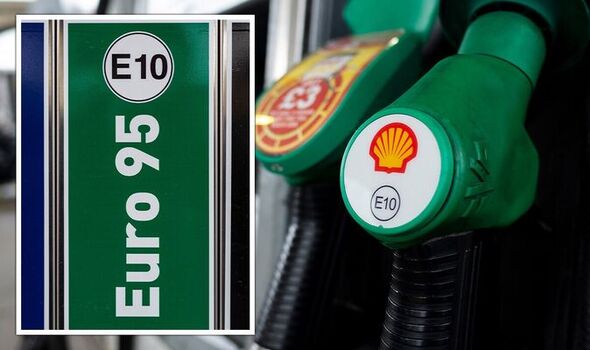 The Government hopes the new fuel will slash emissions in the country as it moves towards its goal of net zero emissions by 2050. E10 petrol is blended with up to 10 percent renewable ethanol and will help Northern Ireland to decarbonise transport, as it is greener than existing petrol.

Around 95 percent of petrol cars are already compatible with E10 petrol, but the Government’s campaign promotes a checker to enable drivers to see if their car can use it.

Despite the environmental benefits, many motorists have complained that they need to fill up more often.

When the petrol was first launched in England, Scotland and Wales, the Government stated that E10 could lead to a drop in fuel economy.

It was said that it would generally only be around one percent, and that other factors like driving style have a much greater impact.

Motorists have been complaining about the fuel, claiming they have noticed changes to their efficiency.

One Express.co.uk reader said: “E10 is completely rubbish. My oldish Mercedes was running like a camel.

“Put E5 and everything runs smoothly again, better mpg. Worth the extra expense.”

Another commenter, using the handle rubybandit12, questioned the environmental benefits of the fuel.

They claimed: “How can burning much more fuel over a much shorter distance be beneficial to the environment?

“If the performance and fuel economy were the same with E5 and E10 then yeah go for it but E10 is utter rubbish.

“Just a scam to rob the motorists again.”

Its use across the UK could contribute to cutting transport CO2 emissions in the UK by potentially 750,000 tonnes a year.

This is equivalent to a forest the size of the Isle of Wight capturing carbon every year.

However, not everyone is feeling the effects of E10 on their car, with some arguing that they haven’t seen a difference with their efficiency.

An Express reader, Kim Amey, pointed out that E10 had been used in other countries for years and at higher levels.

They claimed: “I’ve been using it for 10 years in my Honda Jazz with no problems.

“As I’ve never used anything else in it I’ve no way to compare fuel consumption. My Prius seems about the same since changing but then it’s not totally petrol powered.”

E10 has been used across Europe and in other parts of the world for many years, with the USA introducing it in 1990.

Higher blend fuels are also available around the world with France and Sweden using E85, a blend of 15 percent fuel and 85 percent bioethanol.

E10 has been introduced in the UK as part of the Transport Decarbonisation Plan which aims to develop a net-zero transport sector by 2050.