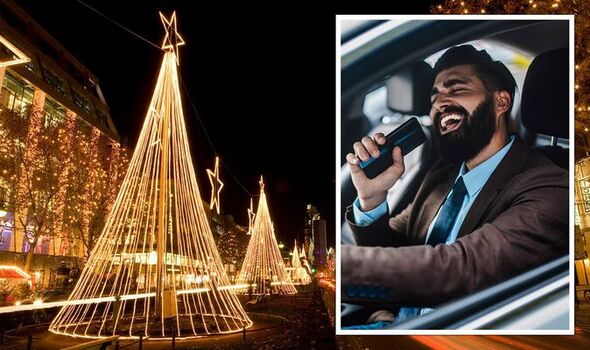 Experts at Nationwide Vehicle Contracts warned that playing Christmas songs too loudly could distract road users and put “others at risk”. Motorists may also not be able to hear any road hazards that could see them issued with penalties for dangerous driving.

The experts said: “We all like to sing along to Christmas songs during the festive period, but you should be careful as doing so can land you fines up to £5,000!

“According to the Highway Code, if you were to play your music too loud it could be classed as a distraction, and leave you with up to three points on your licence and a £100 fine this Christmas.

“In more severe cases, if your music was loud enough to obstruct you from hearing potential hazards, this could put others at risk and you could be liable for ‘driving without due care and attention’ or ‘dangerous driving’ charges.

“These are serious charges that can lead to driving bans and up to £5,000 in fines from your Local Authority.”

However, West Yorkshire Police previously said it is likely officers would only take action if they hear the noise themselves.

They said they would be unlikely to take action after a one-off incident but would follow up if it was a “persistent problem”.

They added: “At present legislation only provides the local authority with the power to take action against loud car stereos if the car is on private land or parked on the street.

“If there is a car/a group of cars that is parked up constantly on your street and the stereos are being played very loud then you need to make a complaint to your local authority.

“The police also have powers to deal with cars playing loud music (whilst driving and stationary) although the officers would have to be present and hear the noise before they could take any action.

“If it is a one-off occurrence then neither the police nor the local authority will be likely to take any action.

“If, however, it is a persistent problem then either contact the local authority or your local police via their 101 number.”

Playing music too loudly can see drivers punished at any time of the year. Experts at USwitch also previously warned that drivers could be penalised if they are distracted by music in their vehicles.

However, they still claimed it was safer to play music through a stereo than through headphones which can cut out other noises.

They said: “Most drivers have music playing through their car’s sound system to remain aware of surrounding noises. This is likely to be safer than using headphones.

“Playing loud music is usually not illegal, but it can still land you a penalty. According to the Highway Code, loud music that is deemed a distraction can result in a £100 fine and three points on your licence.

“In more extreme circumstances, if you have music so loud that it hinders your awareness, you can be hit with a £5,000 fine and possibly a driving ban.”

Drivers are also being warned that their choice of Christmas attire this winter could land them with a hefty fine.

Driving with clothes that either impede the driver’s ability to control the car, or that could distract other drivers, may lead to a £5,000 fine and as many as nine points on the licence, according to Motoring experts National Tyres and Autocare.

Wearing inappropriate footwear when driving – whilst not technically illegal – could be in violation of Rule 97 of the Highway Code, which states: “You should ensure clothing and footwear do not prevent you using the controls in any manner.”

Therefore, wearing high heels or boots, which can limit the driver’s ability to move their ankles and control the pedals, may be considered driving without due care and attention.

Similarly, wearing a fancy dress costume behind the wheel could significantly impact the driver’s ability to control their car.

Failure to have proper control of a vehicle could lead to a maximum fine of £5,000, as well as a discretionary disqualification and points on the licence.

SST exemption beneficial to the automotive industry, but up to the finance ministry to decide on an extension – Wee – paultan.org