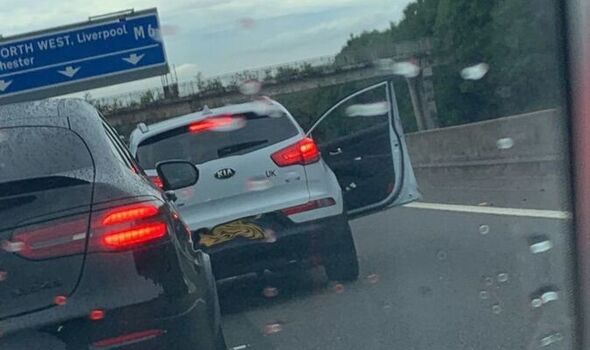 While trying to save the life of a motorcyclist involved in a collision with a white Peugeot 208, emergency services shut down the fourth lane of the northbound M6 and an investigation got underway. However, as the hours passed, a number of impatient drivers attempted to use the third lane to overtake.

One furious driver eventually moved their car into the third lane and opened their door to stop other vehicles from passing, reports StokeonTrentLive.

Police have since confirmed that a 65-year-old man was pronounced dead at the scene near Keele Services, between junctions 15 and 16 following the collision shortly after noon yesterday.

The M6 northbound was eventually reopened around four hours later after traffic was diverted on the A500 leading to standstill queues to get onto the Keele/Hanford roundabout in Stoke.

A Staffordshire Police spokesman said: “Police were called at 12.20pm this afternoon to reports of a collision on the northbound carriageway of the M6 near Keele Services, between junctions 15 and 16.

“Paramedics from West Midlands Ambulance attended, as well as an air ambulance.

“Sadly, despite the best efforts of medical staff, the motorcyclist, a 65-year-old man from the Wiltshire area, was pronounced dead at the scene.

“Specialist officers are supporting the man’s family at this difficult time.

“Witnesses who may have seen the vehicles before the collision or anyone with relevant dashcam footage are urged to get in touch.”

In a statement, West Midlands Ambulance Service said: “We were called at 12.07pm to reports of an road traffic collision involving a car and motorbike between junctions 15 and 16 of the M6 North.

One person said: “Absolutely shocking and no respect! Some people are just so much in a rush nowadays and are so selfish.

“Where is the respect and compassion for our emergency services and dignity for the wounded? These selfish drivers need naming and shaming to be honest.”

Another person wrote: “Good for them. They do this at road works, trying to push in at the last minute, causing hold ups to other traffic.

“I won’t let them and I will put my car/truck in place to stop them getting passed, way before the road works start.”

A third person commented: “No respect whatsoever. One day it may be their family member that’s hurt or worse and then how would they feel?”

Rimac Nevera Receives US Homologation And Green Light For Deliveries