We may be contradicting Betteridge’s law of headlines, which states that any headline ending in a question mark can be answered with ‘no,’ because we don’t really see another reason why a Lucid Air was seen at Ford’s Dearborn, Michigan facility posing next to a Mustang Mach-E. It’s probably not for benchmarking the Mach-E against it, but perhaps Ford will compare some other future electric offerings to it.

These photos were sent to us by our spies without any context, so we had to try to explain what they show. It could just be a Lucid owner who knew someone at Ford brought their own personal Air just for Ford guys to take a look around the vehicle, but there’s probably more to it than that.

You may remember that Lucid Airs started popping up for sale on eBay and that may, in fact, be where Ford could have picked this example up. It’s surely one of the 520 Dream Edition models, but it has the smaller wheels on it, the 19s that were on the Air in which our own Tom Moloughney managed to go 500 miles on one charge. 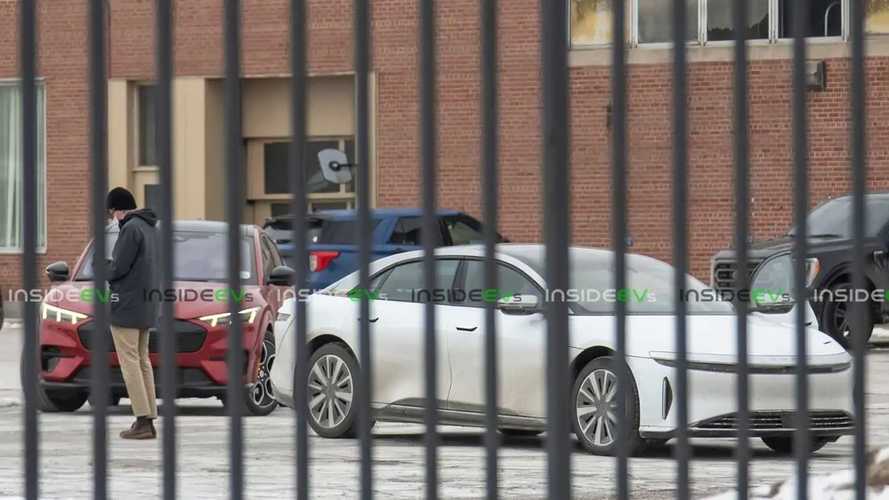 It’s these wheels that allow the Air to achieve its maximum range, so perhaps this is the kind of test or benchmark that Ford is going to use this for, if it actually turns out to be a vehicle that it bought for benchmarking purposes. The Blue Oval has several EVs in the works right now, including one that it will build on Volkswagen’s MEB platform.

But the manufacturer has not announced any plans, and we heard no rumors about a possible long range luxury sedan from Ford. This leads us to believe that perhaps this Air could be used as a benchmark for an upcoming Lincoln EV, possibly the Mark E electric SUV that was recently teased and is expected to be revealed this year, although that would most likely still just be benchmarked against a vehicle with a similar body style.

We still think that either Ford or more likely Lincoln is working on a vehicle that’s similar to the Air, otherwise it would have chosen another vehicle from a rival brand to compare against.

Lincoln did show off a close-to-production all-new Zephyr sedan (the Zephyr Reflection study shown at Auto Shanghai 2021), but the manufacturer never said it intended to sell it anywhere outside China. The automaker also didn’t make it clear what type of powertrain this vehicle would have, but it appears to have a completely closed grille in the front and no tailpipe in the rear.