One of the most intriguing debuts at this year’s New York International Auto Show is a 2,200-horsepower electric hypercar called Deus Vayanne.

A collaboration between Vienna, Austria-based Deus Automobiles, Italdesign and Williams Advanced Engineering, the Vayanne aims to become the first electric vehicle in automotive history to cross the 2,200-horsepower mark—unless someone else launches an even more powerful EV by 2025 when the Vayanne is expected to enter production.

If the startup’s goal is achieved, the electric hypercar would be significantly more powerful than the Lotus Evija (1,970 hp) and Rimac Nevera (1,914 hp).

Supported by Italdesign’s styling and engineering expertise and Williams Advanced Engineering’s electrification technologies, the production target for the Deus Vayanne is 99 units, with deliveries to start in 2025.

The preliminary specs are nothing short of impressive, with Deus Automobiles citing more than 2,200 horsepower (1,640 kW) and over 2,000 Nm (1,475 lb-ft) of torque from an unspecified battery-electric powertrain.

The company estimates the 0 to 62 mph (100 km/h) sprint will be delivered in under 1.99 seconds and the top speed will exceed 400 km/h (248 mph). The acceleration and top speed are very similar to the Tesla Roadster, by the way. 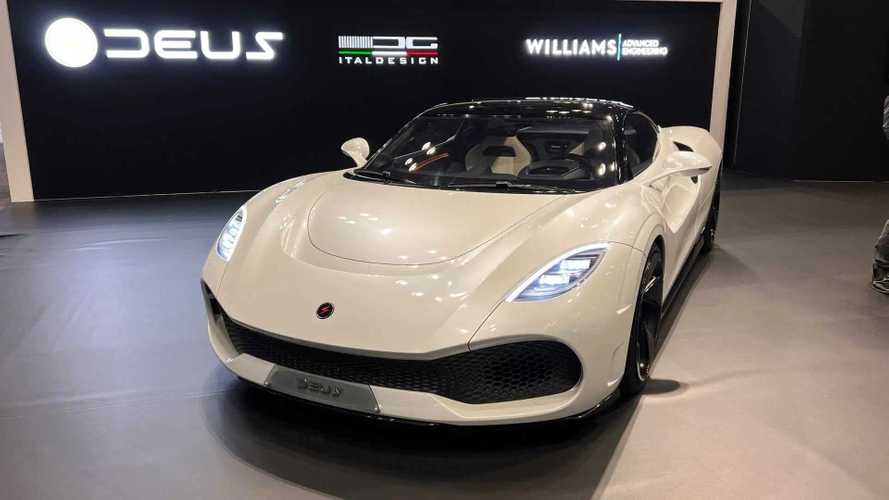 Unfortunately, the press release focuses on the Deus Vayanne’s design rather than technical bits, so we don’t know exactly how the electric hypercar will deliver those impressive specs.

However, the startup says the Vayanne production model will showcase a new approach of Williams Advanced Engineering’s electrification and production capabilities, together with Italdesign’s engineering and styling proficiency.

“Building on our existing and successful collaborative partnership with Italdesign, we are delighted to be part of the world premiere for the DEUS Vayanne, a hypercar that seeks to combine luxury with ultimate performance. Working as the Electrification and Technology Partner, we look forward to employing our expertise in electrification to support the programme’s performance targets.”

Deus Automobiles mentions a ground clearance of 4.7 inches and useable storage space, with the Vayanne said to deliver a comfortable, luxurious ride and maximum day usability along with outstanding performance.

Now, we’ve heard similar performance claims for startups many times, but the thing that’s encouraging about the Deus Vayanne is the partnership with Italdesign and Williams Advanced Engineering. Having a prototype also helps, although it’s unclear whether it’s fully functional or if it even features a powertrain.

As for its styling, the Deus Vayanne certainly looks exotic, with highlights including the infinity loop shape of the front and rear grilles and the uninterrupted taillight strip taking the same shape. The rest of the exterior looks pretty conventional, as does the interior which features smooth curves combined with an ergonomic positioning of physical controls plus a fully digital instrument cluster and control display.

Mercedes SUVs: There Are Many, So Which Is Right for You?

Report: Tesla's Plan To Restore Full Production In China Is Delayed A Week