Aston Martin certainly intended the DBX to be its volume model, one that it had planned off and on for about a decade. Just how much of a volume model it would become was up in the air, as the DBX was conceived in one economic climate and arrived on sale in a markedly different one, overshadowed by the economic turmoil of the pandemic as well as the chip shortage.

With the release of the automaker’s third quarter results we now know just how much of a role the DBX has played in its short time on the market, accounting for 2186 of all Aston Martin deliveries in the first nine months of the year, while all other models combined accounted for 2064 delivered vehicles. And it did so while facing some issues related to the job cuts at the St. Athan plant that produces the model.

“I am pleased with our performance to date, delivering strong results in line with our plans to improve profitability,” said Aston Martin CEO Tobias Moers. “The shift to a demand-led, ultra-luxury operating model achieved earlier this year continues to support strong pricing dynamics with order cover through 2021 and extending into 2022.”

The automaker’s wholesale volumes year-to-date also dwarfed those of 2020, with the automaker posting 4250 deliveries compared to 1555 in the first nine months of the previous year, though Aston Martin still posted a loss, albeit a smaller one. The automaker’s losses stand at £188.6 million ($254.5 million) through the first nine months of 2021, compared to losses of £307.9 million ($415.5 million) in 2020, even though revenue rose by 173%.

A big part of the reason for the posted loss is that Aston Martin is busy making payments a £1.1 billion loan it took out a year ago, one which will take some more time to repay. So smoother sailing is not necessarily right around the corner, even with help from DBX sales. 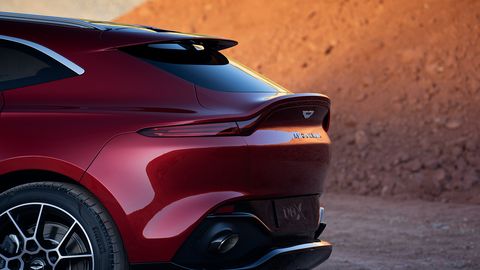 Of course, the DBX’s impact on the automaker is just gaining momentum, with the model being in its second year of production, with the first having been affected by a multitude of factors related to the pandemic. But the DBX certainly appears to be on course to right Aston Martin’s ship in the longer term.

Just where is the DBX selling the best?

Aston Martin noted that Asia-Pacific and the Americas were the markets with the strongest demand for the SUV, representing 28% and 34% of wholesales, respectively, with China alone being responsible for 16% of the model’s sales worldwide. No big surprise there, as the Chinese luxury car market had also rebounded the fastest following the worst months of the pandemic. With a starting price just under $180,000 in the US, the DBX is also one of the more affordable models from the automaker, offering competition to quite a diverse cast.

The trajectory of the DBX role certainly mirrors a few other SUVs and crossovers from exclusive sports car makers we can name, from the Porsche Cayenne to the Bentley Bentayga to the Lamborghini Urus, but it’s still surprising how quickly the DBX has upstaged the rest of the lineup. The automaker had pinned quite a few hopes on the model, after a few missteps a decade ago, including a particularly unfortunate Lagonda SUV concept. But its success still comes amid an unprofitable environment for Aston Martin, just as the automaker readies the long-awaited Valkyrie hypercar for deliveries in the coming weeks.

It will certainly be interesting to see how the brand’s positioning will evolve with the DBX at the helm as having an SUV thoroughly dominate sales is uncharted territory for Aston Martin.

Will there be pressure to focus on DBX variants, now that Aston Martin has had its first taste of a volume offering? It’s also quite clear that a lot of DBX buyers are new to the brand, and may not have otherwise considered it but for the debut of a luxury SUV. Executive Chairman Lawrence Stroll also credited the automaker’s brand awareness and marketing activities on the positive sales growth this year.

“The excitement around and demand for the brand are tremendous, with good visibility for sales, increased interest to be part of our journey from potential new dealers and fantastic demand for our limited run Specials,” Stroll noted. “The Aston Martin Cognizant Formula One Team is significantly expanding our audience with over 87 million people per race seeing our brand in the heat of intense performance competition.” 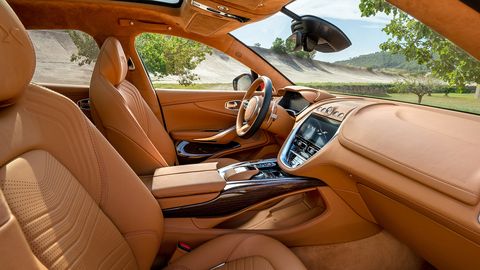 It’s a little early to declare the DBX to be the company’s financial savior, but it’s certainly on its way to assuming that role for the next few years. And it’s also easy to call the DBX’s arrival overdue as well, as the automaker likely stood to benefit more from DBX sales had it launched the model five years prior, during a much more favorable economic climate. With electrification on the horizon, the DBX still has a few years of sales ahead of other pressures that will be exerted upon its maker.

The automaker expects wholesales to end up around 6000 units by the end of the year, anticipating that yearly number to land around 10,000 by 2024-25. So the DBX still has some work cut out for it to make these numbers happen.

Should Aston Martin offer another SUV or crossover, positioned below the DBX? Let us know in the comments below.