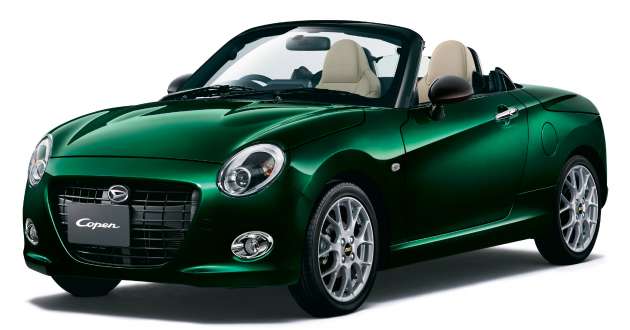 Daihatsu is celebrating the 20th birthday of the Copen this month by introducing the 20th Anniversary Edition. Set to go on sale in Japan this September, only 1,000 units of the special Copen will be offered to celebrate the pint-sized roadster that first made its debut in June 2002.

Based on the second-generation (LA400) Copen that has been around since 2014, the Anniversary Edition is powered by the same KF-DET 658 cc turbocharged three-cylinder engine found in the regular Copen, as per kei car regulations.

The mill outputs 64 PS at 6,400 rpm and 92 Nm of torque, with drive going to the front wheels via a five-speed manual with a limited-slip differential. The alternative is a Super Active Shift CVT that doesn’t come with the LSD, but you do get paddle shifters.

While the powertrain remains familiar, the Anniversary Edition does come with a front brace to reinforce the chassis, along with a set of BBS 16-inch forged wheels designed specifically for it. Also seen on the exterior are bi-angle LED headlamps with black trim, chrome-plated door handles and model-specific badging.

Inside, you’ll find more “20th Anniversary” badges, a numbered plaque on the driver’s side scuff plate, Ivory leather upholstery, sports seats with “Copen” embossed on the headrests, a silver-accented instrument panel with a black base and red needles, as well as a leather-wrapped steering wheel from Momo.

The 20th Anniversary Edition joins the normal Copen and four other variations offered in Japan, including the Robe, XPlay, Cero and GR Sport. Pre-orders for the new celebratory model are now open, with pricing to be announced at a later date.