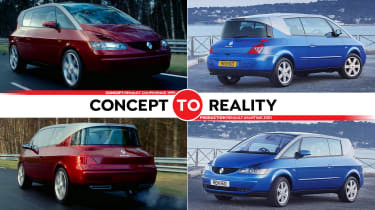 Of all the recent car industry trends, the decline of the MPV is one of the easiest to plot. Buyers have moved away from these traditionally boxy models towards SUVs, forcing many brands to leave the market altogether.

Back in the nineties, though, the MPV was king. And Renault, a pioneer of the breed, provided perhaps the peak of the era by offering a ‘coupé MPV’ – even though the original idea for the car didn’t come from within the French manufacturer at all. This is the tale of the Renault Avantime.

It’s hard to define the first true MPV, but the Renault Espace would be on the shortlist. Introduced in 1984, the car was actually conceived by British designer Fergus Pollock in the previous decade, only to be rejected by PSA Peugeot Talbot.

But it was picked up by Renault and industrialised for the company by French engineering consultancy Matra. As part of the arrangement, the Espace would be built by Matra itself, at its factory in Romorantin. So both parties were naturally delighted when the idea proved a smash hit with customers, who lapped up the Espace’s mix of a huge, airy glasshouse and a boxy shape that could cope with pretty much any everyday load.

The arrangement extended into the second-generation Espace, then the third. By the end of the nineties, Matra’s automotive boss Philippe Guédon believed that Espace devotees were so taken by the concept that they were continuing to want one long after they had need of its practicality. The idea of an ‘Espace for empty nesters’ was born. And Matra, keen to bolster its own manufacturing order book, didn’t waste any time in pitching the idea to Renault. 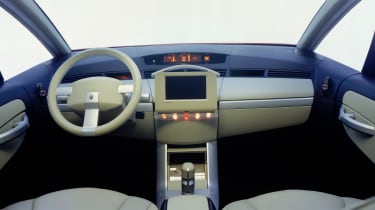 The concept that resulted from these early conversations was called Coupéspace – a striking red creation that made its public debut at the 1999 Geneva Motor Show. There were clear Espace overtones, especially around the nose and bonnet line. But there were more pronounced shoulder lines along the flanks, a striking contrast-colour roof, chunky alloy wheels – and a single door on each side.

This was a sporty creation, an MPV that you were supposed to want, rather than need. In fact, the Coupéspace was nine tenths of a production car, having had extensive input from Patrick Le Quément, the visionary Renault head of design who had already created the original Twingo and Mégane.

The Espace construction methods – in effect, a plastic body on top of a steel chassis – meant that Le Quément and his team didn’t have to play around too much with the Coupéspace to create the production model, called Avantime, which appeared two years after the concept.

Extensive strengthening meant that there was no need to introduce a B-pillar. The huge glasshouse remained, along with a panoramic roof that made the cabin feel even more spacious. But Renault did have to come up with a novel solution for the enormous doors, so it engineered an intricate double-hinge system that moved them outwards as well as forwards. 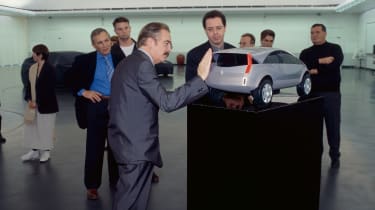 Sadly for Matra, the Avantime lived up to its badge by being ahead of its time. In fact, it was a step too far for customers, many of whom were starting to buy into the emerging trend of SUVs, cars that still offered plenty of practicality without screaming about their owner requiring it.

Sales were pitiful, and since Matra had already lost the production contract for the regular Espace, it decided to kill off the Avantime itself after just three years of production, with fewer than 9,000 units having been produced. As a final kick in the teeth, those complex hinges struggled to cope with the weight of the huge doors, so ‘Avantime sag’ became a key phrase for anyone looking at a used example.

Within weeks of the Avantime’s demise, the Romorantin factory that built it was closed, and Matra itself went on to be acquired by the world-famous Italian design house Pininfarina less than six months later.

The Espace survived; it’s still sold in continental Europe, having adopted a more rakish look that’s half-MPV, half-SUV. But the genre that it pioneered is unlikely to ever reach the same heights again. If you ever want proof of how popular MPVs once were, just look at the Avantime and remember that at the end of the nineties, someone considered it an idea worthy of being turned from concept to reality.

What did you think of the Renault Avantime? Let us know in the comments below…

Mitsubishi Gives Us First Contact With Eclipse Cross Redesign for 2022