The sixties-inspired Jaguar F-Type celebrates the diamond anniversary of iconic E-Type with new 20-inch rims, plus special interior and paint colour lifted from the original car 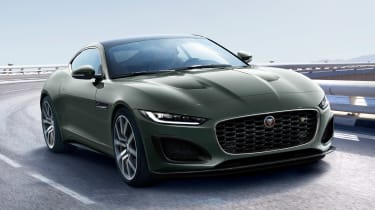 Jaguar has announced it is marking the 60th anniversary of the legendary E-Type with a new F-Type Heritage 60 Edition that will be priced from £122,500 when it goes on sale this spring 2021.

Limited to just 60 cars, the new special edition Jag is based on the flagship 567bhp 5.0-litre V8 supercharged all-wheel drive F-Type P575, with each version hand-finished by the car-maker’s SV Bespoke division.

Highlights of the commemorative F-Type coupe and roadster include Jaguar reviving its original Sherwood Green paint for the F-Type Heritage 60 Edition – a colour that was used on the original E-Type and not offered by the British car-maker since the 1960s – and blended with traditional chrome and gloss black accents, plus a set of large forged 20-inch alloy wheels.

Inside, the period paint is combined with contrasting brown Caraway and Ebony Windsor white leather that’s never been used in the F-Type before. The nod to the E-Type’s past continues with aluminium trim employed for the centre console that’s claimed to mimic the original’s rear-view mirror casing. 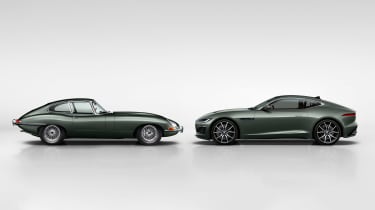 Finally, E-type 60th anniversary logos have been embossed on the headrests of the standard lightweight Performance seats, while yet more E-type 60 Collection badging is dotted around the car.

Jaguar has not confirmed any special engine upgrades for its anniversary F-Type – not that its needs anymore help in the performance department. The standard F-Type R dispatches the 0-60mph sprint in just 3.5 seconds, with a top speed of 186mph.

Priced from £122,500 for the special F-Type Heritage 60 Edition coupe and £127,600 for the droptop convertible version, Jaguar says both anniversary F-Types can be ordered now with deliveries timed to coincide with the E-Type’s official diamond anniversary celebrations in March 2021.

As well as the special edition F-Types, Jaguar Classic announced back in August that it is restoring six matching pairs of E-Types for sale as part of the celebrations. Prices for these limited edition, 60th anniversary E-Types are yet to be confirmed but, given that Jaguar’s standard restored E-Type’s are priced from around £600,000 each, expect a price well in excess of that figure.

What do you think of the limited Jaguar F-Type Heritage 60 Edition? Let us know in the comments section…