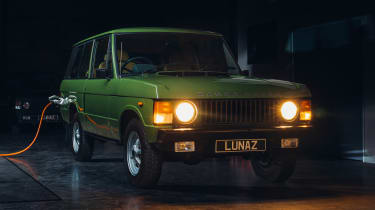 Lunaz, a British engineering and restoration firm, has re-engineered the classic Range Rover with an electric powertrain. Prices for the conversion start from £245,000 (excluding tax) and, for now, production will be limited to just 50 units – all of which will use donor cars built between 1970 and 1994. First deliveries are expected to arrive by summer 2021.

Like the brand’s pure-electric conversion packages for the 1953 Jaguar XK120 and the 1961 Rolls-Royce Phantom V, this Range Rover EV kit starts with a full strip down and restoration of each car’s body and chassis, before the electric running gear is fitted.

Like the brand’s other electric creations, the Range Rover’s original fuel filler cap will house the powertrain’s charging socket. The 4×4’s original dials will also be retained, albeit modified to display information about the battery’s charge state and remaining range.

During the restoration process, buyers can even choose to have the rooves chopped off their cars, with a design that mirrors the custom convertible Range Rover from the 1983 James Bond film, Octopussy. 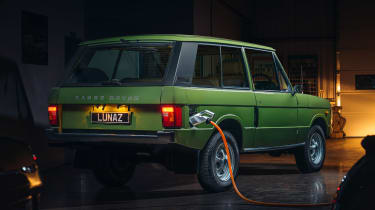 Two specifications will be available, called “Town” and “Country.” The former is designed for customers who want to use their cars as a luxury runabout and includes a plush interior with a bar area for the rear bench, which Lunaz will tailor to suit the owner’s preferred drink.

Country specification is aimed at those who aren’t afraid to take their Range Rovers off-road. It adds upgraded suspension, improved brakes, thicker anti-roll bars and a four-wheel-drive system. Lunaz will even design the Range Rover’s boot space and storage areas around the buyer’s hobbies, fitting tie points and partitions to cater for any specific equipment.

Every Lunaz electric Range Rover also comes with a host of modern amenities – all of which have been designed to blend with the 4×4’s classic interior. Upgrades include on-board WiFi, an infotainment system, sat-nav, a new stereo and modern air conditioning.

Like the Lunaz Jaguar XK120 and Rolls-Royce Phantom, the Range Rover EV features the firm’s in-house battery and electric motors. The entry-level “Town” specification comes with a 60kWh pack and a single electric motor mounted on the rear axle, while the flagship model will feature an 80kWh unit and a motor on each axle.

Performance figures are yet to be confirmed, but Lunaz has said that it’s targeting a maximum range of around 250 miles.

What do you make of Lunaz’s pure-electric version of the classic Range Rover? Let us know in the comments section below…