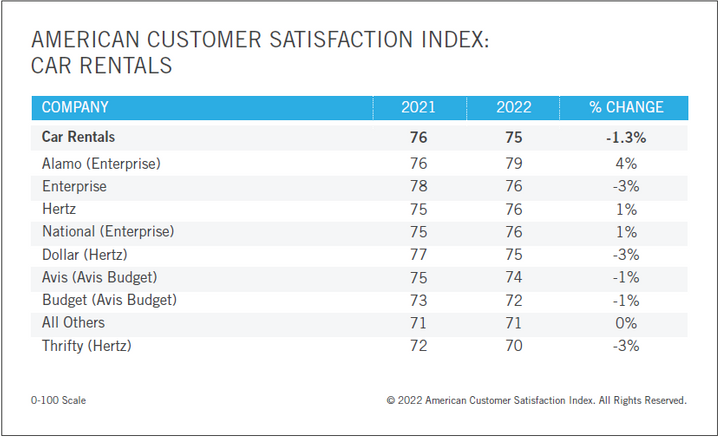 “Many folks ventured out to travel for the first time since the pandemic hit only to be met with lackluster service and dashed hopes,” said Forrest Morgeson, ACSI’s director of research emeritus. “We see this with hotels, where the quality of amenities and food services both dip below customer experience benchmarks of 70. Anyone who anticipated their travel experience would feel like the ‘normal’ pre-pandemic days are likely coming away sorely disappointed. While the desire to travel may be up, it might be time to adjust your expectations.”

In the airline industry, as passenger satisfaction dropped 1.3% to an ACSI score of 75. JetBlue flew into the top spot, up 3% to a score of 79. American and United, both up 3% to a score of 77, climbed into a four-way tie for second with Delta and Southwest, which dropped 3% apiece. Alaska decreased 3% to a score of 75, followed by the smaller carriers (down 4% to 71) and Allegiant (down 3% to 70). The bottom of the industry included Frontier, which slumped 3% to 66, and Spirit, which tumbled 5% to 63.

For the hotel industry, overall guest satisfaction fell 2.7% to a score of 71, with over half of the major hoteliers posting ACSI declines of 4% or greater, according to the study. Marriott became the industry satisfaction leader after improving 3% to 78. Last year’s leader, Hilton, finished second after dropping 4% to a score of 76. Best Western stayed steady at 75, just ahead of IHG, which dropped 5% to 74. Choice and Hyatt each scored 73, but the former increased 3% while the latter fell 4%. Wyndham remained stable at 69. The bottom of the industry belonged to G6 Hospitality (Motel 6), dropping 15% to a score of 56.

Overall, user satisfaction with online travel agencies increased 1.4% to an ACSI score of 75, according to the study. The group of smaller online travel sites took the top spot after increasing 5% to a score of 77. Orbitz is next, improving 1% to 76, followed by Tripadvisor, down 1% to 75. Expedia and Travelocity both scored 73, decreasing 1% and 4%, respectively. Priceline remained at the bottom of the industry after dropping 1% to 72.