BYD does not slow down. In November, the automaker set its ninth consecutive monthly global wholesale sales record (and 10th record this year, as only February was a bit slower than January).

The overwhelming majority of BYD sales are in China, while exports stand for a few percent of the total result.

Both all-electric and plug-in hybrid car sales have been above 100,000 units per month since October and growing.

Nothing is determined, but we would not be surprised if the Chinese company is able to exceed 250,000 in December.

Some 12,318 BYD plug-ins were exported, which also is a new record. Besides passenger cars, BYD sold 485 commercial electric vehicles for a total of 230,427 plug-in vehicles last month.

So far this year, the company sold over 1.62 million plug-in electric cars, more than tripling its volume compared to 2021.

During the last 12 months, the company sold more than 1.7 million plug-ins, while the cumulative number is at 3.1 million. 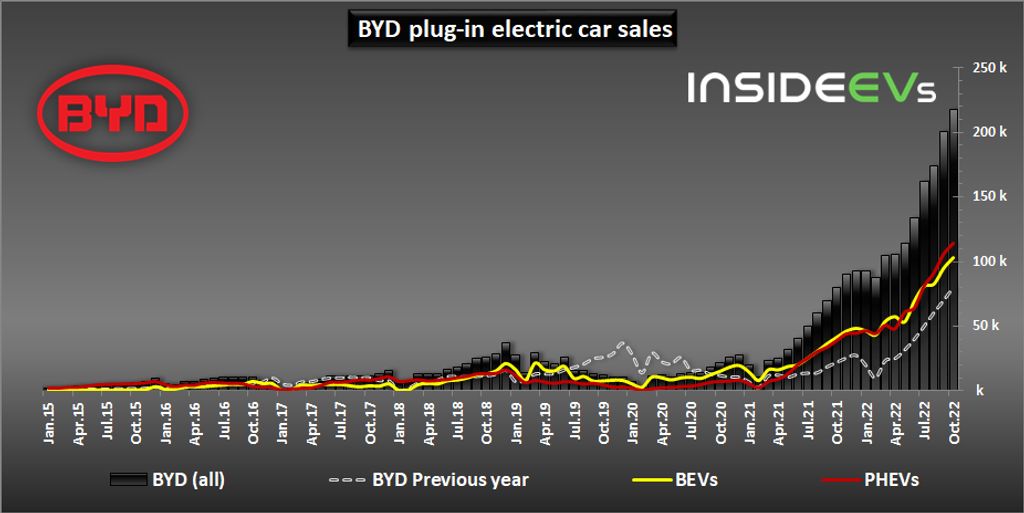 As usual, many individual models set their own monthly records. The top one is the BYD Song family, which noted a total of 64,145 (BEVs and PHEVs). That’s another new monthly record for the Song.

The BYD Dolphin and BYD Seal continue their expansion with new records of respectively 26,063 and 15,356. Meanwhile, the BYD Destroyer 05 plug-in hybrid surprisingly slowed down a little bit during the ninth month on the market to 6,032 (after over 9,000 in October).