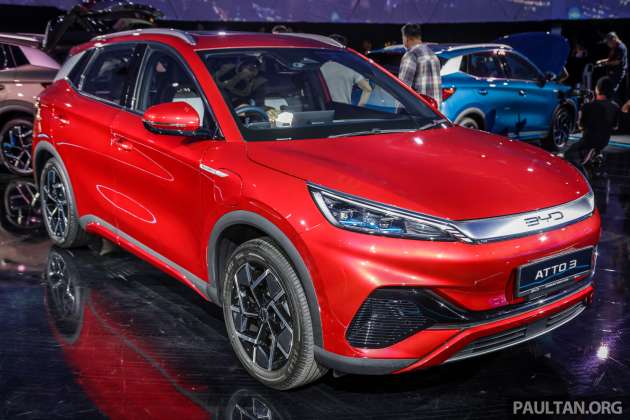 As previously reported, the BYD Atto 3 will be sold in Japan beginning January 2023, followed by the Dolphin in mid-2023 and the Seal by the end of the next year.

It’s now revealed that only one variant of the Atto 3 EV will be available in the Land of the Rising Sun, priced from 4.4 million yen (RM142k). The asking price is far less than the EVs currently available in Japan including the Nissan Ariya and Tesla Model 3 which are priced above five million yen (RM161k).

The Atto 3 produces 150 kW (204 PS) and 310 Nm from a front-mounted electric motor. It draws power from a 58.56 kWh battery offering 485 km of electric range based on the WLTC cycle. The Atto 3 will feature the full suite of advanced driver assistance systems, Vehicle-to-Load (V2L) and Vehicle-to-Home (V2H) systems.

Sold by BYD Auto Japan, the company also announced plans to build a sales network of more than 100 stores throughout Japan by the end of 2025. By the end of January 2023, the company plans to have 22 stores in operation. While BYD’s presence in the passenger car segment will soon be felt, this isn’t the brand’s first foray into the Japanese automotive market as it holds a 70% market share in the local commercial electric bus segment.

In its home country, BYD was China’s top-selling car brand last month, beating Volkswagen. It was also announced recently that the company has sold one million new energy vehicles (NEV) in the last six months alone. As of last year, BYD was the third largest EV producer, behind Tesla and the Volkswagen Group.

Teslounge Tesla Showroom In Romania Is Not Actually Owned By Tesla

Report: Tesla Will Upgrade Its Plant In Shanghai To Boost Production