BMW Malaysia has updated the pricing of its models for 2023 on its online configurator, with multiple increases of varying amounts. For now, we only have on-the-road figures with the extended warranty and service packages factored in, but we’ll update this space once we have the updated price list that includes just the standard two-year warranty.

Let’s start with what remains unchanged. All variants of the G20 3 Series maintain the same prices as 2022, which isn’t surprising given the facelifted model is expected to be launched this year. The same is also true of the F48 X1 range, which is expected to be replaced by the U11 X1 that made its global debut last year.

Other models that see no change to their pricing include the all-electric iX3, which was already revised last April and likely got another price bump after then to the current figures of RM322,800 for the Inspiring and RM343,800 for the top-spec Impressive.

Last but not least, the M850i xDrive MY Edition launched last September keeps its RM1,102,800 price tag. As for the M3 and M4 line-up, there’s no new pricing listed on the configurator, with customers being directed to a reservation page instead. 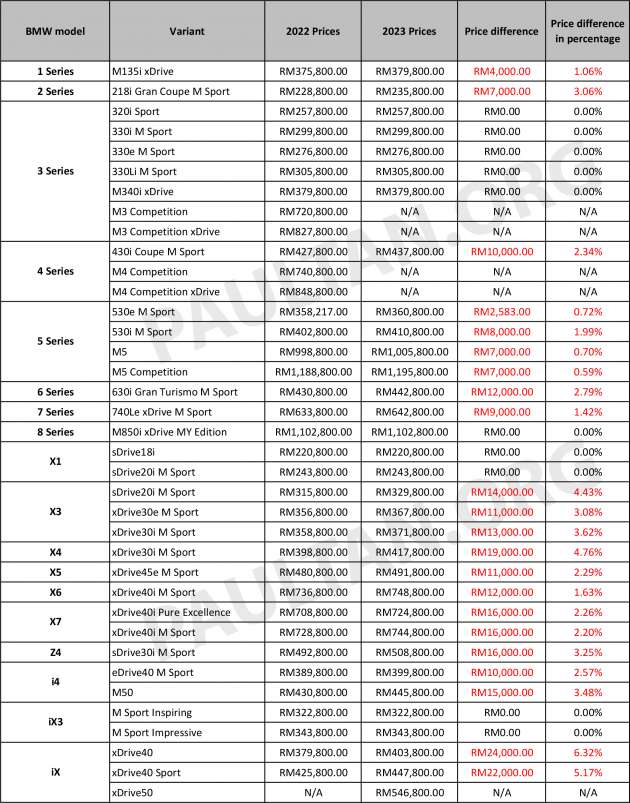