BMW partners with famous artist Jeff Koons to create a limited run of 99 units of the 8 Series Gran Coupe that are rolling pieces of art. The company calls the vehicle The 8 X Jeff Koons. The automaker will sell the first one to benefit charity as part of a Christie’s auction in New York on April 4. The rest of the examples will retail for $350,995 after destination in the United States.

All of these special cars start as a M850i xDrive Gran Coupe. In front, there’s a yellow front fascia with blue accents below the headlights and white shapes on each side that look like the sound effect drawings in a comic book. 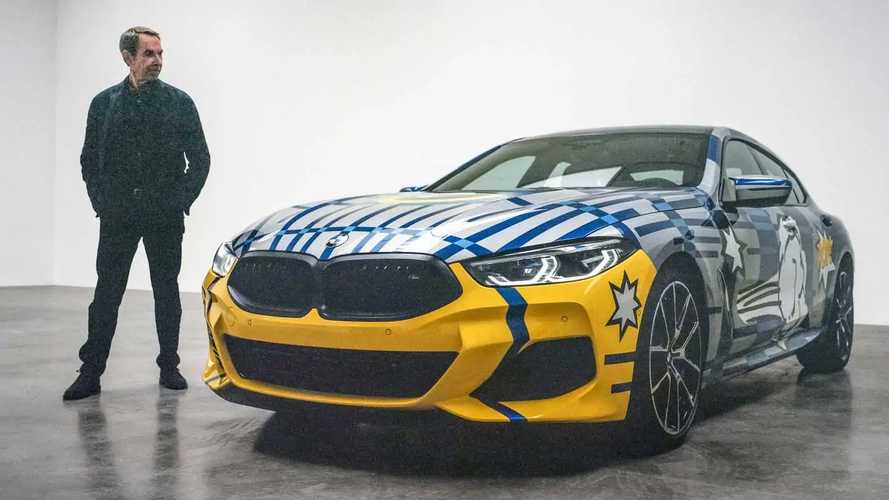 The hood has a complicated pattern of intersecting lines in shades of blue and gray. A stylized BMW logo is in the center.

Along the sides, there are more of those comic-book-art-inspired touches, including “POP!” on the rear doors. The depiction of a cloud emerges from the outlet behind the front wheel. Horizontal blue lines create a sensation of speed along the vehicle’s flanks.

The surprise at the back is the image of a cartoon-like explosion on the trunk and rear bumper.

The interior is similarly vibrant with a mix of bright red and blue upholstery on the seats. The lower part of the dashboard and floor mats are burgundy. The door panels and carpets are light brown. The cupholder lid plaque identifies the special edition and Koons’ signature.

BMW says that building each one of these cars requires 11 stages and several hundred hours of work. Specialized teams at the automaker will build two of them per week.

If you want one of The 8 X Jeff Koons vehicles for your garage or art collection, BMW is taking pre-orders for them now in the US. The automaker will also take the machine on a global tour starting with a display at Rockefeller Plaza in New York City from April 1 through 4. Folks will also be able to see it at the 16th Istanbul Contemporary, Paris Photo, Goodwood Festival of Speed, Art Dubai, West Bund Art & Design Fair Shanghai, and Art Basel Hong Kong.

Koons previously collaborated with BMW by creating a BMW M3 GT2 art car in 2010. It featured vibrant streaks of colors over a black background. The machine competed in the 24 Hours of Le Mans that year.