John Cadogan makes very good points and others that deserve to be corrected.

Some of our readers will hate the guts out of John Cadogan. Owner of the Auto Expert YouTube channel in Australia, he bought a Hyundai Kona Electric and has been driving it for 9,000 km already. Among the 12 things he claims to have learned with it, not only the negative ones will drive many mad. Regardless, all of them are worth listening to despite his not very subtle way to phrase them – sometimes NSFW, so be careful where you watch it.

When it comes to the positive things, Cadogan mentions the performance, how EVs help clean the air in the cities where they are used, that range and charging are not an issue, that he doesn’t miss refueling at all, and how electric cars can bring energy security to Australia. These are five things that make driving the Hyundai Kona worthwhile. 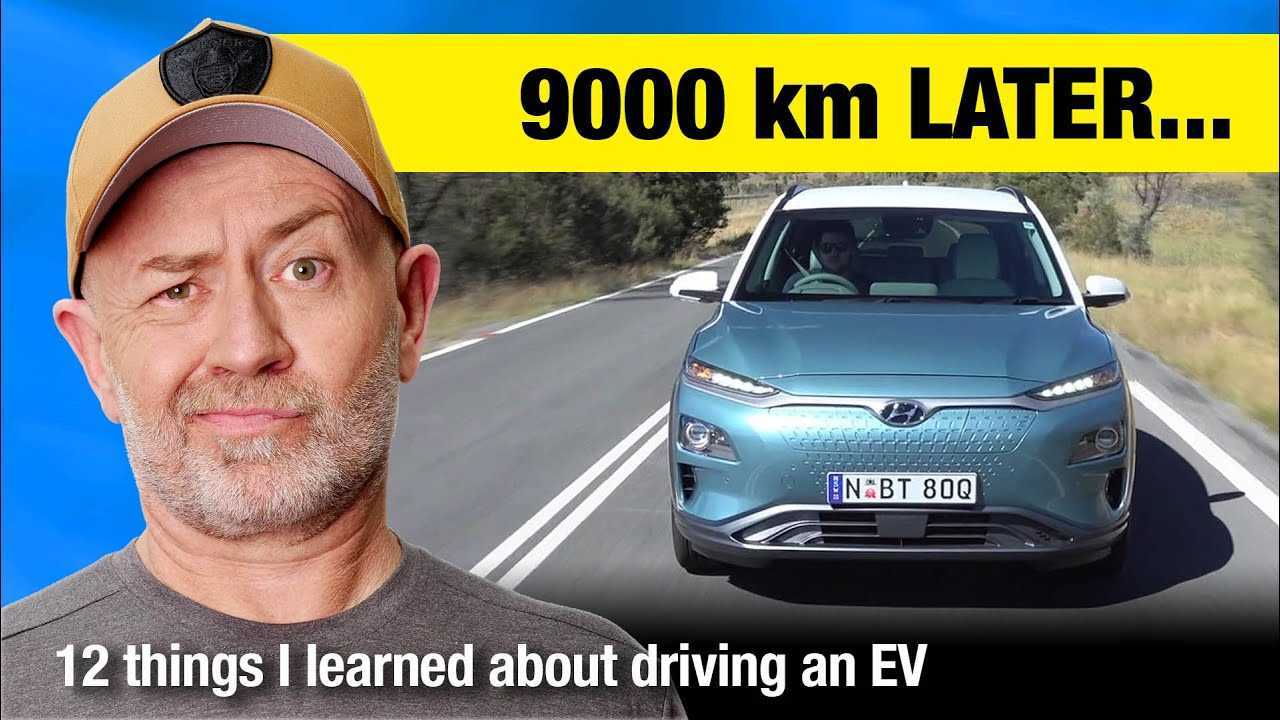 As this Australian auto expert argues, relying on electricity to power part of the country’s fleet makes it less dependent on oil. Skipping the gas station and being able to charge your car at home – just like you do with your laptop or smartphone – is convenience at its best, with the plus that electric cars are cheaper to run.

They are also much more agile in the city and do not emit pollutants such as nitrogen oxides precisely where there are more vehicles and people around – big cities. That keeps healthcare costs down, especially when it comes to respiratory diseases. Finally, a fully recharged Kona – with its bigger battery pack – can get you to places 400 km (249 miles) away with no concerns.

Among the neutral things he learned, his recommendation to choose your EV brand wisely will certainly displease a lot of people devoted to some brands. In his opinion, you should choose a company with a strong reputation for customer support so that you are not left in the lurch. 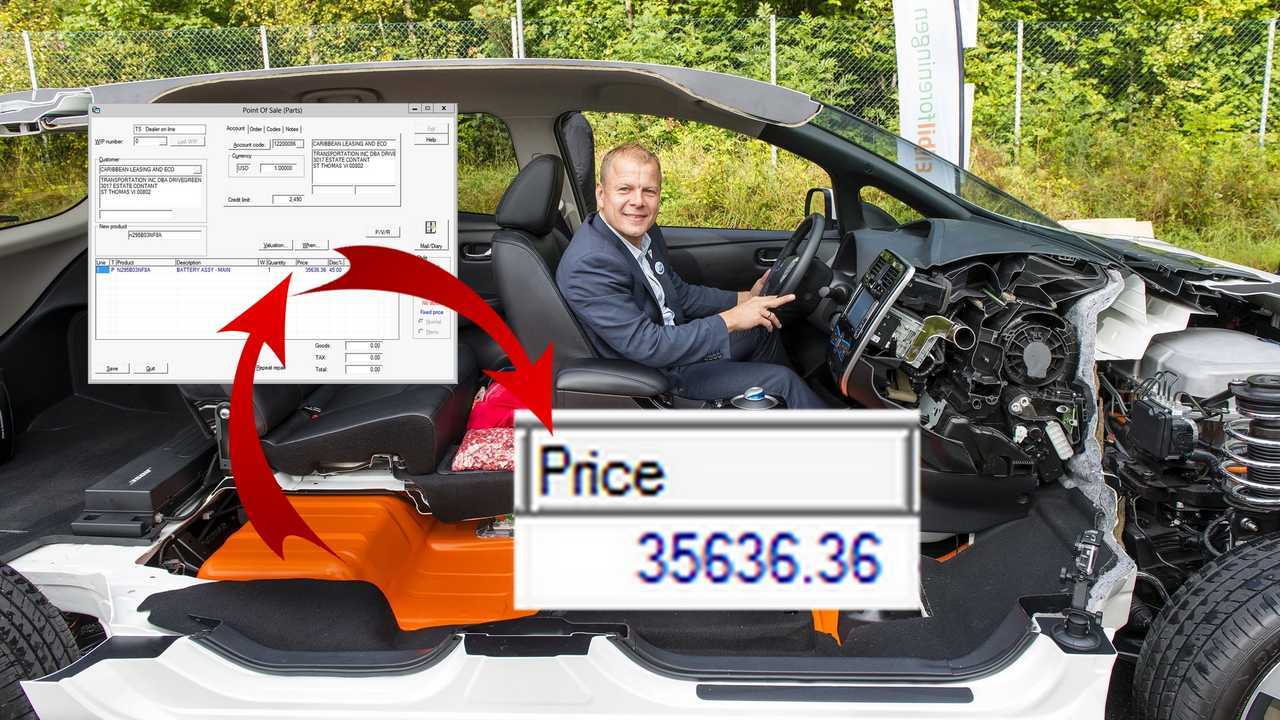 Apart from mentioning Tesla as a bad example, he also speaks about Nissan’s fiascos on that matter. Mercedes-Benz would be the “gag order” champion, and Volkswagen would be the company that puts profits above human health, a clear reference to Dieselgate. This is why he chose a Hyundai.

One of the first negatives he mentions is eco tires. For him, they are rubbish for people that like to drive, despite the savings. He changed the tires in his Kona and was pretty happy about how it drove after that.

The other negative aspects start with the speech that you are saving the planet with an EV. For Cadogan, that is just nonsense. He mentions automakers don’t care what you buy as long as you buy a car and that this would be why electric cars do not have the power to save the planet. He’s got a great point here, although he did not develop it enough. 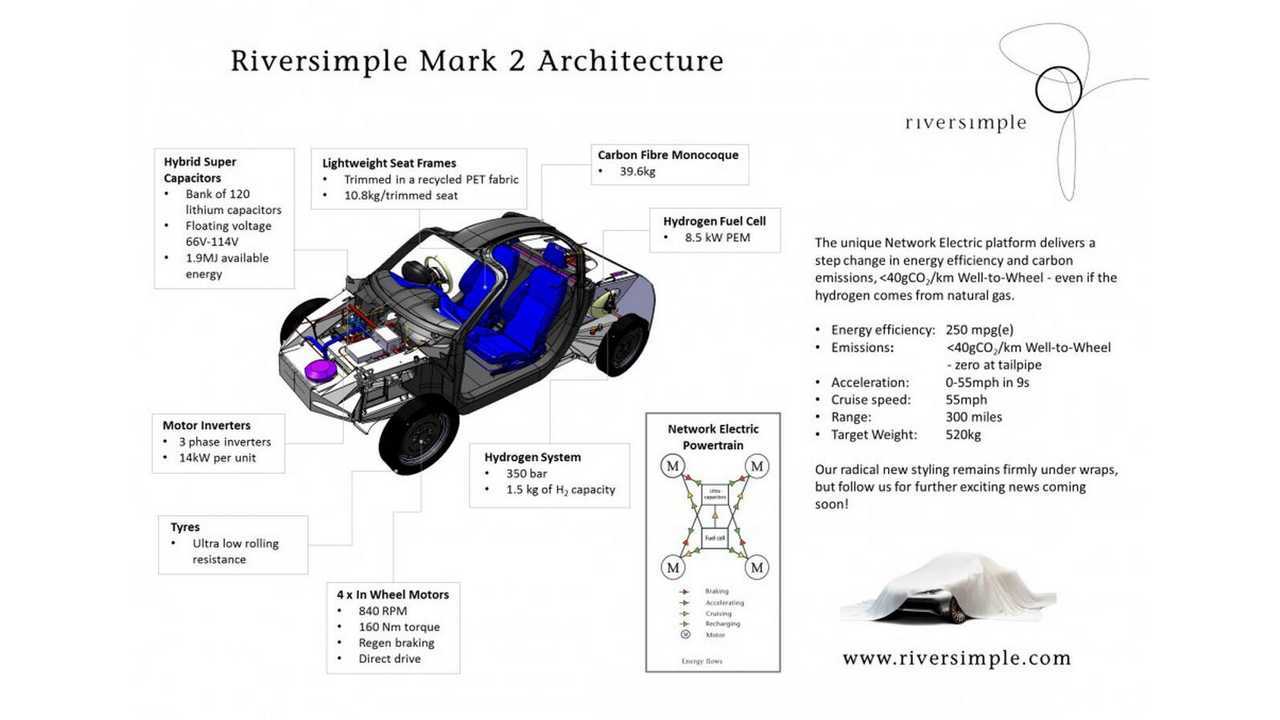 As Hugo Spowers mentioned when he explained Riversimple to me, the way our economy and industries are organized is not sustainable. They are based on consuming more natural resources and presenting increasing production numbers year after year. When they don’t, their shares’ value drops, and they may even go bankrupt.

Even if you are not aware of that, your wishes for any company to sell millions of cars necessarily mean you want more mines extracting minerals from the ground, such as the ones that cause the Brumadinho dam disaster in search of iron ore. It also implies World Overshoot Day will keep happening sooner every year. This is what Cadogan meant, and he is right about that.

To fix this, Spowers created Riversimple, which changes the way we deal with cars. You can learn more about the concept with the article I wrote about the idea. Summing up, the company’s profits come from the circular economy: not from higher production numbers, but rather from improvements it does to cars it will never sell. Curious? Read the article, and you’ll get it. 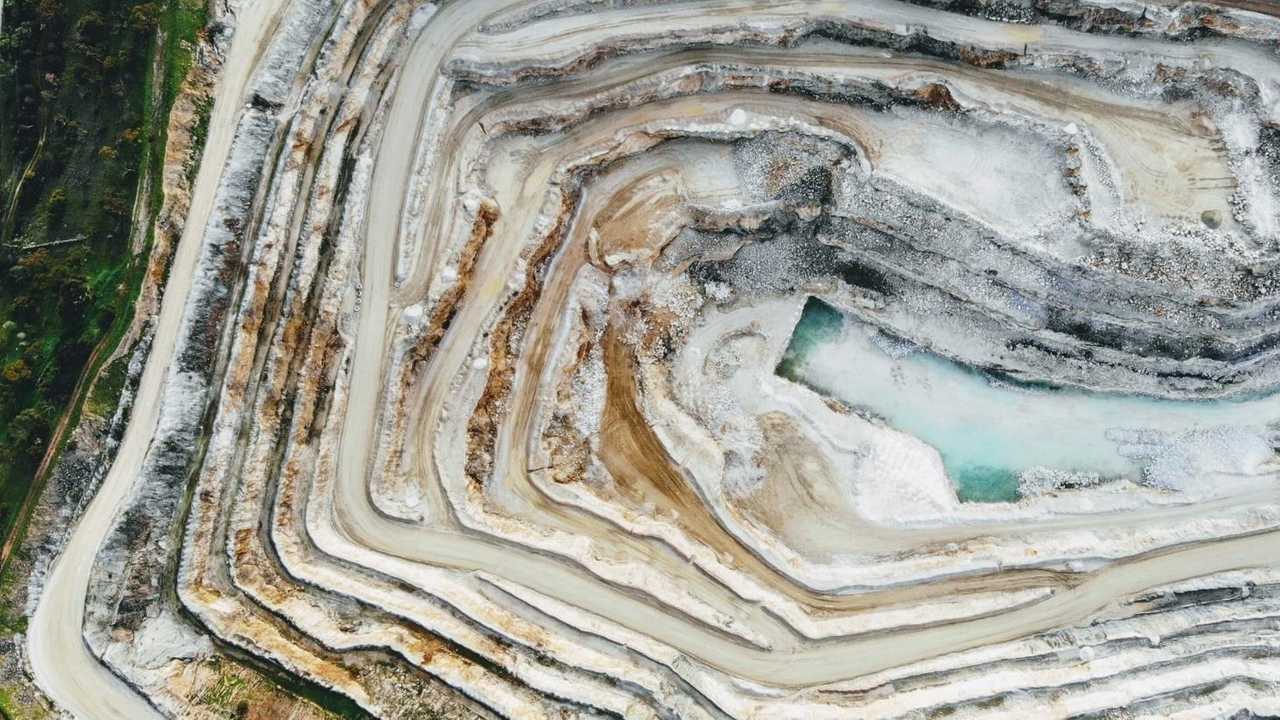 Another issue Cadogan sees with electric cars relates to cobalt. If you already dismissed his argument saying Tesla’s batteries avoid cobalt, give it a thought if you like electric cars or a single company that happens to sell them: perhaps the other ones use batteries with a lot of cobalt, and they are also EVs. Besides, that is not even Cadogan’s point.

He uses cobalt as an example that mining has to be more responsible not only from an environmental point of view but also from a human rights perspective. Whatever minerals are in your car’s battery packs, you have to be sure about how they were obtained.

Coincidence or not, Amnesty International released on February 4 an appeal to have mining of all sorts – including lithium – respect a set of principles that ensure it cares for human rights and does not cause environmental harm. Cadogan is right once again to care about that. 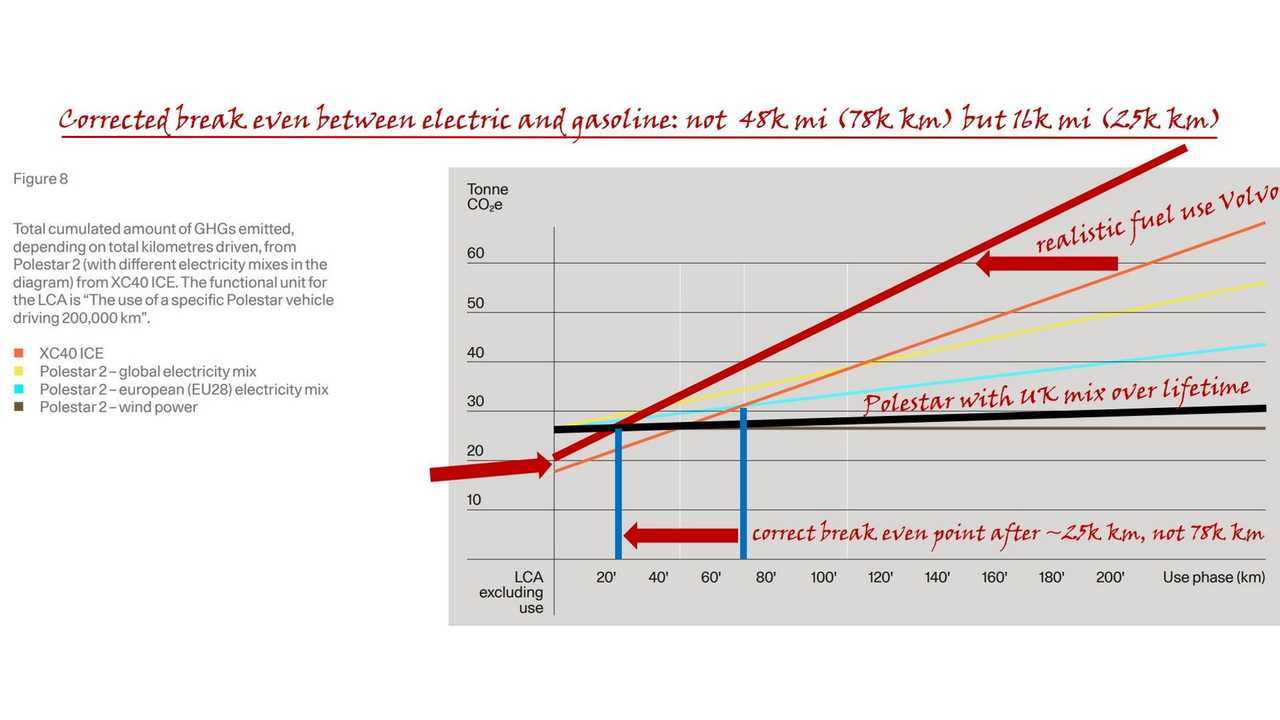 Unfortunately, he misses the point when he mentions that EVs are not even as clean as they claim to be. Cadogan specifically mentions that EVs in Germany have to run 100,000 km to break even with combustion-engined cars in terms of carbon emissions.

That’s a clear reference to a study released by legacy companies called “Decarbonising Road Transport: There Is No Silver Bullet.” It stated a Polestar 2 would have to run 78,000 km (50,000 miles) to achieve the same carbon emissions level of a combustion-engined car.

Auke Hoekstra, an electric car researcher at TU Eindhoven, debunked that in an epic way. Although electric cars really have a higher carbon emission in manufacturing due to the battery packs, that difference requires only 25,000 km (16,000 miles) to get even with what ICE cars emit while being produced and running. And that can be even less depending on the comparison you decide to make, with different vehicles. 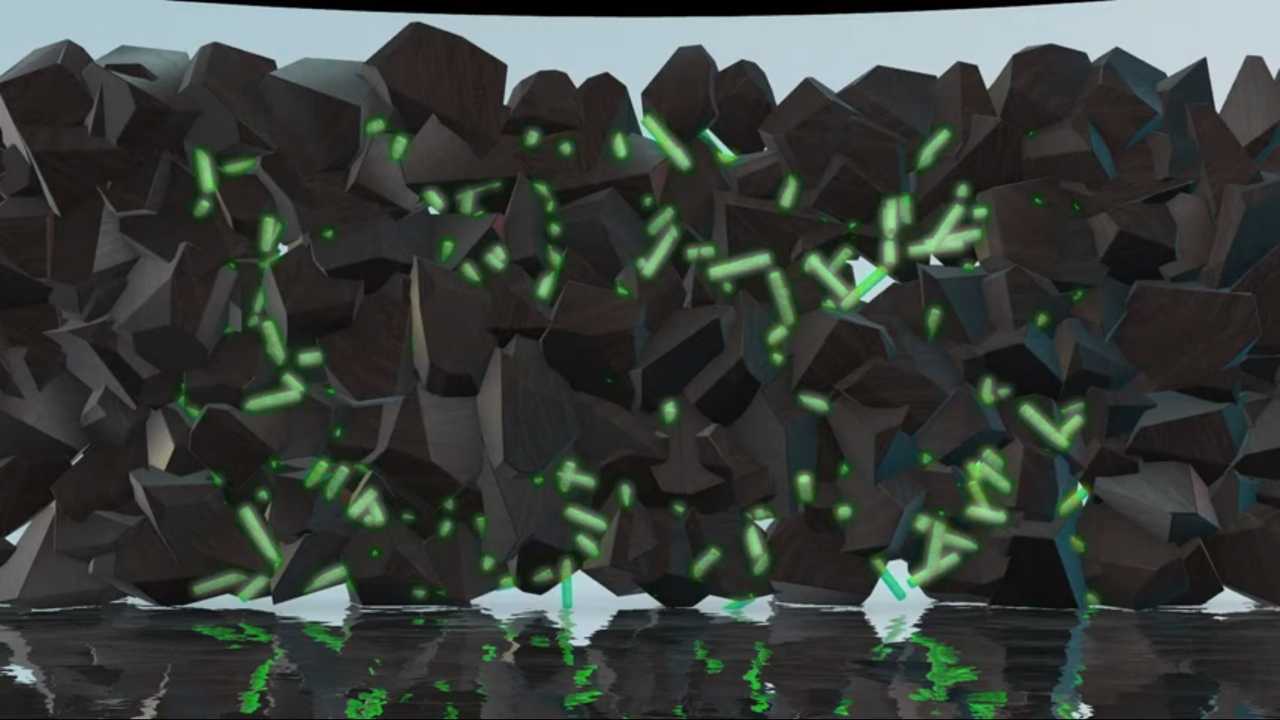 Cadogan makes another mistake when he says that better batteries can only have incremental improvements. He claims that, if they were possible, they would have been already disclosed after decades of research. This is not what we see.

Multiple companies are working on battery technology. Recently, Nanoramic told InsideEVs about a composite electrode that could improve regular batteries’ energy density by more than 30 percent. Solid-state batteries will get to the market by 2025, and there is plenty more news on our way with solutions to reduce costs, increase range, and cut safety risks.

Why would that be the case? Money, as usual. With legacy automakers realizing that electric cars are the future for personal mobility, they are putting loads of cash into research for the next big thing in battery tech. Volkswagen and Toyota are competing to see which will be the first to sell a car with solid-state batteries, for example. 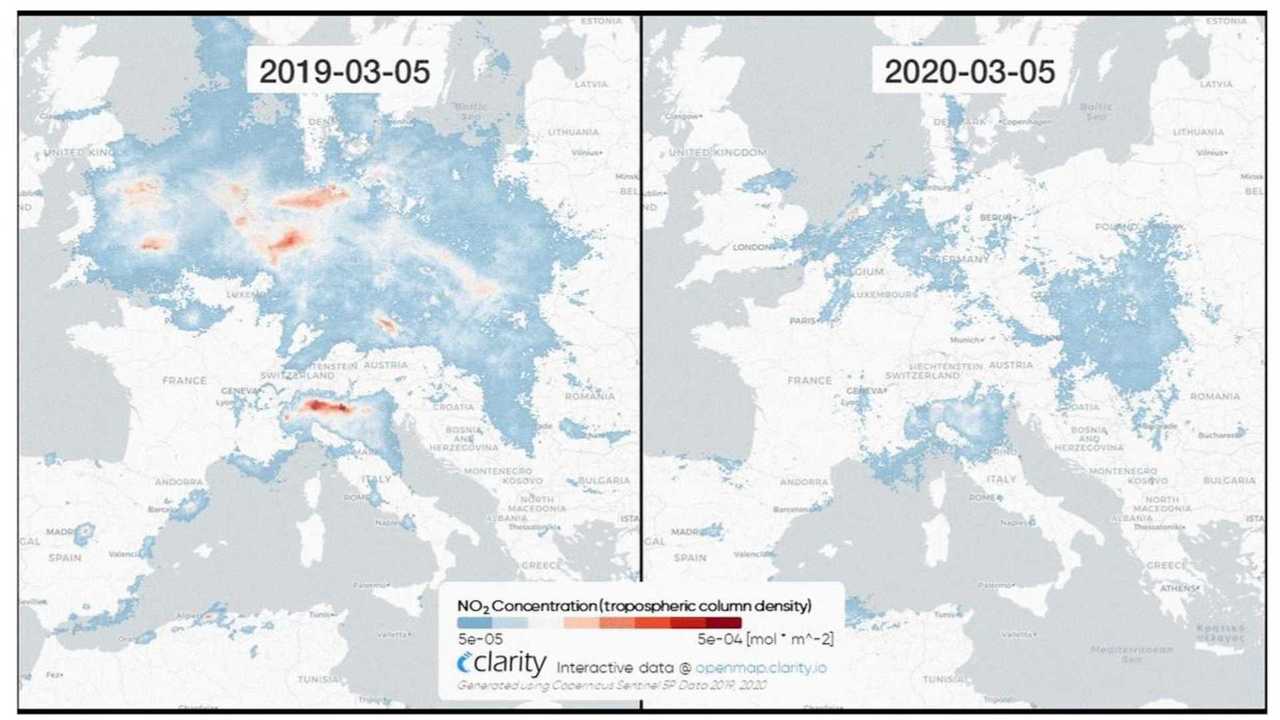 As the vaccines for COVID-19 prove, when there is enough money for research, things move much faster than they did before. That’s the case for batteries, and we will see better ones in a matter of months, not years or decades.

That leads us to the two last things Cadogan said he learned from his Kona Electric experience: that combustion-engined vehicles will not die due to electric cars and that the future will probably have both options for people to choose what suits them best.

About those lessons, we can say they are wrong because of a simple fact: oil is a finite resource, which makes ICE as finite as what they need to work. We could have fuels made from renewable sources – such as ethanol in Brazil – but why would we invest in that if electric vehicles can be so much more efficient?

We have already written about that and will do so whenever we can: the best engines around have a thermal efficiency of 40 percent. That implies you burn $60 off every $100 you spend in fuel. If they can be more efficient, they will cost a lot more. The worst electric engines convert 90 percent of electricity into movement. This is what will kill combustion engines, nothing else.

Cadogan argues that electric vehicles cannot tow or carry heavy loads around because there are no electric trucks or pickup trucks. Yet, that changes in 2021, when Rivian will start delivering the R1T and Tesla plans to produce the Cybertruck and the Semi. Legacy automakers, such as Hyundai. Mercedes-Benz and Toyota are already selling trucks with fuel cells.

That said, the future is electric. By definition, it is yet to arrive, but there is no doubt that it is on the verge of doing so. We just have to make sure this future is better than our past or present by making the right choices. Cadogan already learned that, and we are glad that he took the time to share these lessons in a video. Lucid and factual discussions are a blessing in a polarized and irrational world, even if there is a thing or two to correct.

Hertz Obtains $1.65B in Debtor-In-Possession Financing