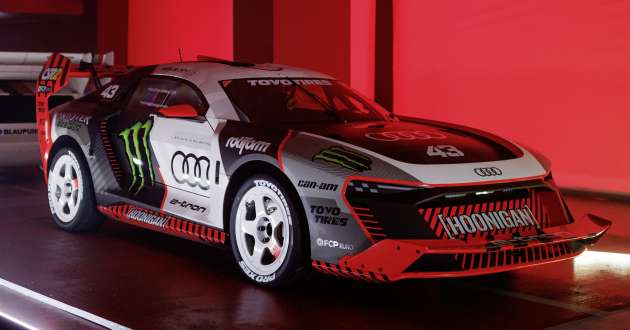 Ken Block of Gymkhana video series fame has emerged once more, this time in partnership with Audi following the Amercian rally and rallycross driver’s partnership of 11 years with Ford.

Here, the star car is the Audi S1 Hoonitron that has been developed by Audi Sport at its Neckarsulm facilities, thus arriving at a number of firsts – this is the first fully electric vehicle in the Gymkhana series, as well as the first and currently only car in the series to begin life as an OEM-built car.

Audi states that the S1 Hoonitron packs two electric drive motors for all-wheel-drive producing “power galore”, based on a carbon-fibre chassis and fully complies with FIA safety standards. Its exterior body shell design was crafted by Audi Design, with cues that tip the hat to Audi’s own icons such as the Audi Sport quattro S1 Pikes Peak.

“With the S1 Hoonitron, we broke entirely new ground at Audi. Developing a fully electric prototype for the unique requirements of our partner Ken Block was a big and exciting challenge to which the whole team rose with flying colors. It is great to see how ‘Vorsprung durch Technik’ is presented in an all-new environment,” said Audi head of technical development Oliver Hoffmann.

In addition to the signature theatrics of car control courtesy of Block behind the wheel as well as the views of the Las Vegas landscape, the Audi S1 Hoonitron is joined by luminaries of Audi’s motorsport heritage fleet including the production-based 1989 Audi 90 IMSA GTO, 1987 Audi Sport quattro S1 Pikes Peak and 1984 Audi quattro Group B A2.

Also part of Audi’s fleet of motorsport star cars are its prototype endurance racers, represented by the R8 LMP and R18 e-tron quattro. Tagging along with the fleet is Le Mans legend Tom Kristensen, nine-time winner of the 24-hour race at the Circuit de la Sarthe in France.