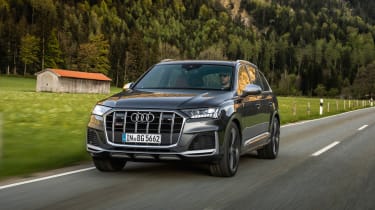 Audi has revised the SQ7 and SQ8 performance SUVs with a new 4.0-litre turbocharged V8 petrol engine. The new engine replaces the brand’s existing V8 diesel models and will be available to order from autumn this year, with prices starting from around £78,000 for the SQ7 and £83,000 for the SQ8.

The 4.0-litre TFSI unit is the same engine that’s found under the bonnet of the Bentley Continental GT V8 and Lamborghini Urus, but with less power. It develops 500bhp and 770Nm of torque – although both feature a similar eight-speed automatic gearbox and four-wheel-drive system.

• The fastest SUVs on sale now

Audi says the new powertrain gives both SUVs a 0–62mph time of 4.1 seconds and an electronically limited top speed of 155mph. With the new engine’s mid-range torque, Audi also says that both cars will accelerate from 50–75mph in 3.8 seconds.

The new 4.0-litre petrol engine features cylinder deactivation technology. The system can temporarily shut down four of the engine’s eight cylinders, which Audi claims will improve fuel economy. Audi claims both the SQ7 and SQ8 can return 23.3–23.5mpg, according to WLTP rules.

The updated SQ7 and SQ8 models come with a selection of chassis updates too, including an uprated adaptive air suspension system, larger brakes, fatter tyres and active all-wheel steering. 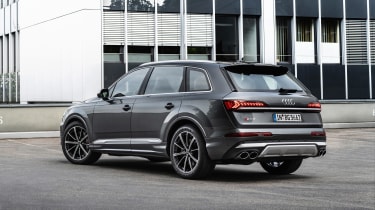 At low speeds, the all-wheel steering system can turn the rear wheels by as much as five degrees in the opposite direction to the front wheels to improve the car’s turning circle. At higher speeds, all four wheels turn in the same direction to improve stability.

What do you make of the new V8-powered Audi SQ7 and SQ8? Let us know in the comments section below…

Synthetic vs Conventional Oil: Everything You Want and Need to Know