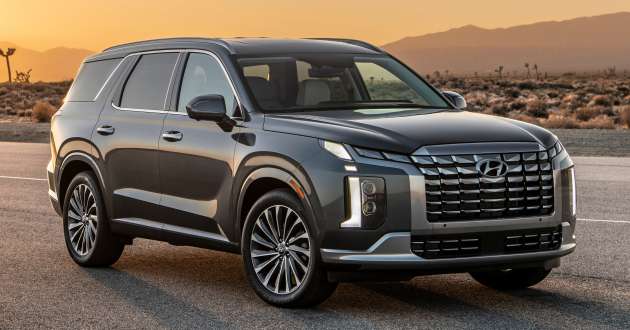 The 2023 Hyundai Palisade facelift has made its debut at this year’s New York International Auto Show, bringing with it a refreshed design as well as a revised kit list. The big, three-row SUV first made its debut back in November 2018 and was launched in pre-facelift form in Malaysia just last December.

The most notable changes are seen at the front, starting with a wider cascading grille with prominent parametric shield elements that extend towards the bonnet shut line. This creates a much bolder look and is complemented by a wider lower intake featuring a more encompassing silver surround.

The Palisade’s vertically-connected LED composite lights have also been redesigned to now feature thicker bars that make up the daytime running lights, while the main headlamps (identified by their dual elements) are tucked inwards of the DRLs and closer to the grille than before.

At the rear, we find familiar-looking taillights and a lightly tweaked bumper, with the latter now sporting a large skid plate in the lower apron. This is accompanied by square exhaust finishers as well as reflectors and reverse lights that are placed in a single file rather than being at the corners of the bumper. New 20-inch multi-spoke alloy wheels are also available, depending on options or trim level. 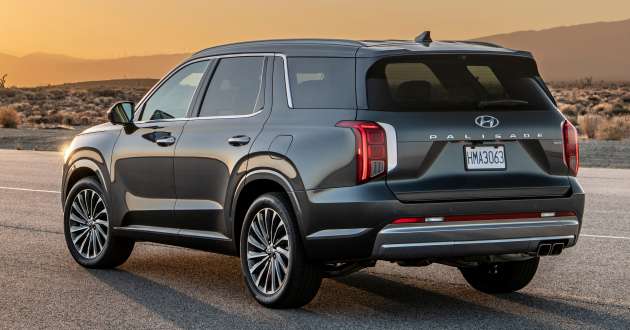 As for the interior, Hyundai decided to give the Palisade slim air vents that span nearly the entire width of the dashboard to “add a sense of spaciousness” as well as a new steering wheel. A new interface design is also applied to the 12.3-inch digital instrument cluster and central touchscreen infotainment system, with the latter now available at a size of 12 inches.

A more subtle revision is the control panel beneath the centre air vents, which now has black buttons to match those on the centre console – these were previously finished in silver. Hyundai also added an Ergo Motion driver’s seat that it says provides better comfort and helps reduce fatigue during long drives, while those in the third row can now enjoy a heating function (this is apparently a first for Hyundai).

Meanwhile, the second row of seats now offers wing-out headrests and seat ventilation, along with an angle-adjustable armrest for the eight-passenger version (also another first for Hyundai). The Korean carmaker also swapped out the USB-A ports for USB-C that can offer quicker charging up to three amps, and the wireless charger now pushes out 15 watts instead of five watts.

In terms of equipment enhancements, the Palisade becomes the first Hyundai in the United States to be available with a digital rearview mirror and Wi-Fi hotspot capability. The SUV also supports the latest Digital Key 2, allowing owners with compatible iPhone, Apple Watch or Samsung Galaxy devices to unlock and start their vehicle without needing a key fob. 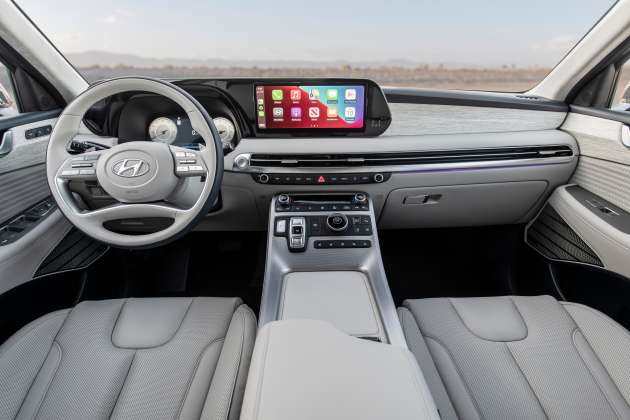 The brand’s Bluelink telematics system is present too, and not only allows owners to check on their vehicle status, but also receive alerts should the Rear Occupant Alert system detects the movements of children and pets left behind in the rear seats.

What hasn’t changed on the Palisade in the US is the engine, which is still a 3.8 litre Atkinson-cycle petrol V6 engine. Mated to an eight-speed automatic transmission with a choice of two- or HTRAC all-wheel drive, the mill produces 291 horsepower at 6,000 rpm and 355 Nm of torque at 5,000 rpm.