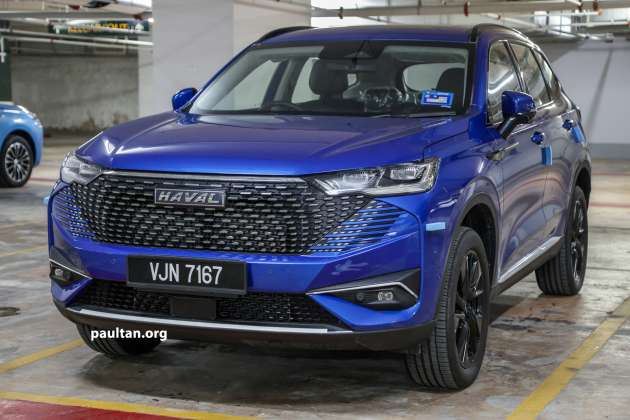 The Haval H6 has been spotted in Malaysia again, this time without any camouflage unlike previous sightings. The H6 is one of a few models earmarked to be launched here by Great Wall Motors Malaysia, with others mentioned being the Haval Jolion and Ora Good Cat.

Judging by the ‘HEV’ badges, the red and blue examples you see here feature a hybrid powertrain. The H6 Hybrid is nothing new and was first revealed in Thailand last March, with two variants offered to customers there, according to Headlightmag. The base option is the HEV Pro priced at 1.149 million baht (RM142,286), while the range-topping HEV Ultra goes for 1.249 million baht (RM154,670).

The H6 Hybrid’s powertrain is comprised of a seven-speed dual-clutch transmission mated to a 1.5 litre turbocharged four-cylinder petrol engine that serves up 167 PS and 285 Nm of torque. The mill is augmented by an electric motor rated at 177 PS (130 kW) to produce a total system output of 243 PS and 530 Nm.

The cars in these photos appear to share the same equipment, including 19-inch wheels, a 10.25-inch digital instrument cluster, a 12.3-inch touchscreen infotainment system, combination leather/fabric upholstery and advance driver assistance systems (given the presence of the front radar sensor).

It should be noted that the front face you see here is shared with the Plug-in Hybrid variant, which sports a more prominent grille with chromed dashed lines. The Hybrid and regular internal combustion engine versions of the H6 are supposed to get a diamond pattern grille insert instead.

However, Chinese media outlets report that a special edition of the H6 was revealed in China last year – dubbed the Supreme Plus – that came with the Plug-in Hybrid face but was offered with hybrid and non-hybrid powertrains. Perhaps that’s what we’re looking at here. When it goes on sale here, the H6 will compete against other C-segment SUVs like the Honda CR-V, Mazda CX-5 and Proton X70.