Ford was eager to tease the second-generation Ranger Raptor on the very same day the regular midsize truck was unveiled. That was back in November 2021, and now, the high-performance pickup shows more skin to ease the wait prior to a February 22 world premiere. As with the initial preview, the Blue Oval gives us the opportunity to hear the soundtrack delivered by what is certainly a gasoline engine.

As you may recall, the previous Ranger Raptor was offered with a four-cylinder, twin-turbo 2.0-liter diesel engine making 210 horsepower and 369 pound-feet (500 Newton-meters) of torque. Its replacement is widely believed to switch to an EcoBoost V6, presumably the twin-turbo 3.0-liter from the Bronco Raptor with over 400 hp on tap. The torque figure remains a mystery, but we do know the engine pumps out 415 lb-ft (563 Nm) in the Explorer ST. 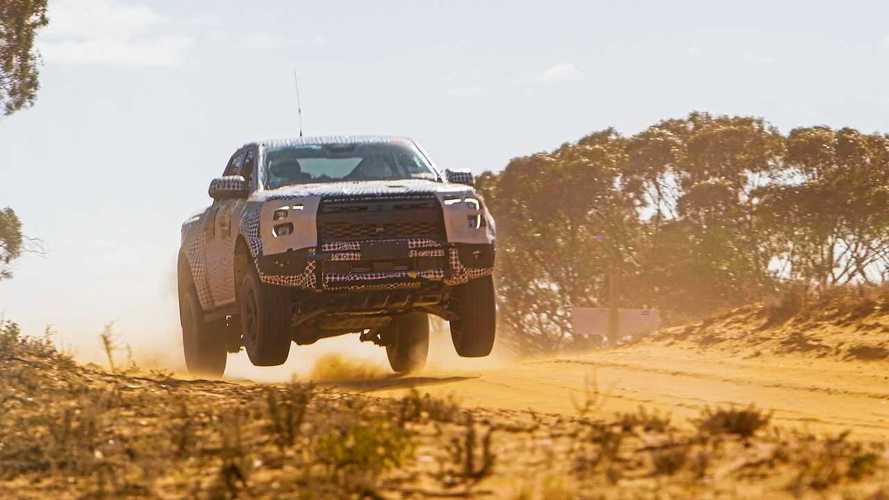 The fresh video shows the flagship Ranger version playing in the sand and catching some serious air while putting its upgraded suspension to work. As it’s usually the case with Raptor models, expect more of everything compared to the lesser trim levels. Fender flares to host the chunky off-road tires are on the menu, and so is the imposing front grille with huge “FORD” lettering.

The prototype being pushed hard on dirt has a full roll cage and is missing the headliner, but that’s only during the testing phase. We can say the same thing about the body-hugging bucket seat as that won’t make it to production either. Also noticeable are the shift paddles behind the steering wheel, likely belonging to a 10-speed automatic transmission sending power to a full-time four-wheel-drive system.

Unlike its predecessor, the 2023 Ford Ranger Raptor is expected to arrive in the United States. That seems plausible since a left-hand-drive prototype was spied in North America earlier this week. At the beginning of the month, we reported the speedy truck could carry a starting price of $52,500 in the US.

Further down the line, there might even be a Ranger Raptor R to join the bigger F-150 Raptor R coming later this year.

Ferrari Roma Doesn't Need A Tuning Kit, But DMC Made One Anyway