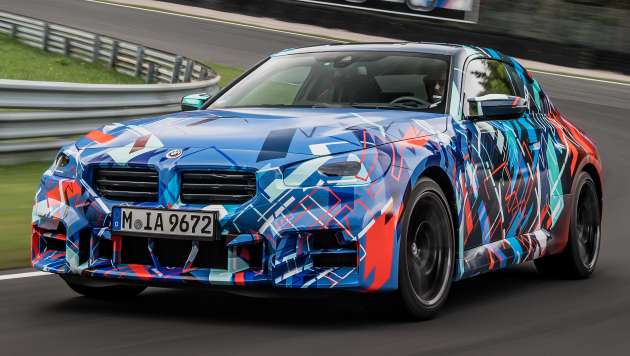 So far this year, BMW has released a number of limited edition models and the M4 CSL to commemorate the 50th anniversary of BMW M. The company will round off the celebrations with the new G87 M2, which will be revealed in October – but not before Munich teases the hell out of the high-performance small coupé.

These images show a car that is very different from its predecessor, even with all the camouflage applied. The new M2 will obviously be based on the G42 2 Series, sharing that car’s angular design language and upright glasshouse, but builds on the already extroverted look with even more blistered fenders and an even taller power dome on the bonnet.

Protruding squared-off elements dominate the design of the M2, including the large double kidney grille (they are at the very least in their normal size and come with horizontal rather than vertical slats) and the air intakes that flank the rectangular centre inlet. While the 2 Series’ kinked headlights remain, there are separate panels that help fill in the shape and maintain the car’s blocky aesthetic. 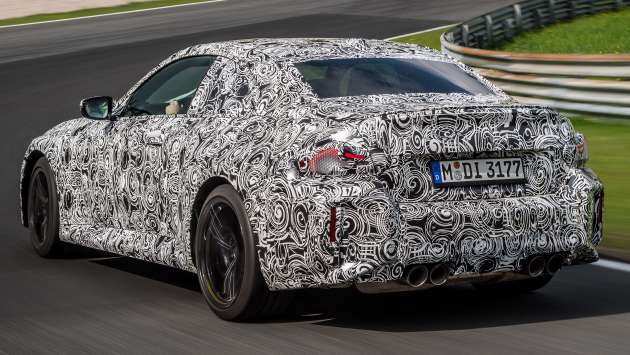 Along the side, you’ll be able to spot the trademark dual-arm door mirrors, although the other telltale M cue, the front fender gills, are either well disguised or have been eliminated altogether. The rear end gets vertical reflectors and a diffuser that flares dramatically outward, with the typical quad tailpipes nestled within. A conventional boot lid lip spoiler round off the visual enhancements.

While the interior has also been heavily camouflaged, the key changes are easy to spot. These include the M steering wheel with M1 and M2 buttons, alloy pedals and the M3 and M4‘s optional (and heavily bolstered) M carbon bucket seats. The BMW Curved Display, which features a 12.3-inch instrument display and a 14.9-inch infotainment touchscreen, is present here, having already been added to the greater 2 Series lineup.

Purists will also be pleased to know that the M2 will come with a six-speed manual gearbox option to supplant the eight-speed automatic, the latter replacing the outgoing car’s seven-speed dual-clutch transmission. No matter which version you go for, you’ll get the M Mode and Setup buttons that were first seen in the M8, along with a button for the active exhaust. 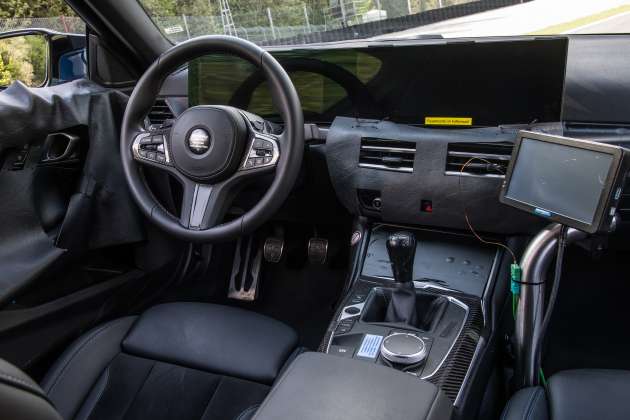 Like the limited-run CS, the new M2 will come with adaptive dampers as part of a suspension and bracing package reportedly carried over almost wholesale from the M4. The steering, stability control and rear diff have been recalibrated to take into account the 110 mm shorter wheelbase, while the coil springs are stiffer at the front and softer at the rear for sharper turn-in and a more agile and playful attitude. To compensate for the lack of rear roll stiffness, the M2 will run the uprated dampers from the upcoming M3 Touring.

The M2 is able to utilise the components from its larger siblings because it too will be built on the same Cluster Architecture (CLAR) platform. This supposedly brings a weight penalty to the mix, although engineers have tried to work around it using new technologies. There’s some lightweighting involved, too, including a carbon roof – although it’s optional rather than standard-fit in this case.