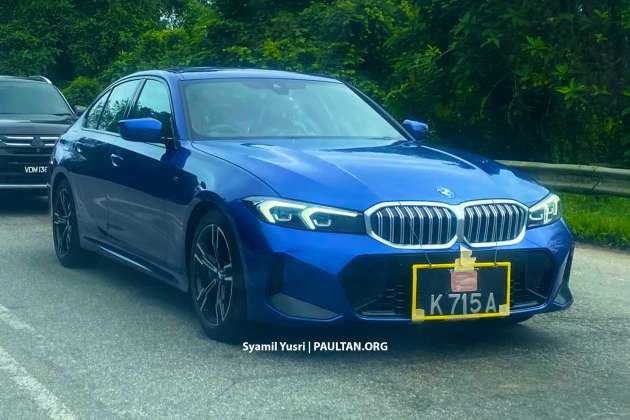 It looks like BMW Malaysia is gearing up to launch the new G20 3 Series facelift (Life Cycle Impulse or LCI if you prefer BMW speak), as a blue example of the revised compact executive sedan (we detailed the changes here) was recently spotted by paultan.org reader Syamil Yusri in Kulim, Kedah.

Kulim is location of the Inokom plant where locally-assembled (CKD) BMWs are produced, and this sighting suggests we’ll get the facelifted 3 Series in CKD form at launch. This would be different from the pre-facelift model, which initially arrived as a fully-imported (CBU) car before a CKD version was introduced several months later for a more affordable price.

The exact variant and corresponding engine for this example are unknown for now, but it is dressed in M Sport kit and rides on what appears to be 18-inch double-spoke Style 848 M bicolour alloy wheels. This also sees the fitment of sporty front bumper featuring a large lower intake flanked by vertical air curtains.

The exterior package complements the nip and tuck that includes a slightly reshaped kidney grille in an octagonal design and with double-bar slats. The headlamps are also slimmer and when compared to the pre-facelift model, they now come with an inverted L-shaped signature for the daytime running lights and no longer have a “claw-like” profile of the pre-facelift model.

We don’t have a shot of this 3er’s rear, but the M Sport kit also sees a new bumper with a large, diffuser-like element linked to vertical reflectors at the sides. What remains the same are the taillights that maintain their inverted L-shaped light signature.

Further changes that come with the facelift can be found inside the cabin, with the 3 Series LCI adopting the BMW Curved Display also seen in the i4. This is now standard across the range and features a 12.3-inch digital instrument cluster placed next to a 14.9-inch central touchscreen, both powered by BMW Operating System 8 that enables a wide range of connected services. 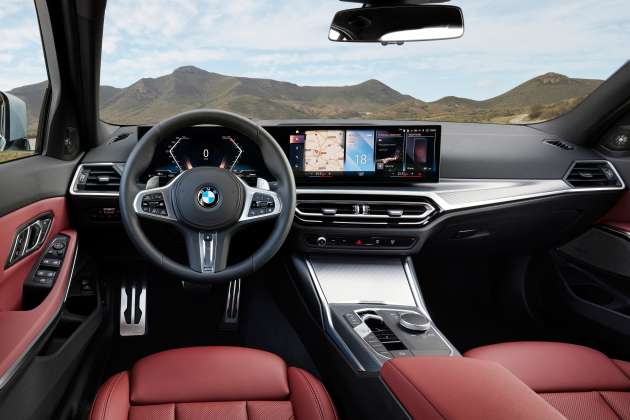 Adding these displays means the centre air vents have to be made slimmer and you there’s no longer a favourites row. The small display and controls for the climate system are also gone as they are now integrated into the larger central touchscreen. Elsewhere, the traditional gear lever has been replaced with a toggle switch on the centre console, which remains largely familiar, including the steering wheel.

There’s also a long-wheelbase version called the 330Li M Sport that retails for RM289,680. All five options we have now are CKD, which is also true of the more recent Runout Edition cars (320i M Sport and 330i M Sport) that were clear indicators that the facelifted model was on the way.