Stop me if you’ve heard this one: a technology company in Silicon Valley is poised to release the next big luxury mobile device. Only in this case, Company X is Lucid Motors and Device Y is the Air, a battery-electric sedan filled to the gills with gadgetry that promises long range and high performance.

It’s a tale we know all too well, and even the folks behind Lucid know it by heart. Indeed, most of them were part of it, hailing from disparate parts of the tech and automotive space such as Tesla, Audi, Apple, and more. This experience, combined with a healthy amount of competition to observe, has given Lucid plenty of data on both what to do and what not to do when it comes to making a mark in the luxury EV space. The end result is the Lucid Air, which now adds the Grand Touring and Grand Touring Performance models to its expanding range. These new versions of the Air present a car that shows restraint with some of its features while providing unbridled power and performance. 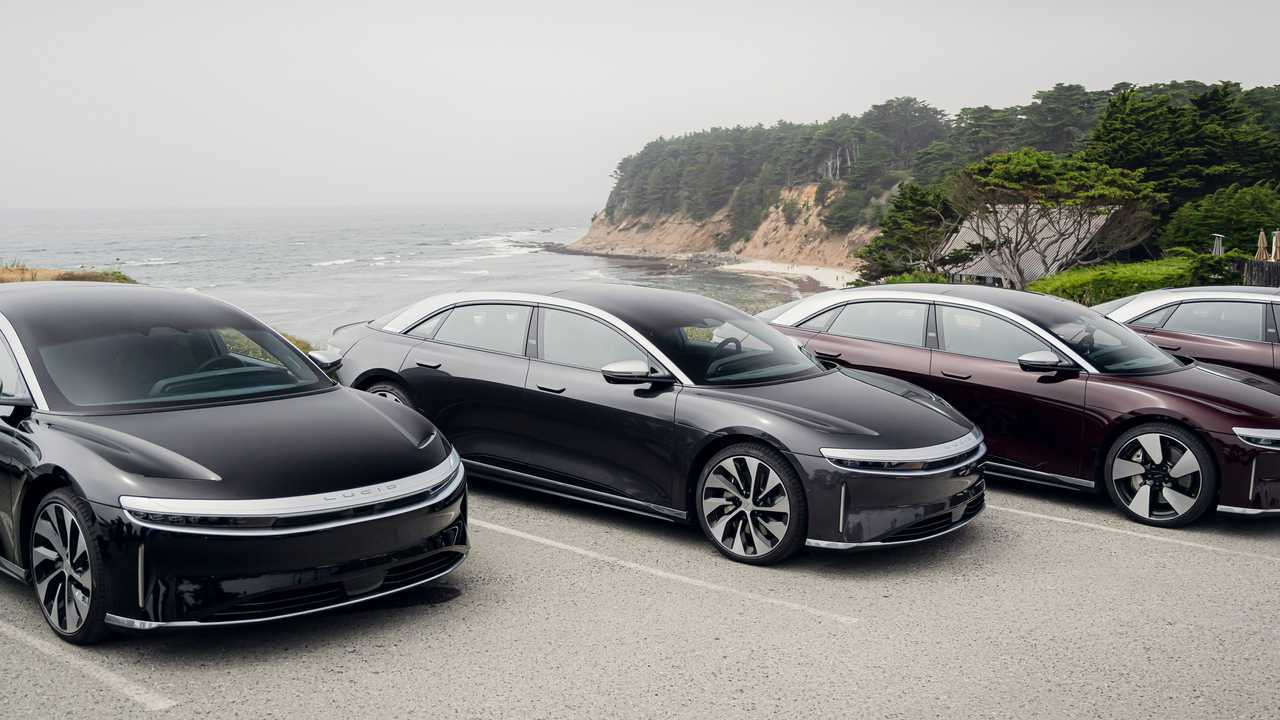 Two compact drive units sit on each axle, providing the Grand Touring and Grand Touring Performance 819 to 1,050 horsepower, respectively. 885 to 921 pound-feet of torque is sent to all four wheels giving the Lucid Air Grand Touring a claimed 0 to 60 time of either 3 seconds flat or a brain-scrambling 2.6 seconds in the GTP. Both top out at an electronically-limited 168 mph.

The secret sauce to all of this available power is a careful focus on efficiency. During my visit to Lucid HQ, Chief Engineer and Senior VP of Product Erich Bach gave us a walkthrough of existing EV motor tech, highlighting the different iterations of EV motors that have been developed through the years.

With each step, Bach elucidated how wasteful and time-consuming assembly gave way to more thoughtful and efficient construction that led to their smaller, lighter and more powerful drive units. In particular, the consistent threading of the hairpin-like copper wiring within the motor’s stator core in Lucid’s unit sits in elegant contrast to that of the bulky, randomly-wound assemblage in their example of a competitor’s unit. 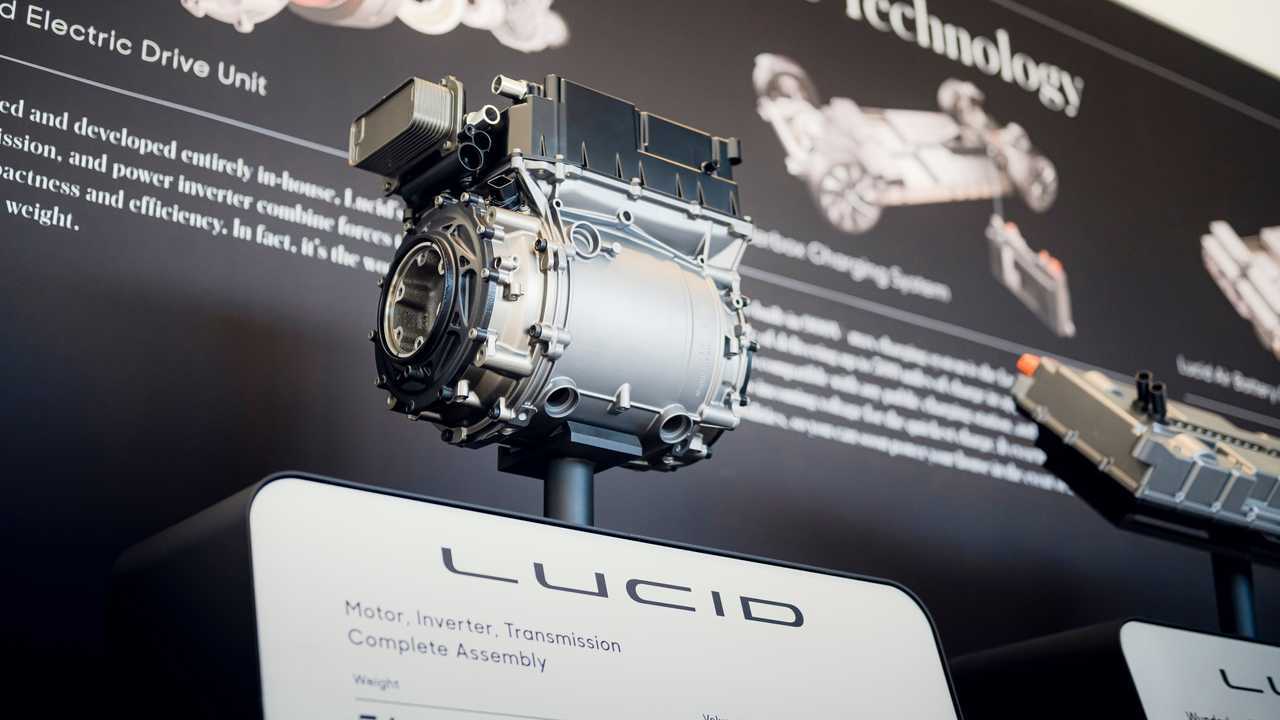 In a very Yoda-esque manner, this tidiness leads to a reduction in hardware, the reduction leads to better cooling, better cooling leads to optimized power delivery, and the ultimate result is a lighter, more compact power unit. The unit’s streamlined composition allowed engineers not only to keep the unit itself small, but allowed them to find other opportunities to innovate, such as installing an open differential directly in the center of the rotor assembly. What this means for the driver is the ample power output mentioned before, paired with a reduction in weight and ample room for hardware packaging.

With three different drive modes, the Lucid Air Grand Touring slips back and forth between its role as a luxury shuttle and performance sedan. “Smooth” appropriately dials back on the aggression, easing on the power with a press of the pedal while its stability control functions are at their most heightened, contrasting the floaty settings of the adaptive dampers. “Swift” splits the difference between that and “Sprint,” which opens up all of the power the Lucid can muster while stiffening the dampers and easing the stability control functions.

These modes also affect the always-on power regen, which can be adjusted through menu settings. Though it can’t be switched off, combining its low settings and Swift results in a more conventional ride, though the option of single-pedal “lazy fast driving” is an ever-present temptation. 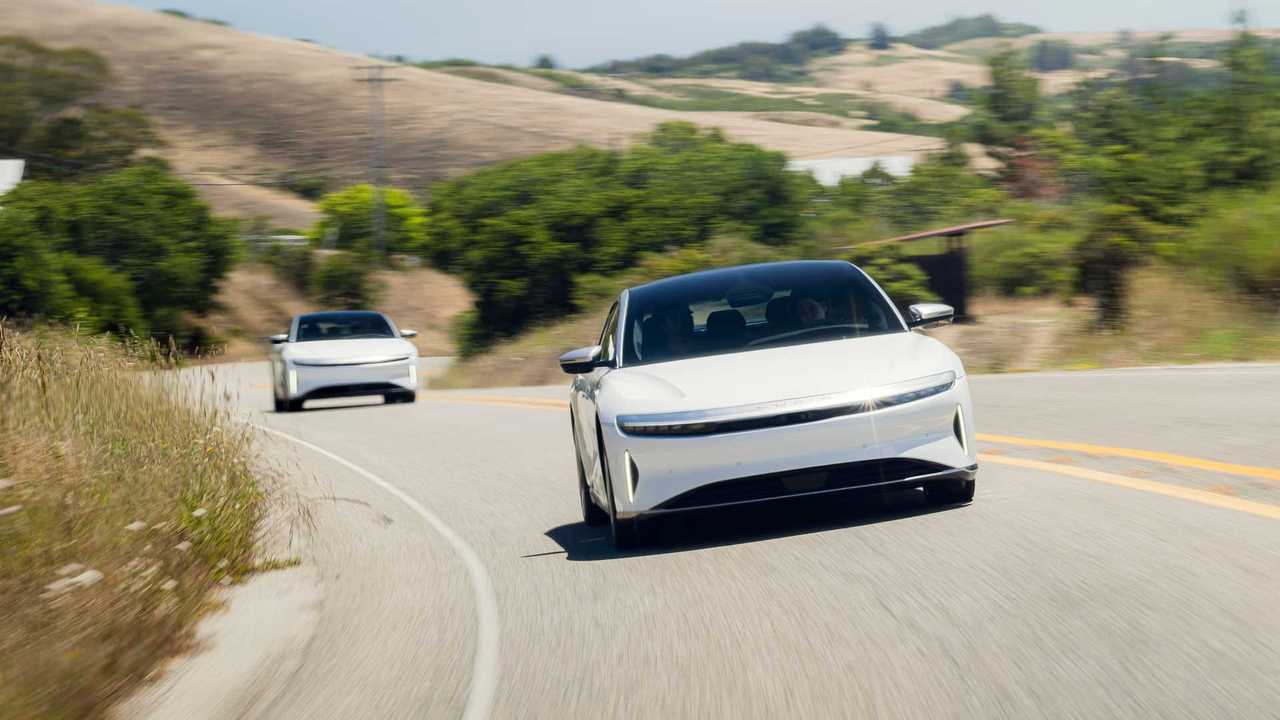 At full clip, the Lucid Air Grand Touring is astonishingly deft at handling a series of curvy backroads. Both the Grand Touring and Grand Touring Performance are highly capable in that regard, with the Performance differentiating itself with the increased power and slightly more sporty tuning.

Eschewing a thematically appropriate air suspension for a traditional coil spring setup and hydraulic brakes give the Lucid a more connected feel in speedy driving than some of its contemporaries like the Mercedes-AMG EQS. There is an absence of artificial sound piped in as well, allowing drivers to hear the motors and tires in action while they scramble to hug corners and gauge brake zones while the Air rockets towards the next bend. For a 5,200-pound car, it’s very predictable and accommodating, so the ample available power is rarely too much to handle.

Brakes seem to be the weakest link in the performance chain, but the Air is meant to be a luxury car, not a rally racer. Still, if there was any doubt of its sporty capabilities, one need look no further than the car’s performance at this year’s Goodwood Festival of Speed, where Top Gear’s former Stig and James Bond stunt driver Ben Collins drove it during Goodwood’s famous hill-climb, setting a record time and making the Lucid the fastest production car at this year’s event. 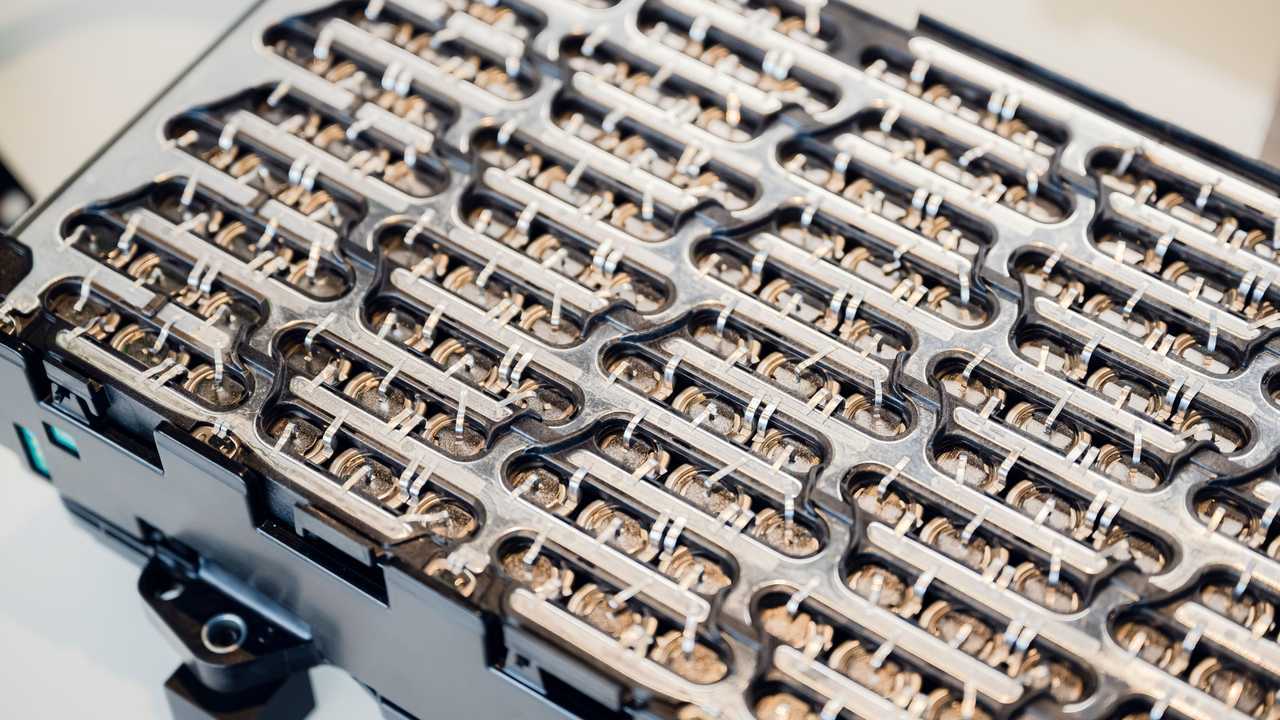 As Lucid began as a battery developer for electric vehicles, energy storage and recharging is a particular feather in the brand’s cap. The Air Grand Touring has a 112.0-kilowatt-hour capacity while the Grand Touring Performance increases this to 118.0 kWh. It’s good for an EPA-estimated range of 446 miles or up to 516 miles, depending on the version of the Grand Touring and if it’s fitted with 19- or 21-inch wheels. Its most efficient combo gives it 4.6 miles per kilowatt hour if you’re not mashing it.

Quick recharging is credited to Lucid’s “Wunderbox,” a 900-volt+ architecture with the ability to recoup 300 spent miles in 21 minutes if connected to 350-kilowatt DC fast charger. Lucid is vague on how quick the Air charges on a level 2 connection, but the company states that the Lucid Connected Home Charging System can deliver 40 miles worth of power returned to the car after an hour’s charge. This is increased if it’s connected to a NEMA 14-50 outlet.  The Wunderbox hardware also makes the Air Grand Touring’s power capable of bidirectional flow, so it can power a house with the Lucid Connected Home Charging System or another juice-stricken EV in a pinch 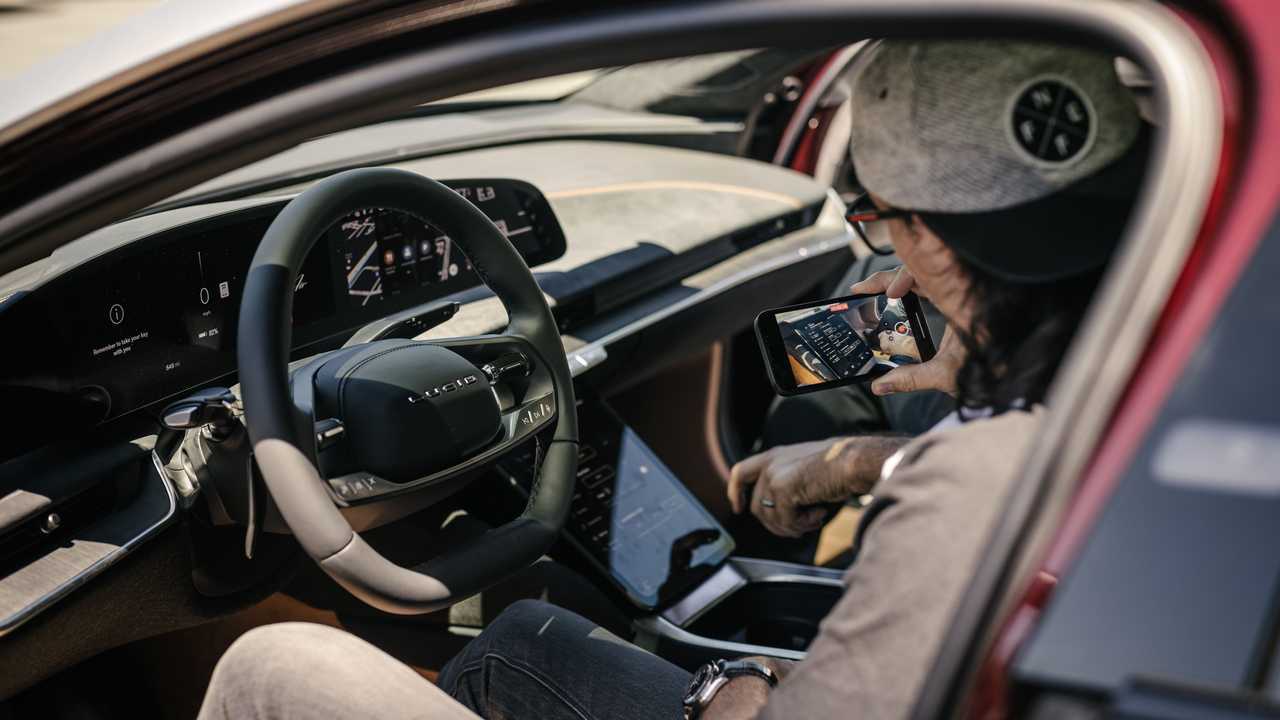 Inside the Air Grand Touring is an elegant cabin that has taken the “design” part of minimalist design to heart. A floating 34-inch glass display arches from the driver door to the center console. This display is segmented into three sections: the left being reserved for mundane functions like window wipers, door locks, and headlamps, the center is the gauge cluster, and the right side is the access point for navigation and entertainment.

It’s a clean interface that doesn’t change too dynamically when different elements are in use. For instance, the center cluster is far less customizable than what’s commonplace in other luxury vehicles, EV or otherwise. It simply displays data on a few immediate functions like speed, remaining charge, and the status of the drive assists. It only alters when the turn signal is in use, switching to a blind spot monitor.

The right touch screen works in tandem with a 12.3-inch screen in the center console. This supplemental screen houses controls for the different drive modes, HVAC, and deeper settings menus for various car functions. With a swipe from the dash screen, a driver can perform functions like extend the nav’s map down to the dash screen for additional route options, but as welcome as this extension is, it exposes the UX’s shortfalls. 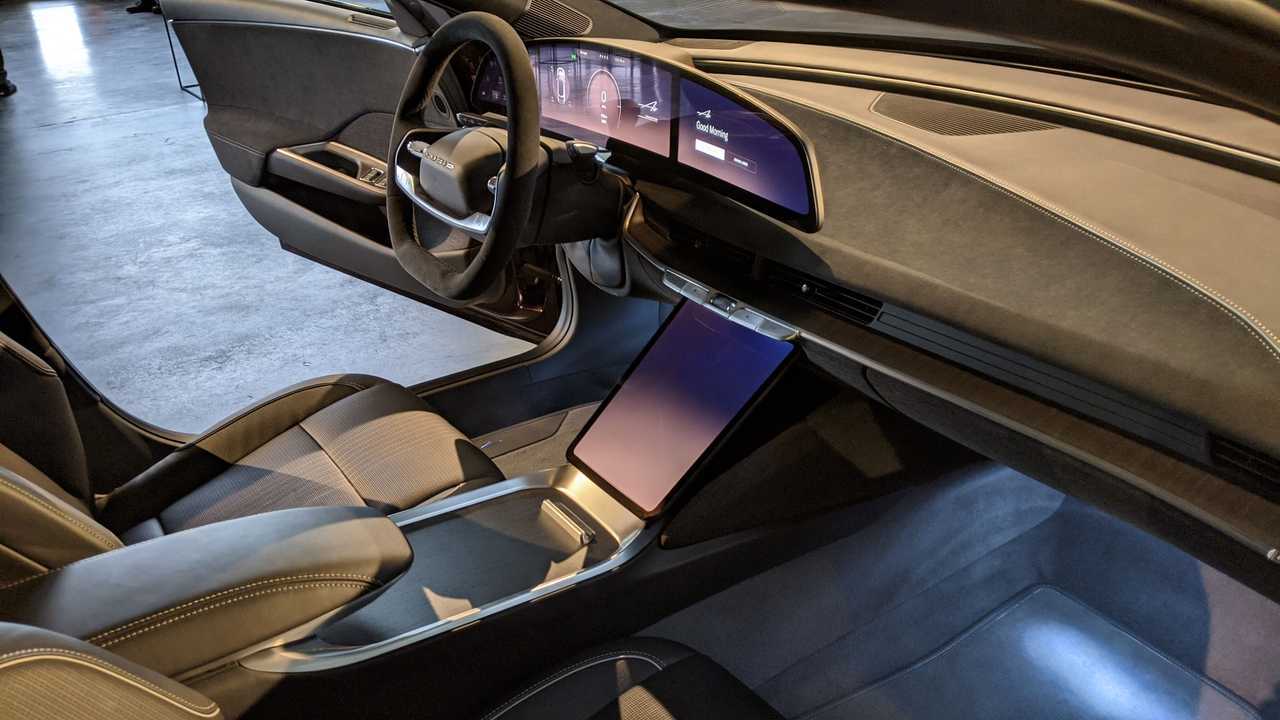 Compartmentalizing and streamlining functions is good, but this interface lacks the flexibility found elsewhere. For example, there’s no current way to display a map on the dashboard and entertainment on the console, or vise-versa, or in any other combo – it’s strictly one or the other. That lack of flexibility and open real estate on the screen could be better utilized, and thankfully, there are updates already on the way to address some of these issues.

Drive assists come in the form of DreamDrive Pro, Lucid’s LIDAR-equipped system which is future-ready with hardware that can accommodate more sophisticated autonomous modes like highway hands-free driving, which is in the pipeline. As it stands now, the ADAS system uses 32 different sensors to function as an adaptive cruise control system, park assist and highway assist. A situation display similar to Tesla’s informs the driver of what the Lucid sees in front of it with graphical representations of a car. With lane-keeping on, its level of obtrusiveness is up to the driver, ranging from warnings to steering intervention. Switching off is worth doing when transitioning to a sporty setting, but this is buried in menus, like many other features. 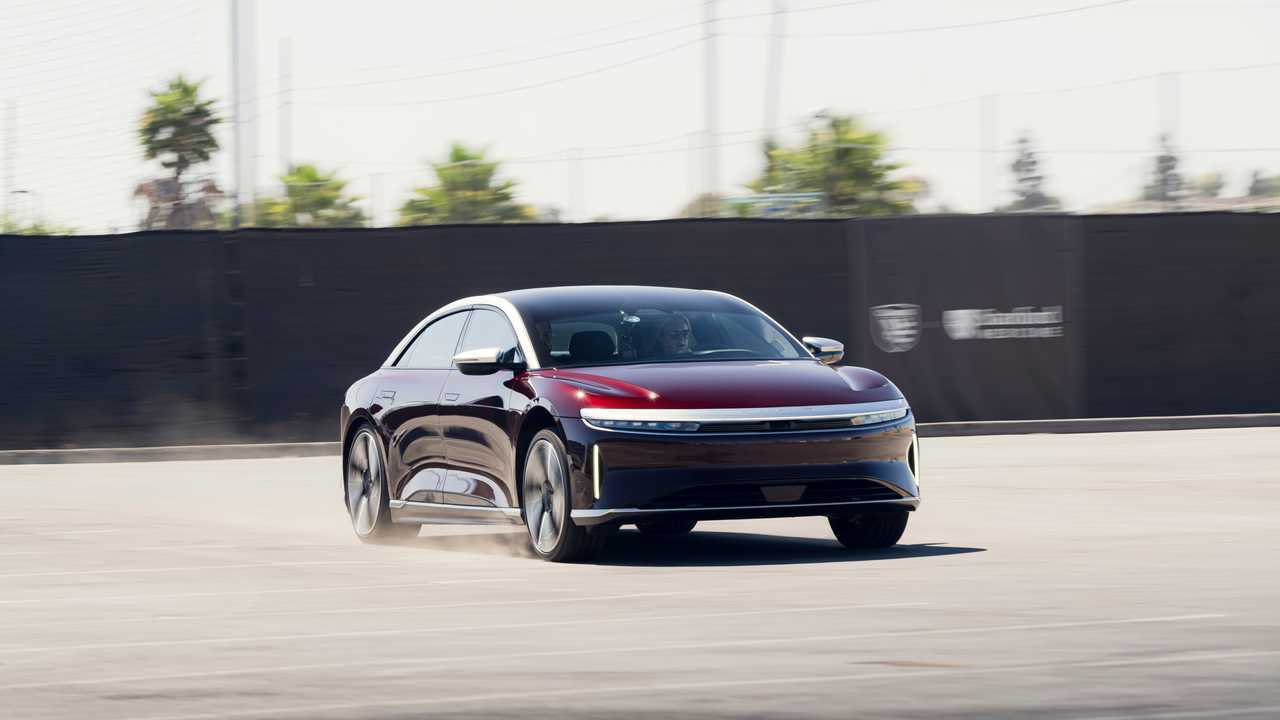 A Bit Too Streamlined?

There’s little doubt that the Lucid Air Grand Touring Performance will be a stunning delight for anyone who gets behind the wheel. Its immense power, married to a conventional suspension and hydraulic brake system, blends cutting-edge EV tech with time-tested components that results in a brilliantly quick car that is incredibly manageable and delivers a suitable amount of feedback to the driver. Its power and usable range is nothing to sniff at, and if charging times prove to be as significant as Lucid claims, the Air Grand Touring Performance will be a new benchmark for many EV fans.

With that said, at a starting price of $154,000 for the Grand Touring and $179,000 for the Performance, the curated experience Lucid purports to provide starts to look a little thin in the customization and function department. A streamlined UX is welcome in contrast to the bloat and cognitive overload but experienced EV drivers, either upgrading or conquests, will find hunting through menus for systems that they’re used to toggling on the fly frustrating.

The same goes for a lack of versatility when it comes to the infotainment screen’s layout and functionality. The saving grace here is that all of these are addressable by the OTA updates Lucid is constantly working on, and are subject to change pending enough customer feedback. There’s also the small matter of putting money down on promised functions, and we’d be remiss if we didn’t mention how a substantial leap of faith that is, monetarily speaking. All told, it’s an impressive EV with stellar performance and a few updates away from ironing out the kinks.

How Much Does A Lucid Air Cost?

Is Lucid A Chinese Company?

No. Lucid is a publically traded American company based in Newark, California.

Is The Lucid Air In Production?

Yes. Lucid is currently delivering the new Air Grand Touring and Grand Touring Performance models. A base Pure trim and a mid-range Touring model will arrive in the fourth quarter of 2022.