If you’re looking for an honest-to-goodness, rear-wheel-drive car with a naturally aspirated V8 – good luck. There are only a few vehicles out there that still carry the torch, and most of them have two doors and/or six-figure price tags, which puts them out of reach for the average consumer.

The 2022 Lexus IS 500 F Sport Performance keeps the dream alive, at least temporarily, with the brand’s iconic 5.0-liter V8 underhood. This performance sedan packs 472 horsepower and rear-wheel drive, along with a sweet, sweet soundtrack, all for the reasonable asking price of $57,570.

But for as charming as that naturally aspirated V8 is, more aggressive tuning to the suspension and steering would have really put this car over the top. It’s not the hardcore IS F you were hoping for, but the IS 500 F Sport does just enough to keep that sports sedan essence alive. And it could very well be the last time we see a car like this.

A vehicle’s ratings are relative only to its own segment and not the new-vehicle market as a whole. For more on how Motor1.com rates cars, click here. 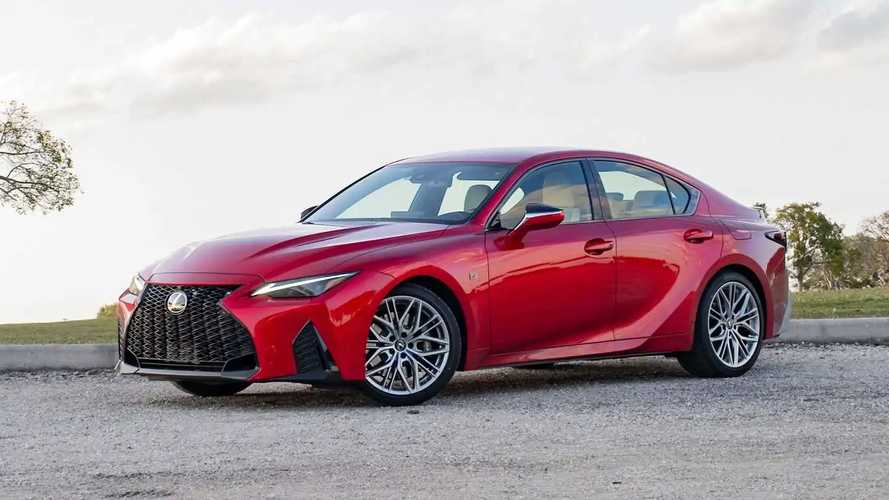 Unlike the original IS F or even the newer GS F, there’s little on the exterior of the IS 500 F Sport Performance that tells you this car has a V8. Sure, the new 19-inch Enkei wheels are all silver and spokey, the grille gets a sharper diamond design, there’s a crisp hood bulge, and the iconic stacked quad tailpipes live out back. But that’s it as far as the visual upgrades go; this is basically an IS 350 with a few subtle tweaks.

Some people will like the “sleeper” appeal of this sedan – and at its core, the Lexus IS is still a very attractive vehicle. But I prefer the chunky fenders and dramatic curves of past Lexus F models. At least this car’s Infrared paint job ($595) is stunning, and those aforementioned 19-inch wheels come standard on this IS, giving it a great stance.

The cabin is equally unthemed. A few gratuitous “F Sport” badges dot the door sills and come stitched into the headrests of the sport bucket seats. Otherwise, the IS 500 F Sport wears bland but inoffensive black-and-white synthetic leather with a unique geometric pattern on the door panels. Or you can murder out the cabin with faux black. Lexus limits the more interesting red upholstery to specific exteriors, so you can’t go for red-on-red, sadly.

For a compact sedan with a big V8, the Lexus IS 500 F Sport Performance is surprisingly plush. As with other IS trims, this version has a sublime ride, great damping, and a whisper-quiet cabin – apart from some newfound engine noise. The suspension soaks up imperfect pavement and glides over highways, and although there is a touch of additional harshness courtesy of those 19-inch wheels, it’s barely noticeable over the standard model.

The upgraded front buckets in the IS 500 are extremely comfy; there’s lots of padding, great bolstering, and many adjustability options. Pair that with the most legroom in class, and the front compartment is a great place to sit. The second row suffers, though, from a small-ish rear opening that makes ingress and egress difficult, and a cramped compartment. At least the rear bench is nearly as padded as those front buckets, but it’s still too tight a place to sit over long distances.

The Lexus IS also has the worst cargo room in the class. Its 10.8 cubes are down nearly a full cubic foot to the next-worst Cadillac, and nearly seven cubic feet worse than the BMW M340i.

The dreaded Lexus touchpad carries over to the IS 500. On the Premium trim, it manages an optional 10.3-inch touchscreen instead of the base 8.0-inch screen. But even with the bigger display, the infotainment isn’t much easier to use. The touchpad is clunky and makes navigating difficult; you’re better off actually touching the 10.3-inch screen, which Lexus moved closer to the driver for this generation.

Wired Apple CarPlay and Android Auto connections come standard on both screens, as does Amazon Alexa compatibility, and the larger display also offers navigation. Navigation is unavailable entirely on the base F Sport Performance model and it’s a $2,750 option on other IS trims. But the baked-in Lexus Entune interface isn’t the best, with low-res graphics and a clunky home screen.

A welcomed enhancement as part of the Premium package is an upgraded audio system. The IS 500 Premium boasts a 17-speaker Mark Levinson audio system that sounds crystal clear with great bass.

The big selling point of this car is its V8, of course. Lexus’s iconic naturally aspirated 5.0-liter engine makes its way to the IS for the first time since the original IS F, producing 472 horsepower and 395 pound-feet – same as in the RC F. The IS 500 gets a standard eight-speed automatic transmission and rear-wheel drive only.

As expected, this engine doesn’t have a ton of low-end shove. Without the instant boost of a comparable turbocharged unit, it takes the IS 500 4.4 seconds to hit 60 miles per hour. That’s a touch slower than nearly every alternative outside of the Caddy.

Here’s the good news, though: This engine is still utterly charming at the limit. With a redline of 7,300 RPM and max torque delivered at 4,800, you basically have to keep your foot planted for max appeal. Doing so rewards you with freight train-like acceleration and a sonorous sound from the quad exhaust tips. Yes, Lexus pumps some of that sound through the speakers, but who cares? It’s awesome.

But other than that beautifully throaty V8, bigger disc brakes, and a light re-strengthening, this is basically an IS 350 with a V8. The same limited-slip differential and Bridgestone Potenza S001 tires from the 350 F Sport carry over, and the eight-speed transmission goes untouched. That means this IS isn’t as sharp as the comparable Audi or BMW, which get more significant updates.

My biggest gripe is that the IS 500’s suspension is too soft for sharp cornering. While the structural rigidity of this car did improve, there’s still a noticeable amount of body roll. The steering doesn’t feel much improved either; it’s weighty but not as communicative as I’d like.

That unmodified eight-speed automatic is perfectly fine around town, the problem is that it gets sloppy at higher speeds. Unless you fiddle with the paddle shifters on the back of the steering wheel, the gearbox can be indecisive and a bit slow when you’re really hammering this car.

As with most Lexus models, the IS 500 F Sport comes loaded with active safety equipment. The Safety System+ 2.5 includes automatic emergency braking, pedestrian detection, and emergency steering assist, as well as adaptive cruise control with lane-keep assist and lane-centering.

The IS 500 is an excellent highway cruiser. The active safety systems keep the car perfectly centered in the lane while applying light braking and throttle inputs as needed. This isn’t a hands-off system, but you can rest your hands easily on the steering wheel with little input.

The IS 500 model hasn’t been crash-tested by the NHTSA or the IIHS, but the IS 300 and 350 models both receive high marks. The government gives it a five-star crash rating, while the non-profit agency names it a Top Safety Pick+.

As the only V8 option in the class, you shouldn’t expect impressive fuel economy figures from this Lexus. The IS 500 F Sport only achieves 17 miles per gallon city, 25 highway, and 20 combined, which puts it at the bottom. The mild-hybrid BMW M340i is the most efficient of the group, returning up to 26 mpg combined.

The Lexus IS 500 F Sport Performance costs $57,575 to start with the $1,075 destination fee included, which makes it the priciest option of the competitive set (by a few dollars over the next-priciest Mercedes). Opting for the Premium model – like the one tested here – costs $62,075, but at least this model is well-equipped.

The only factory option available on this Premium model is the $595 Infrared paint job, which brings the final asking price up to $62,670. Alongside Ultrasonic Blue Mica 2.0, Infrared is the priciest hue. Otherwise, the larger touchscreen, better audio system, and baked-in navigation all come standard on the Premium.

The IS 500 F Sport Premium is priced competitively and feels worth what the company is asking for it. Well-equipped versions of the Audi, BMW, and Cadillac crest $65,000, with a loaded Mercedes-AMG C43 being the priciest of the group. But Lexus does have a big leg up on its competitors: a V8.

While it may not be the sharpest tool in the shed, the IS 500 F Sport Performance is still charming as hell with its old-school hallmarks: a big V8, rear-wheel drive, and a raucous exhaust note. A few more tweaks here and there and this car could have been genuinely great.

Is The Lexus IS 500 F Sport Performance Turbocharged?

No, the Lexus IS 500 F Sport Performance uses a naturally aspirated 5.0-liter V8 that produces 472 horsepower and 395 pound-feet. Other versions of this car, like the base IS 300 with rear-wheel drive, are turbocharged.

Does The Lexus IS 500 F Sport Performance Offer All-Wheel Drive?

While other versions of the Lexus IS do offer all-wheel drive as an option, the Lexus IS 500 F Sport Performance is only available in a rear-wheel-drive configuration.

How Much Horsepower Does The Lexus IS 500 F Sport Performance Have?