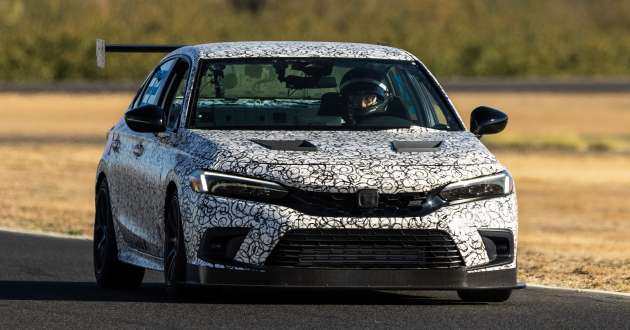 Honda has begun teasing the forthcoming Civic Si, which is the performance version of the 11th-generation Civic that made its full debut back in April. Rumoured to go on sale in the United States later this October, the Civic Si fills the gap between the standard model and the high-performance Civic Type R that was also teased recently.

The camouflaged test car you see here isn’t the final product that customers will get, but is actually a race-prepped version by Team Honda Research West (THR-W), an after-hours racing team sanctioned by Honda and operated by its employees.

This car will compete at this year’s 25 Hours of Thunderhill race, hence the huge rear wing, stripped-out interior, low ride height, bonnet vents and chin spoiler attached to the front bumper. The camo hides a lot of the details, but there are some cues that look like they will make their way onto the production Civic Si. For starters, there are dual exhaust tips, which is one more than the regular Civic, and they are proudly displayed rather than being tucked away. Elsewhere, there appears to be larger brakes and a “Si” badge can be clearly seen on the familiar-looking front bumper. As per a previous report, there will only be a sedan version of the Civic Si, as the coupe body style has been dropped for this generation of the Civic.

As for the engine, the next Civic Si is expected to keep the same 1.5 litre turbocharged four-cylinder petrol unit as the model it succeeds, although it will likely get a slight power bump over the outgoing model’s 205 hp and 260 Nm of torque. Front-wheel drive will be the default as well, along with a six-speed manual transmission that has already been confirmed for the model.