America’s bestselling pickup trucks have plugged into the electric age with battery electric variants launching sooner rather than later. Following the lead of the Rivian R1T pickup, the Ford F-150 Lightning and Chevrolet Silverado EV provide all of the full-size truck utility consumers expect with none of the tailpipe emissions.

Expected prices range from $40,000 work trucks to six-figure technological marvels. All the details haven’t been sussed out but here’s what we know about the all-electric versions of America’s bestselling truck for 45 years running, and its near-perennial runner up.

The Silverado EV shares its Ultium platform with the GMC Hummer EV and will be related to the gas Silverado in name only. It won’t be as large or as massively heavy as the Hummer EV; both the Lightning and the Silverado EV weigh about 8,000 lb. Both trucks will also come as crew cabs only with short beds. Both trucks have a solid front face with a frunk that lifts up from the bumper to optimize storage.

The Silverado EV is about an inch longer than the gas model, and Chevy says it will have a larger cab than any other full-size truck. The EV rounds off the big blocky ends of the gas Silverado, and from the C-pillar through the rear bumper, it takes on Avalanche proportions, thanks to its clever bed storage. The charge port is on the rear driver’s side, and up front, an available light bar cinches the thin LED DRLs over the bowtie logo.

The F-150 Lightning is a bit longer and taller than the gas F-150, but its proportions will appear similar. It rides on an independent rear suspension, uses a steel body-on-frame design unique to the Lightning, and the body is made of high-strength aluminum alloy, similar to the gas F-150. Up front, beyond the charge port in the driver’s side front fender, the Lightning’s C-clamp headlights bridge a single LED lightbar across the front. A single light bar spans the tailgate as well, but don’t look for any tailpipes below. 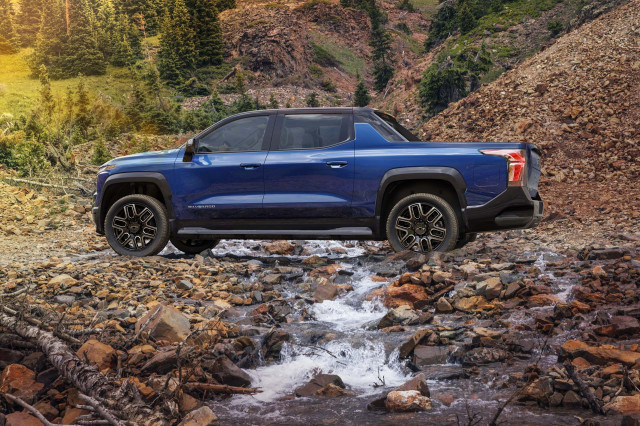 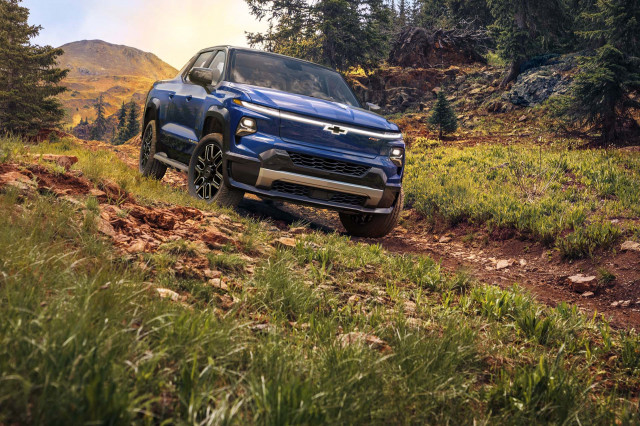 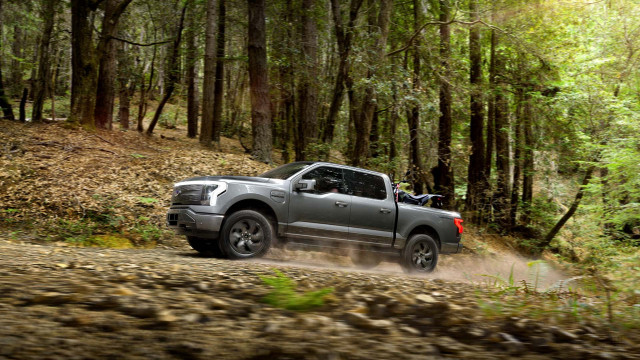 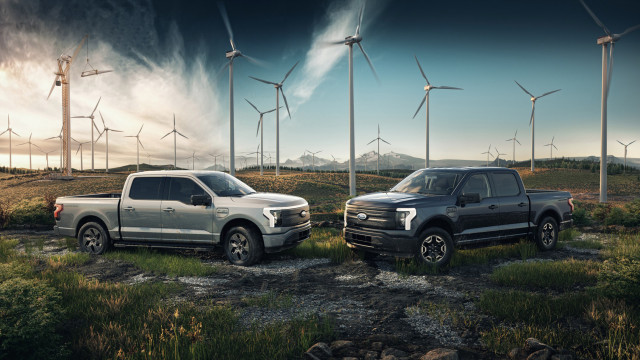 Ford disclosed more specific specs than Chevy, likely because the Lightning is getting ready to roll out of dealerships. The dual in-board motors are powered by either a standard-range 98-kwh battery pack good for 230 miles or an extended-range 131-kwh pack with an estimated 300-mile range. Either pack can create up to 775 lb-ft of torque from the motors, while the standard range generates 426 hp and the larger pack makes 563 hp. The extended-range Lightning hits 60 mph in the “mid-4-second range,” according to Ford, who added that it’s quicker than a Raptor and the max torque is more than any other F-150. Towing capacity reaches 10,000 lb and Lightning has a max payload of 2,000 lb.

The Silverado EV Work Truck, or WT, comes with front and rear motors making 510 hp and 625 lb-ft of torque. With standard all-wheel drive and a steel suspension, it will be able to tow up to 8,000 lb and carry a payload of up to 1,200 lb. Chevy did not disclose battery size in its base model. The top RST First Edition trim that arrives later has more information because its propulsion unit is the same as the First Edition GMC Hummer EV. It makes 664 hp and 780 lb-ft, with a 24-module, 200-kwh battery pack, and it has an estimated 400-mile range. Chevy also quotes a 0-60 mph time of less than 4.5 seconds and a towing capacity of 10,000 lb, but the payload is significantly less than the Lightning at 1,300 lb. It will have an air suspension with four inches of range and rear-axle steering. 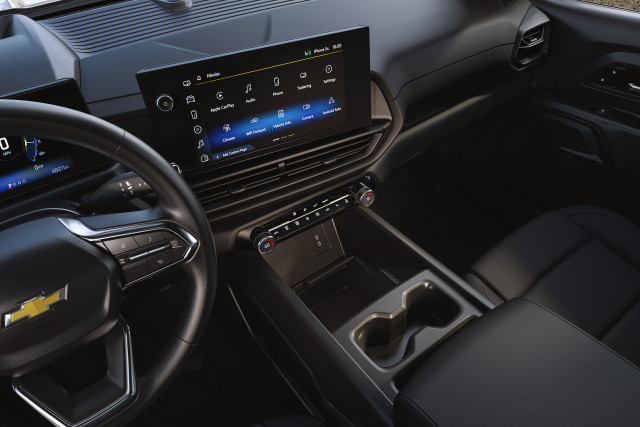 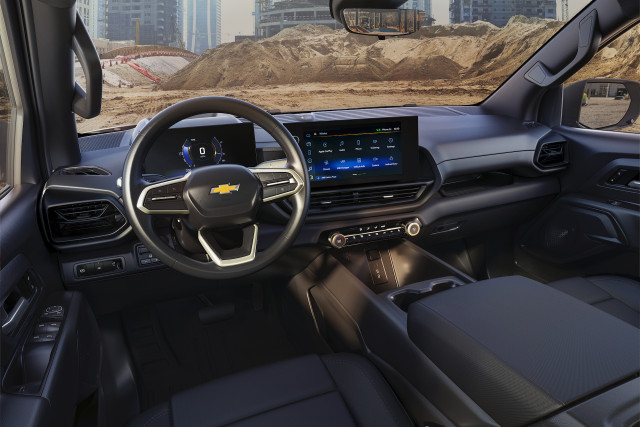 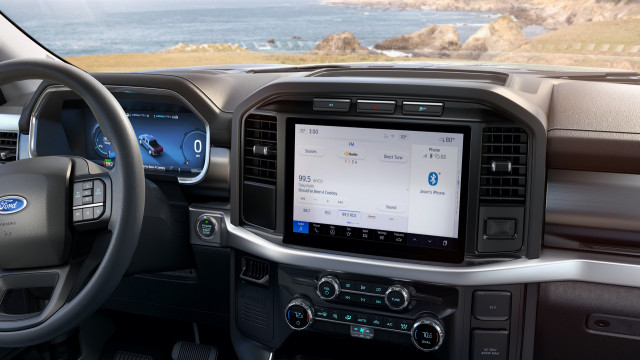 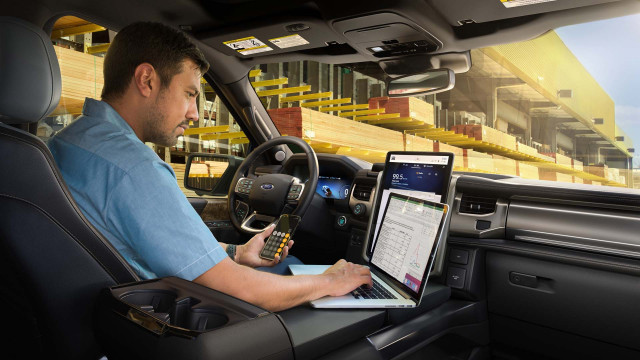 Both electric trucks only come as crew cabs, and the Silverado EV’s 5-foot-11 bed is larger and more versatile. The RST model will also have an interior gate that opens up to the bed much like the Chevy Avalanche of old. Opening the 60/40 split mid-gate into the cabin will allow items up to 9-feet long to fit. Lower the standard Multi-Flex tailgate, raise its rear stop, and the bed fits 10-foot-10 items.

The F-150 Lightning only comes with a crew cab and a 5-foot-5 bed. The waterproof drainable frunk can hold up to 400 lb in 14 cubic feet of space, and it has two USB chargers and four electrical outlets. We expect it to have onboard scales that show payload levels in the taillights, as in other new F-150s. 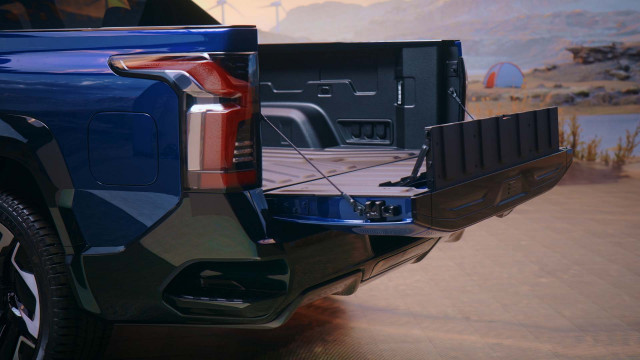 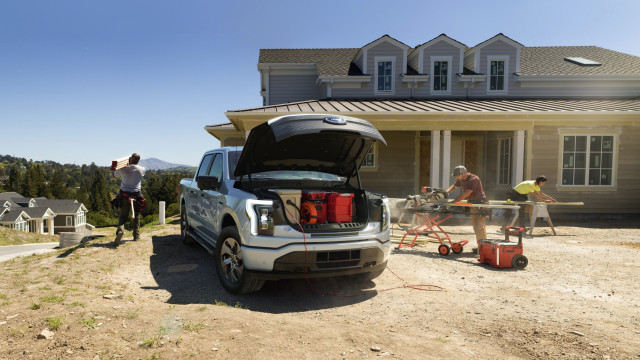 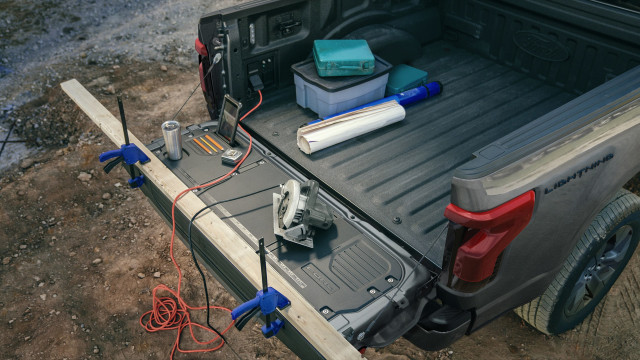 The Lightning can charge appliances or act as a backup home generator. Base versions of the truck get 2.4 kw of output, while top Lariat and Platinum versions get 9.6 kw of output that can power the fridge and lights during a home power outage—and up to 11 outlets. Ford offers an available 80-amp home management system to make it happen.

Chevy hasn’t made the same claim with the Silverado EV, but the potential is there. The Silverado EV will be available with 10 outlets to charge items at campsites and job sites, including a 240-volt outlet in the bed. It will offer 10.2 kw of charging capacity and will be able to charge other EVs, same as Lightning.

Early reservation holders of the Lightning can begin placing orders now, with deliveries arriving this spring. Ford announced this week that production of the Lightning will be increased to 150,000 annually to meet demand. That’s the second production increase since the initial target of 40,000 was announced at the May 2021 reveal. The base 2022 F-150 Lightning Pro with the smaller 98-kwh battery pack costs $41,669, including $1,695 destination. It will be sold in Pro, XLT, Lariat, and Platinum trims. The top Platinum model with the standard larger 131-kwh pack lists at $92,569.

Those prices exclude the available federal EV tax credit that GM no longer qualifies for, at the moment. An expansion of the credit awaits Senate approval. By the time Lightning sales ramp up, cumulative EV sales at Ford likely will have reached at least the first phase of the roll back. GM vehicles no longer qualify for any portion of the credit.

Starting in spring 2023, the 2024 Silverado EV will be sold only in WT trim, with the bigger battery, at a price not yet disclosed. Chevy has not disclosed the battery size of the base model. In the fall of 2023, Chevy will sell the top-of-the line RST First Edition for $105,000 with the 200-kwh battery and an estimated range of 400 miles. A base WT with a smaller pack will arrive later, for $39,900, including destination. Chevy has not disclosed production estimates.

Ford has the clear lead on getting its EV truck to market, but it won’t be the only one and it won’t be for long.

The Best Touring Tires, According to Tire Rack Customer Reviews