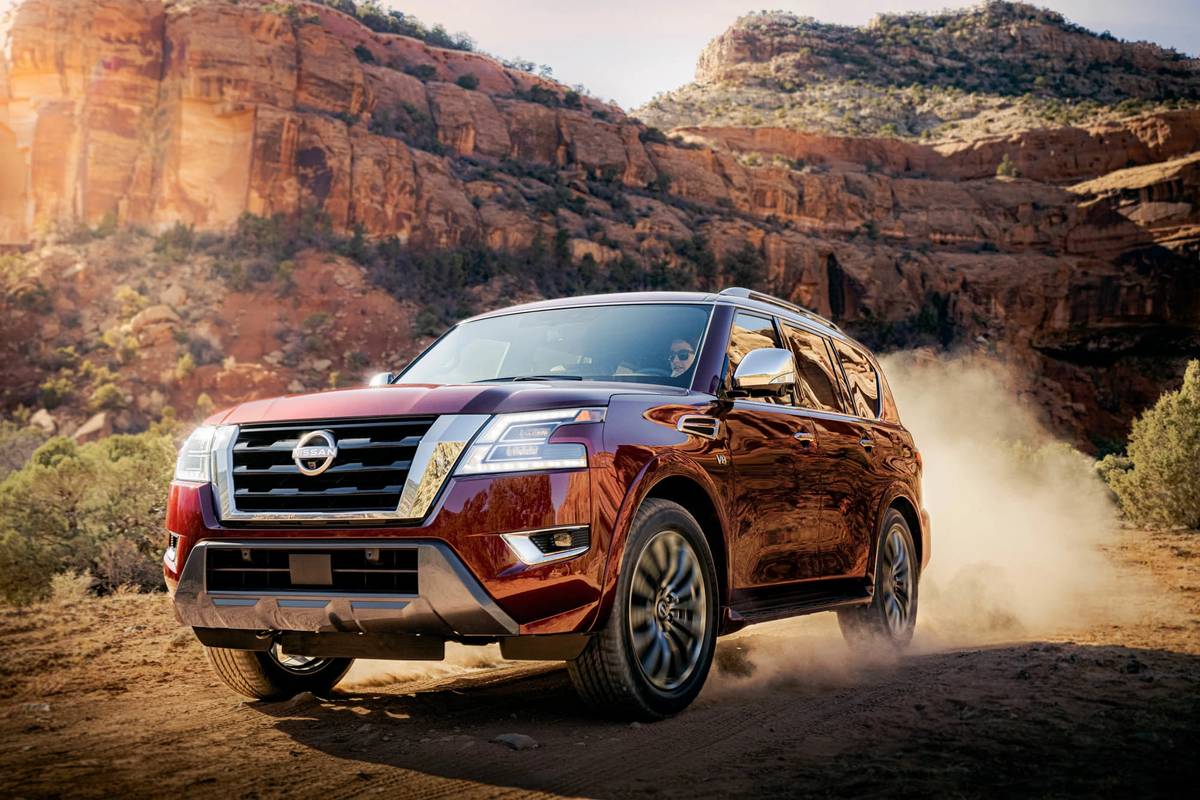 Looks like: The current Armada with Nissan’s newly angular designs, front and rear

Nissan’s popular full-size SUV is about to get its first big refresh since it switched platforms to join the global Nissan Patrol chassis back in 2016. As part of the new Nissan Next campaign that brings 10 new or refreshed vehicles to market in the next 20 months, the big SUV gets a little love to align its style with the rest of Nissan’s new lineup. It also gets some new features, an upgraded interior and a little more power from its standard V-8 engine to gain bragging rights for best-in-class standard horsepower and towing capacity. 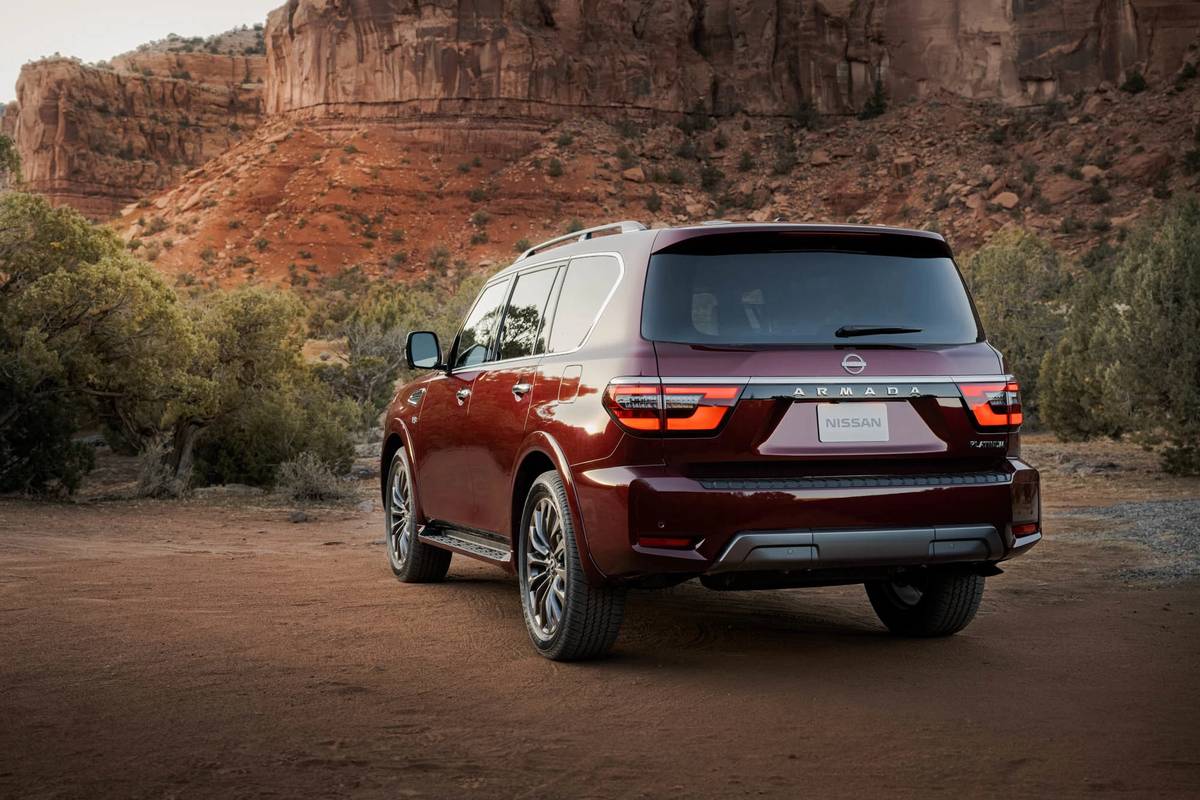 The updated Armada gets a fairly extensive styling refresh, with everything forward of the front doors sporting a new look. Standard LED headlights sit over a new bumper and flank a new grille, all of which bring the Armada more in line with the look we’ve seen on the new Rogue and Murano, as well as the refreshed 2021 Kicks. Out back, new LED taillights are connected by new silver trim that stretches the width of the redesigned liftgate. The Armada has some new wheels, as well, and a new Midnight Edition that hasn’t yet been seen on the SUV will bring a blacked-out look with a black painted grille, mirrors and roof rails, plus smoked taillights, front and rear skid plates and logos, and unique 20-inch wheels.

Inside, the big news is an update to the Armada’s multimedia system and center console, modernizing it considerably. Gone are the smallish display and myriad buttons scattered all over, replaced by a much cleaner 12.3-inch touchscreen atop a revised center control panel with touch-sensitive climate controls. A new, 7-inch information display augments the gauge cluster to further improve the overall look, while a new console door sits ahead of the shifter to hide the wireless charging pad for a smartphone. New materials everywhere further push the Armada upscale, too. A new electronic trailer-brake controller is also now standard. 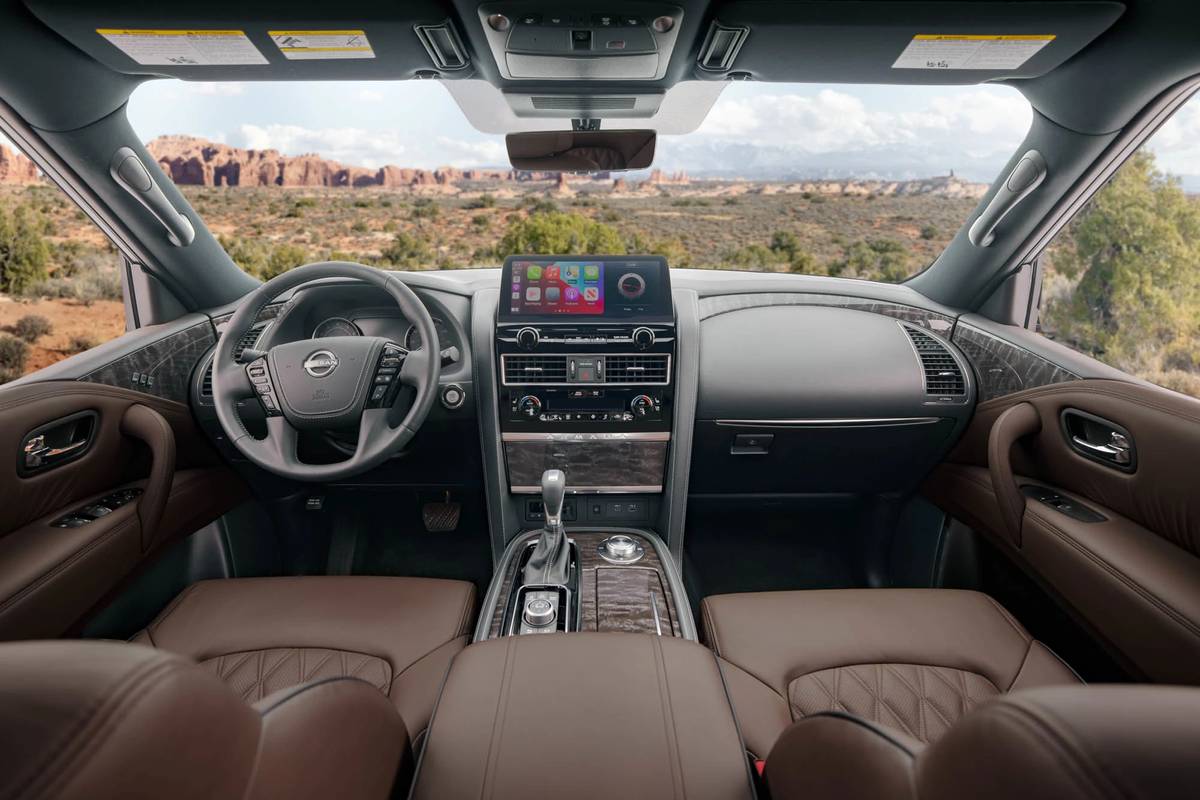 Eight-passenger seating with Prima-Tex upholstery is standard; captains chairs can be had with quilted leather on the top-line model, called the Platinum. Four interior colors are available: Almond, Brown and Charcoal, with a black leather interior coming as part of the Midnight Edition Package (along with some unique floormats). Three trim levels will be available at the start: SV, SL and Platinum, with leather seats included with the SL trim. A lower cost-leading S model will come later in the year, but Nissan declined to give many early details on this new trim level.

Among the standard equipment, the Armada now has more USB power ports — two front and two rear, with one USB-A and one USB-C in each pair — plus wireless Apple CarPlay (albeit wired Android Auto), a Wi-Fi hot spot and NissanConnect services. Optional are 360-degree cameras, an upgraded rear entertainment system, wireless charging, Nissan Concierge services and a rearview camera mirror.

Under the Hood: Towing Capacity and MPG

Powering the 2021 Armada is the same 5.6-liter V-8 engine; it now makes 400 horsepower and 413 pounds-feet of torque on premium gasoline, or 390 hp if you stick with regular unleaded. (The 2020 Armada made 390 horsepower and 394 pounds-feet of torque, with no gains on premium fuel.) That’s good enough to claim the title of best-in-class standard horsepower for a full-size SUV, and it allows Nissan to also give the Armada a best-in-class rating for standard towing capacity of 8,500 pounds. It’s all mated to a standard seven-speed automatic transmission (the nine-speed from the Titan pickup didn’t quite make the cut apparently) and standard rear-wheel drive, with automatic four-wheel drive an option. Nissan says that fuel economy will be unchanged from the outgoing model, meaning it’s awful: 14/19/16 city/highway/combined for 2WD, 13/18/15 mpg for 4WD. 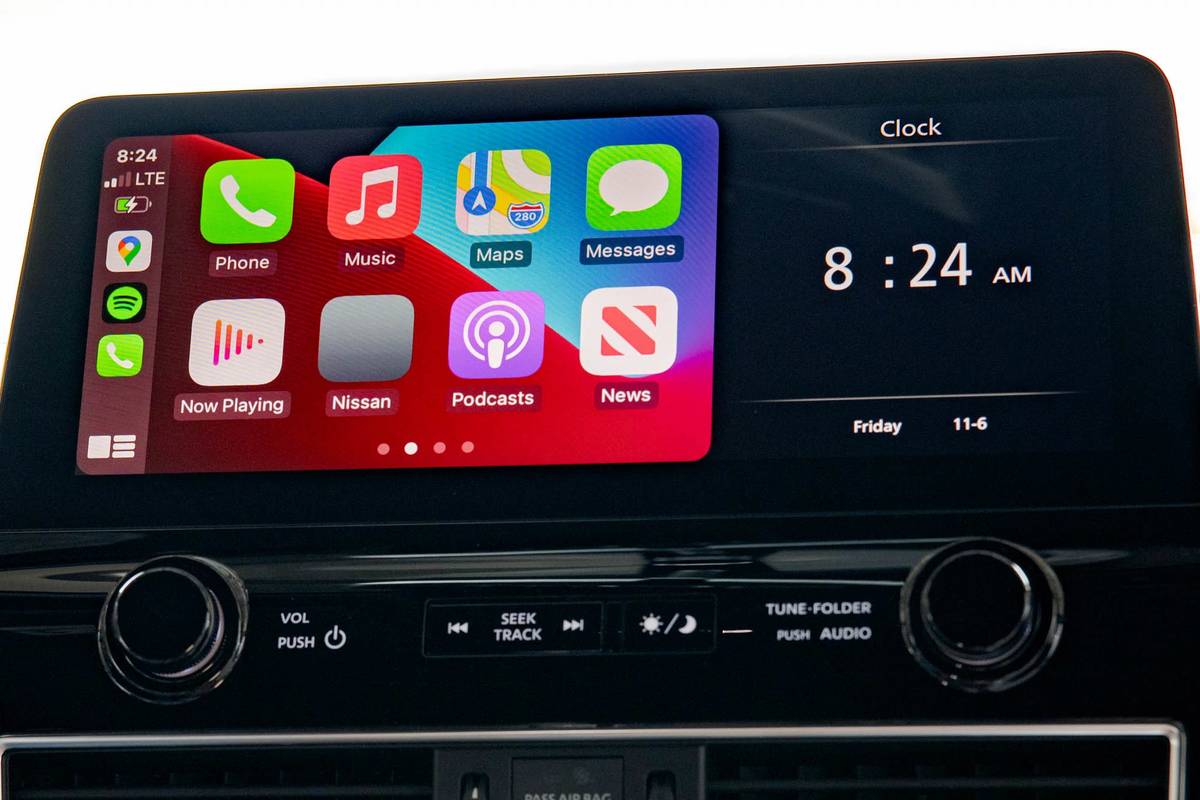 Pricing has not been announced for the new Armada, but it should be coming soon, as the SUV is set to show up in dealerships starting in late January 2021.

Tesla's Suspension Issues Get Terrifying At 200 Km/h On Autobahn