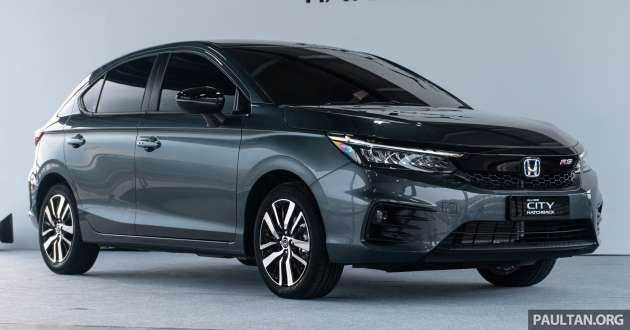 Honda Malaysia has just held a preview of the upcoming City Hatchback at the Sepang International Circuit, giving us a first glimpse of the Jazz replacement ahead of launch. Just two variants were shown to the press (the V and RS e:HEV), so we’ll have to save the S and E variants for later.

Let’s kick things off with the new stuff, starting with exterior colours. The hatch looks to be donning the new Ignite Red Metallic, which is a slightly deeper red compared to Passion Red Pearl that is currently on offer.

There’s also a new shade of grey that appears much darker compared to the existing Modern Steel Metallic, and a quick check on Honda Thailand’s website reveals that the paint is called Meteoroid Grey Metallic. This would be a first for Honda cars in Malaysia, though it remains to be seen if the colour will be extended to other CKD models as well. 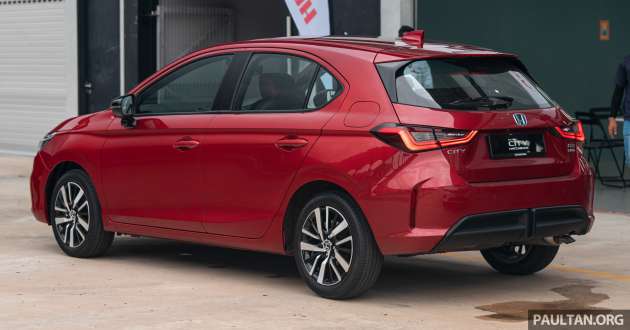 According to the company, the hatch has a slight increase in torsional rigidity compared to the sedan, and more sound deadening materials (including under-bonnet insulation) have been used to improve NVH levels. The rear wheel wells remain bare, but we were told that the cars on display were pre-production units, so this may or may not change at launch.

There’s also a single LED used for the rear license plate number, which is an upgrade from the sedan. The RS is the only variant to get the chunky split rear diffuser with carbon print, while vertical reflectors and LED combination tail lights are standard issue.

Both the V and RS ride on 16-inch wheels that are identical in design to their respective sedan siblings, and the factory tyres are the same Toyo Proxes R57. To differentiate the hatch a bit further, the lower grille insert on the City Hatchback V gets the same honeycomb treatment as the RS, whereas the sedan wears the more conventional twin louvred version.

For the interior, Honda Malaysia is only permitting us to reveal three features, starting with the eight-inch touchscreen display. This is of course identical to the sedan, so it should support Apple CarPlay and Android Auto (wired connection), and it could also be hooked up to the same eight-speaker sound system.

The second feature would be the rear air vents, which again, are exactly the same ones found in the sedan. The final and arguably the feature that makes the City Hatchback unique is Ultra Seats. This function is essentially carried over from the Jazz, and offers four flexible seating arrangements – Refresh, Long, Tall and Utility modes. If you’re looking for a practical hatch, this one is hard to beat.

Mechanically, the hatch is identical to the sedan, so the 1.5 litre DOHC i-VTEC mill delivers 121 PS and 145 Nm of torque, making it among the most powerful in its segment. A CVT drives the front wheels. Meanwhile, the RS e:HEV gets Honda’s complex i-MMD hybrid system, which offers 109 PS and 253 Nm of torque. Click here to learn all about how the hybrid system works in our in-depth review.

Now, Honda Sensing seems to be reserved only for the top RS e:HEV variant, offering the same seven functions as the sedan. There’s adaptive cruise control (without low speed follow), collision mitigation braking system (AEB, front only), forward collision warning, lane keep assist system, road departure mitigation, lane departure warning, and auto high beam. The V model on show did not seem to be equipped with Sensing, so it remains to be seen if there will be a V Sensing variant.