From the Crown Victoria of yesteryear to the Explorer-based cruiser of today, Fords have been a favorite with police for decades now. The men and women in blue’s loyalty to the Blue Oval, though, does not appear to extend to Ford’s electric crossover, the Mustang Mach-E. That car received less than favorable marks at the hands of testers in a new police vehicle evaluation.

Michigan’s Department of State Police and Department of Technology, Management and Budget recently trialed 11 different cars and trucks for potential law enforcement use. This was part of their 2022 Model Year Police Vehicle Evaluation Program, whose results have just been published. Said vehicles consisted of the Mach-E and various versions of the Chevy Tahoe, Dodge Charger and Durango Pursuit, the Ford Police Interceptor Utility, and an F-150 Police Responder. Each was subjected to a combination of instrumented performance tests and usability surveys, where officers subjectively scored their accessibility, ease of use, and overall comfort. 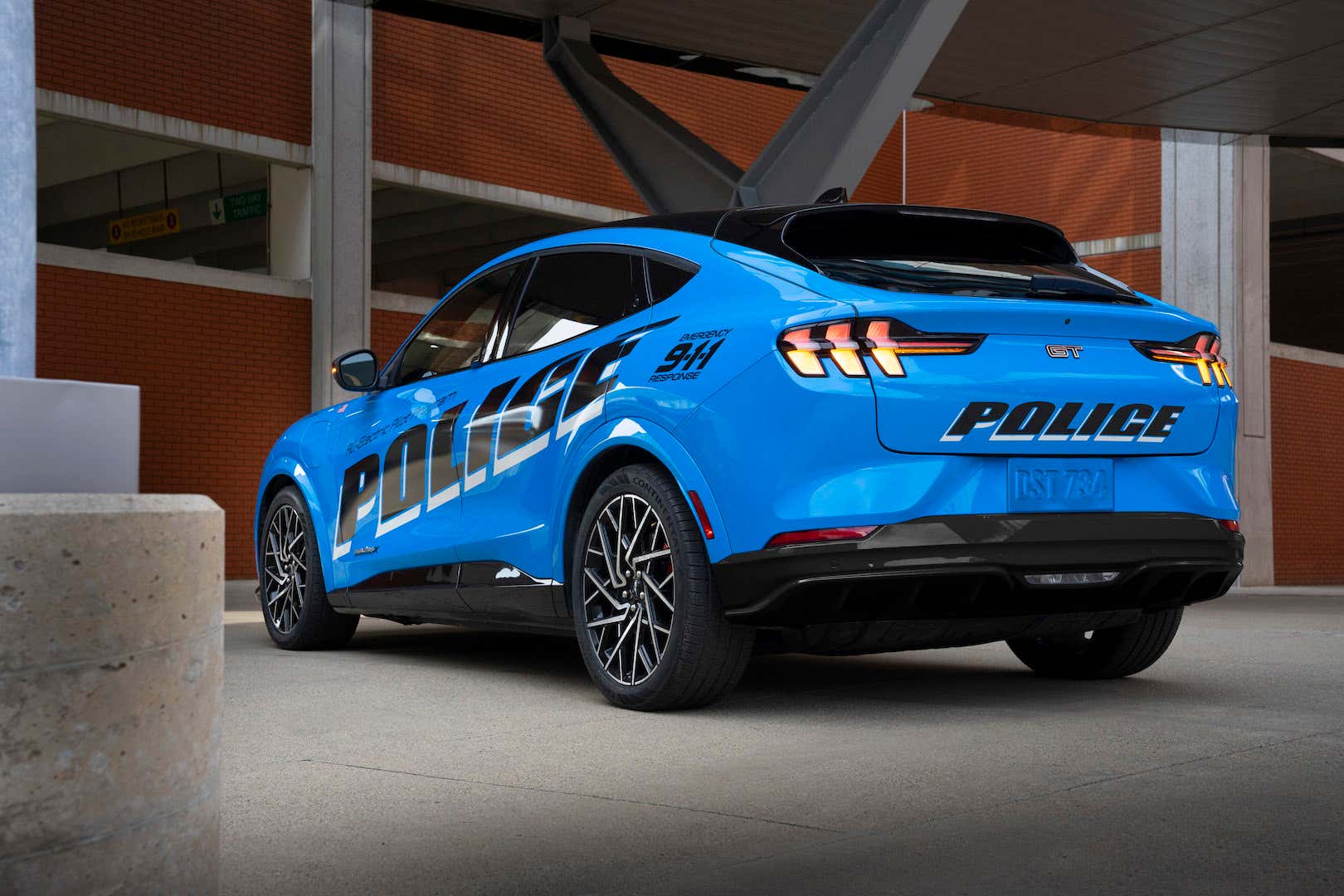 The Mach-E performed its best in acceleration and braking tests, achieving the quickest zero-to-60, 80, and 100 mph times, and stopping a few feet shorter than any other vehicle tested. Officers ranked its trunk release as the second-best and considered it third as far as pedal size and position goes. They also noted its low operating cost, though that was the end of the praise they had for the Mach-E, which in all other tests ranked second-lowest or the outright worst.

While the Charger received the lowest scores for its back seat, the Mach-E wasn’t far ahead, and its HVAC controls and instrumentation clarity ranked only better than the Explorer-based Interceptor Utility (whose gauge placement outscored the Mach-E’s). Top speed was tied for second-worst with the four-wheel-drive Tahoe, and above the police F-150, while vehicle dynamics tests surprisingly returned the performance-oriented Mach-E to the bottom. 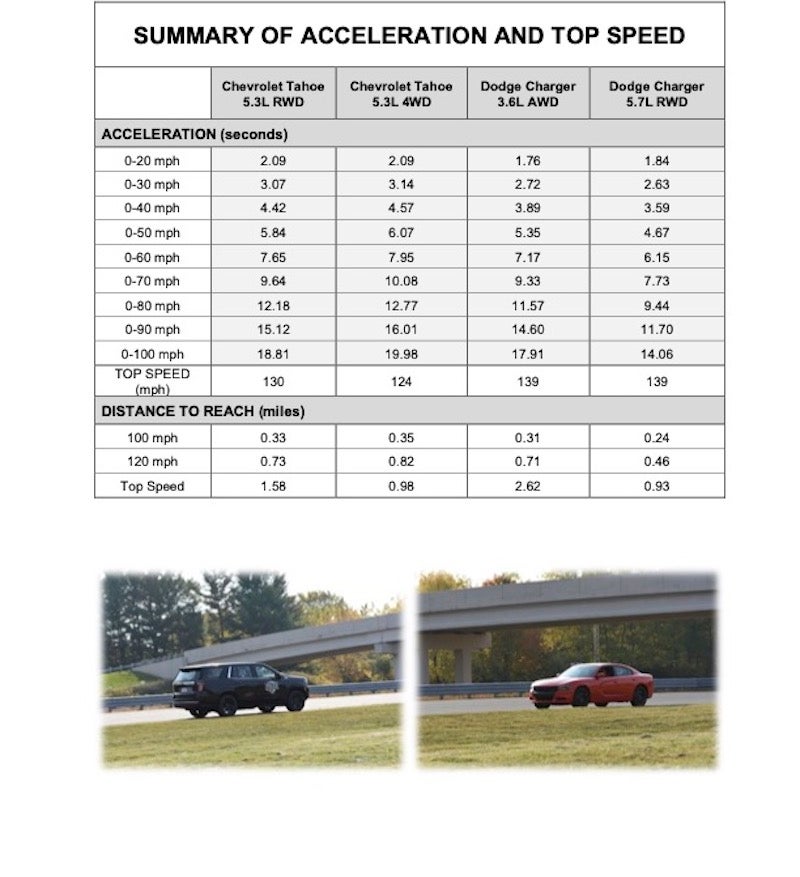 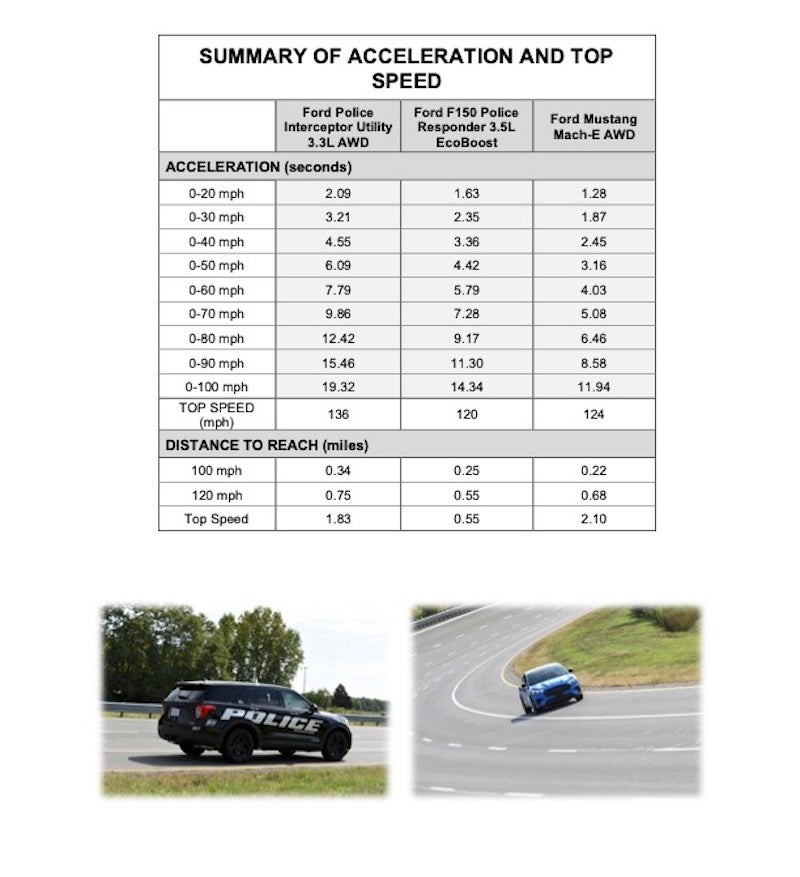 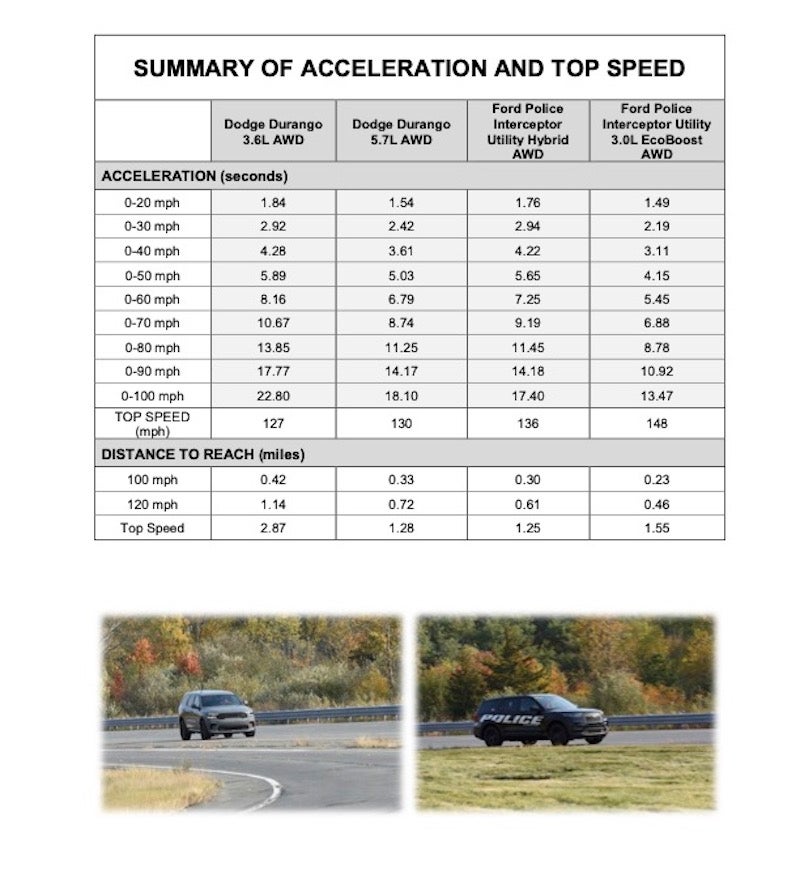 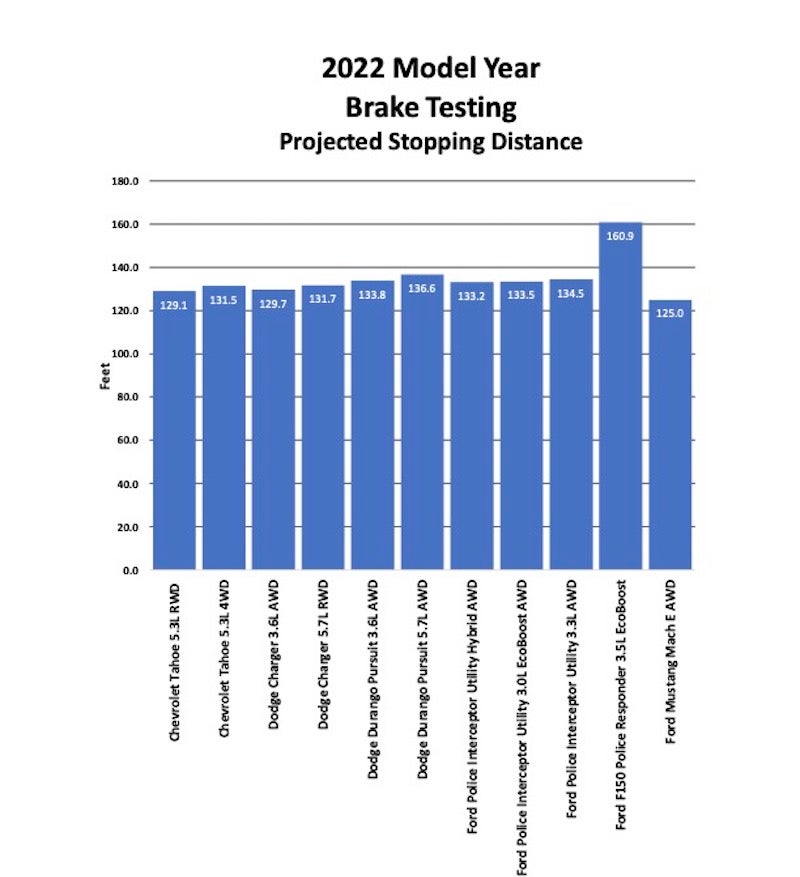 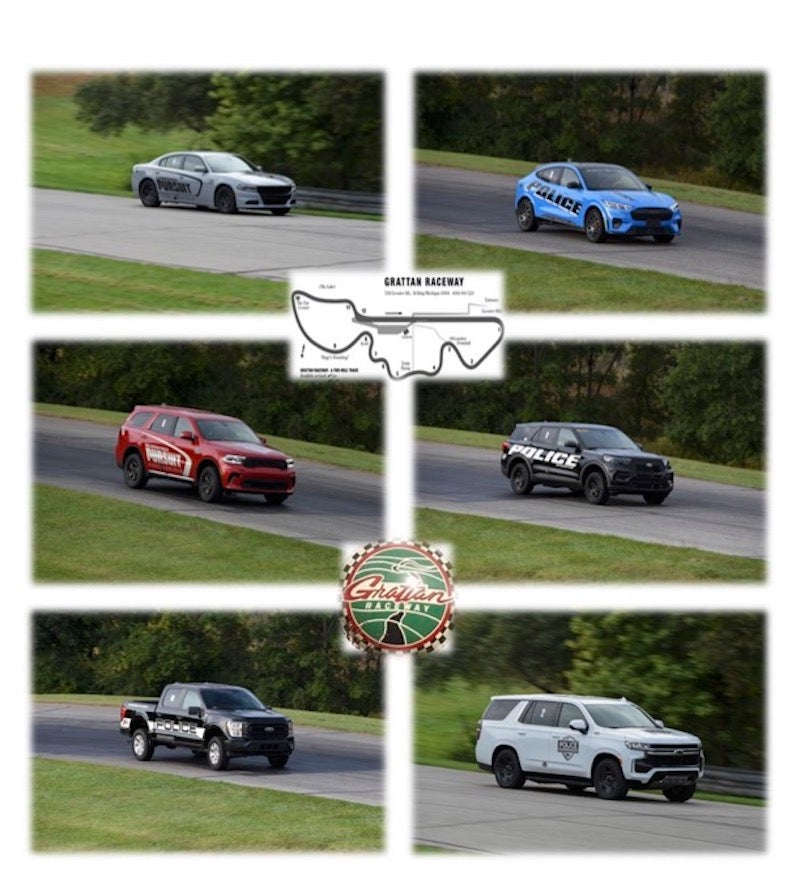 Driven for eight laps of Grattan Raceway by four different officers, the Mach-E averaged the slowest lap times, starting off mediocre and only worsening as battery charge depleted—even though it received some charging between stints. Perhaps the same problems that made the Mach-E fail the moose test reared their head here, too.

Performance wasn’t its only issue, either, as the Mach-E was ranked as the least comfortable and usable in several areas. Its steering wheel and adjustability, mirror controls, door locks, window switches, and stability control access were all dinged, as were dashboard and trunk accessibility. It was ranked as the least comfortable vehicle overall and had the poorest visibility, both likely due in part to the Mach-E’s coupe-like roof. 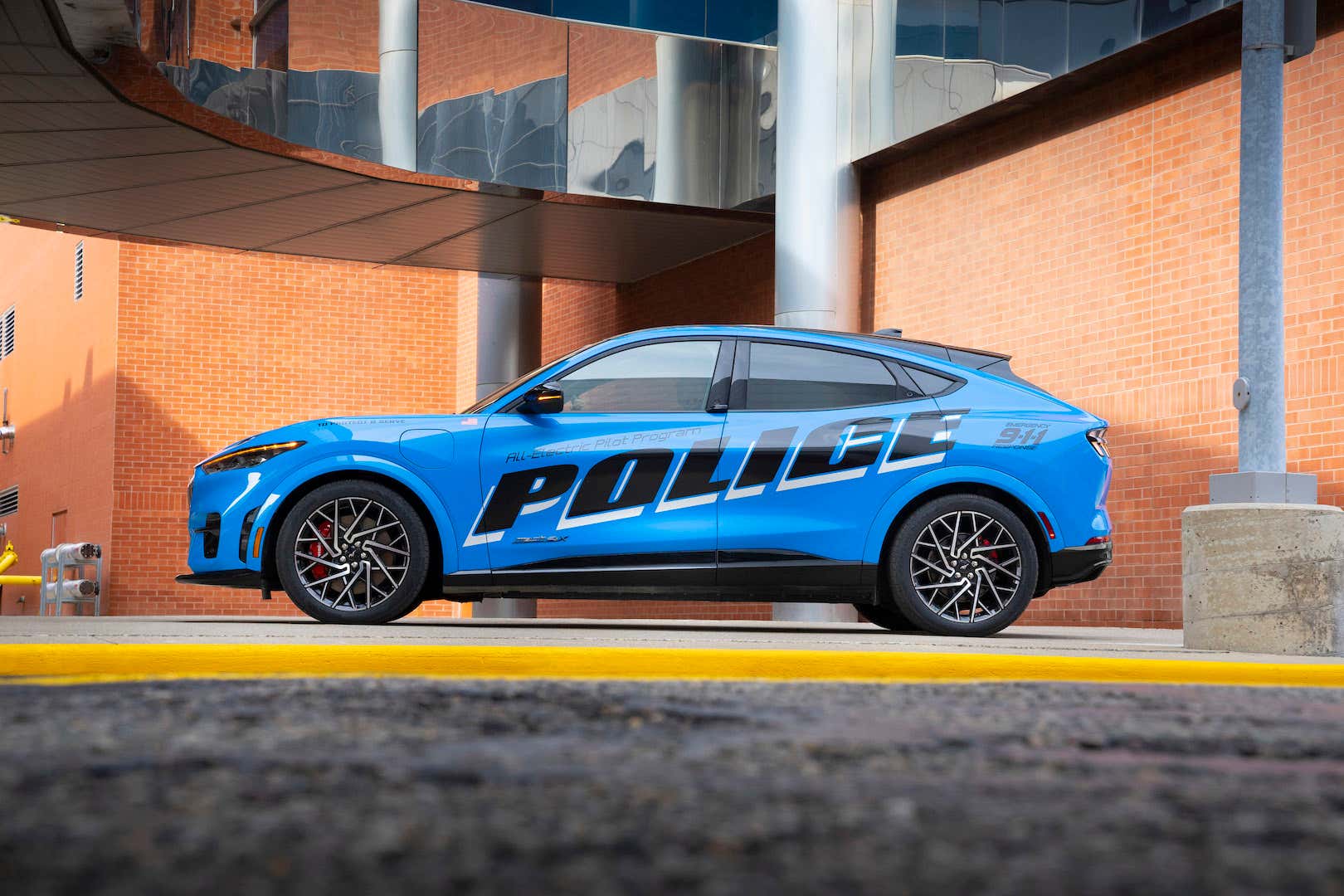 The Mach-E’s poor performance appears to stem mainly from a combination of traits specific to it and fundamental limitations with electric vehicles. As an engineer would say, they’re just not right for this use case; they’re not the perfect tool for the job. That’s not to say they don’t have a potentially useful role with police departments or other governmental organizations—they just need to not be bought carelessly, lest they result in millions of wasted taxpayer dollars.

Momentum Driving: How to Be One of the Fastest Cars with the Least Power