The last thing any Subaru driver who’s worked on their own car thinks is that it needs more cylinders. Their cramped engine bays make getting to four spark plugs hard enough, never mind the six Subaru sometimes inflicted on its customers until recently. Having to service 12 sounds like something you wouldn’t wish on anyone short of Scotty Kilmer, though it’s not so bad in the case of the 2009 Subaru Impreza WRX being built by one John Proulx, who has swapped out his Subaru’s turbo flat-four for a rare, JDM Toyota V12.

Proulx, who posts updates on the build to his Instagram account @1lowrx, sourced the engine from a 1997-2017 Toyota Century; a Japanese luxury sedan of greater prestige and exclusivity than even most Lexuses—it’s the Japanese Emperor’s official ride. For a 5.0-liter engine, it wasn’t particularly powerful from the factory, producing an advertised 276 horsepower and 354 pound-feet of torque. In Proulx’s possession, though, it may make almost four times that, as he tells us he plans to crank it up to 1,000 horsepower with a pair of Garrett turbos. 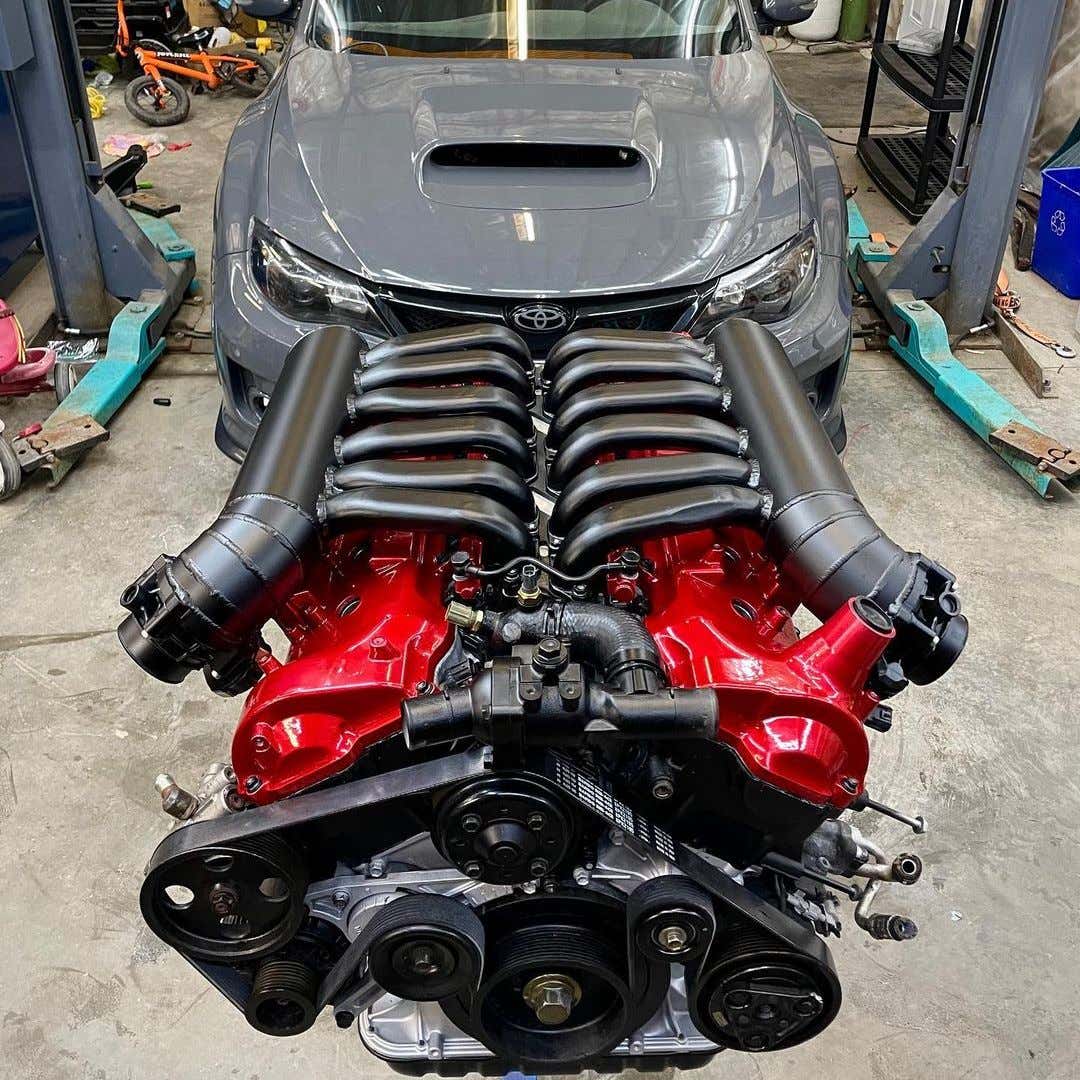 As the stock Subaru drivetrain wouldn’t withstand that kind of power, Proulx’s ditching the all-wheel drive and exchanging the transmission he used for the car’s last swap—a Toyota Supra’s 2JZ-GTE turbo-six—for the dual-clutch seven-speed from a 2010 BMW 335i. That’d make it the Getrag GS7D36SG; a famously stout ‘box that has been swapped into Nissan Skyline GT-Rs, and can apparently be upgraded to hold 1,250 pound-feet of torque.

A 1,000-horsepower Toyota V12, then, should be no problem to the transmission—nor for the driveshaft (custom), or the rear axle. That’ll be centered around an upgraded Ford 8.8-inch differential, which will divide power between the rear wheels with reinforced axles. And surprisingly, the whole shebang fits into a Subaru Impreza more easily than one would expect.

“It fit pretty well considering how big it is,” Proulx told me. “I did have to move the steering rack a bit to clear the starter.”

More complicated was preparing the rarely tuned Toyota V12 for boost, which involved buying performance parts—in some cases—literally by the dozen.

All together, Proulx tells us he’s well over $20,000 USD deep in the project, and he still has to fabricate—and work out how to fit—plumbing for the turbos, radiator, and other heat exchangers. He has a plan, though, and is already looking down the road at installing paddle shifters, which speaks to his certainty that he can make everything fit together.

“I’m not driving it in our harsh Canadian winters, that’s for sure,” Proulx told us. And with 1,000 horsepower and just rear-wheel drive, not a soul out there can blame him.

By the time Canada thaws out next spring, he hopes his creation will be ready to unleash on the road—and I do too.