There’s a saying in Britain that goes “in for a penny, in for a pound.” Its meaning boils down to screw it, might as well go ham, and it’s a mindset far too easy to adopt when tackling exciting new projects. It’s one Nissan Silvia owner Tom Keyworth took on after buying an S15 “in need of some attention,” whose TLC has since turned into a meticulous, years-long build with no expense spared…or end in sight.

Keyworth explained to The Drive his car’s story began just over four years ago, when he bought an affordable S15 Silvia only for the tire to come off the rim at 60 mph on his drive home. Upon finally getting the car to his garage, he discovered “a huge boost leak,” giving him reason to strip the Silvia down to see what else was amiss. He quickly discovered the door sills needed replacement, and while hunting down new sheet metal, he met his build partner Steve Richardson of Nissan specialist SR Autobodies. 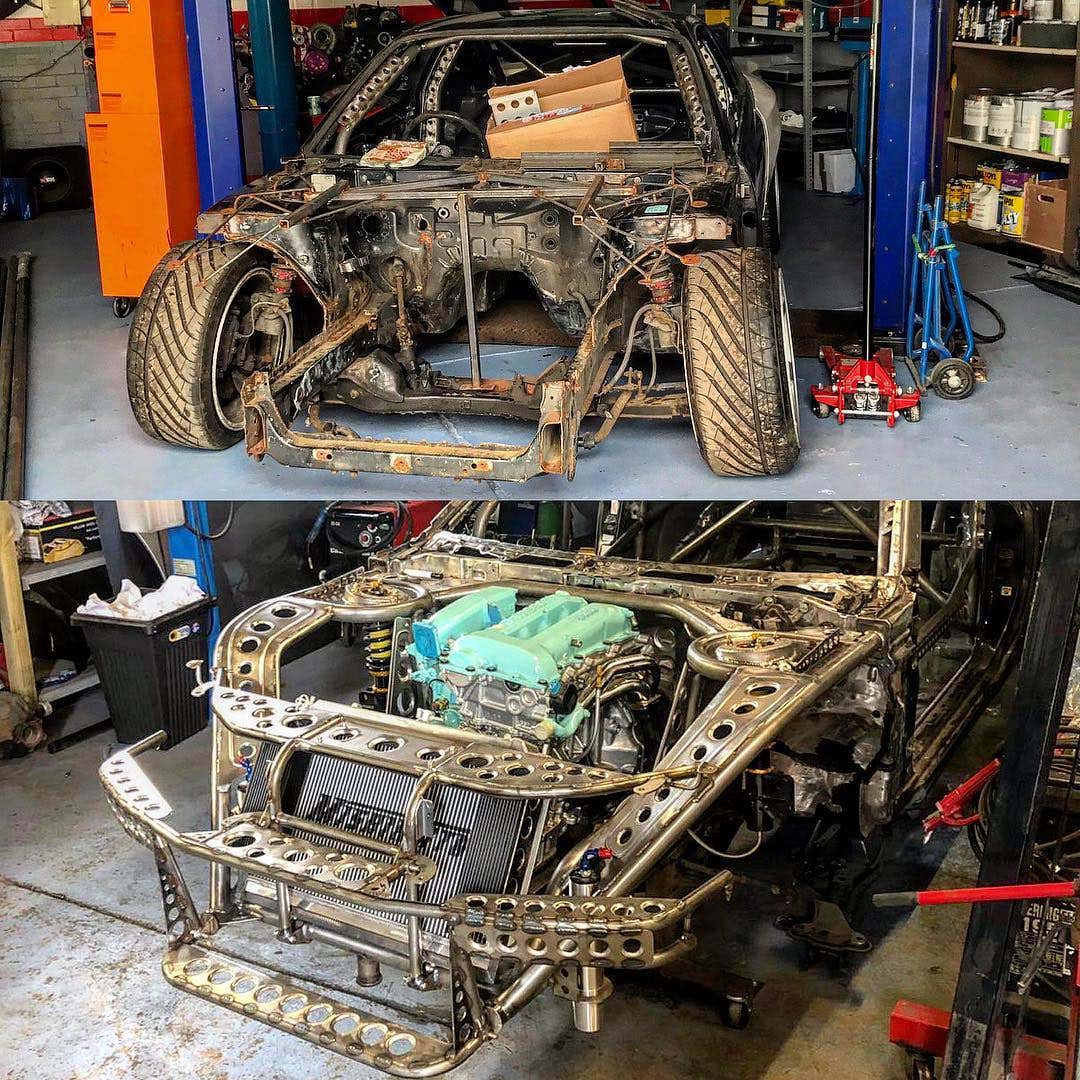 Richardson found the S15’s chassis to be in even poorer shape than Keyworth realized, and suggested cutting its whole front end off. Keyworth rolled with it, and before long the Silvia had a fully tube-framed front end with mounts for the drivetrain and suspension in the stock locations—though the factory suspension would be swapped for a drift-ready setup. When Richardson began filling in parts of the tube frame with sheet metal for added stiffness, Keyworth had him go wild with a tool called a dimple die, shedding weight, boosting rigidity, and most importantly to Keyworth, making the metalwork all pretty.

Keyworth was so pleased with the car’s skeletal, super-stiff front end that he and Richardson wound up doing pretty much the same to the rear, though this time the dimple die didn’t get quite as much of a workout. Having gone so far with the chassis already, Keyworth saw no reason to leave the interior alone—which he already planned to get caged—so when it came time to expand the transmission tunnel for a 350Z ‘box, he had the new steel patterned in what he calls “diamond stitch.” This VW-inspired touch quickly spread to the floor and hood, which combined this style with the dimple die work seen all over the frame and aluminum bucket seats.

All this metalwork took close to four years, a time in which Keyworth hasn’t been able to drive the car. In fact, that time the tire came off remains his only drive in the Nissan. It seems that one drive, though, was enough to win his commitment through endless scope creep, now encompassing a swap to the RB26DETT straight-six from a Skyline GT-R (it had an SR20DET before that). Even when that’s finished, though, it may be hard for Keyworth to ever consider the build done.

“I don’t think these things are ever really finished,” Keyworth told The Drive. “I want nothing more than to be able to drive it again and for now that’s the real goal. Small steps are really the only way to approach this kind of builds or it just becomes overwhelming. Set small goals and smash them!”