Home » Auto News » Service centre bills me Rs 5.5L for repairs on my Q3 without my consent

I gave my car for a regular service & besides a minor engine oil leak, I had no other complaints at all.

My name is Dr. Ajay Pandey MD, DM cardiologist. I am practising as an interventional cardiologist in South Mumbai. I own an Audi Q3 with registration number MH-04-HH-2111 and chassis number WAUZJF8U8GY001839, which I purchased in the year 2015.

On April 7th, 2022, I handed over my car for regular service along with a complaint that the engine oil was leaking. The same has been documented in the necessary admission papers at the time of handover of the vehicle.

Mr. Arijit Rudra was assigned as the Service Advisor. After a detailed inspection, he mentioned that there are several issues with my car which can be fixed by replacing a few parts. An initial verbal estimate of about Rs. 1 – 1.5 lakh was shared for which I gave my consent. A few days later I was called to the service station and informed that the estimate may go up to Rs. 3.5 lakh since there are major fixes required. A breakup of Rs. 3.5 lakh was provided on a paper (of course, I bought them at face value due to my little or no knowledge about the technical aspects of an automobile), the copy of which was not shared with me. I did mention at this time, that the amount sounds very high and they should do only what was very necessary to fix the car and I was assured they will consider lower labour charges and keep the total bill under Rs. 4 lakh and only perform repairs that are absolutely necessary.

My car was in the garage for over 3 weeks. During this time, I did face a lot of challenges in commuting. For the kind of profession I am in, it is very important to reach in time for scheduled appointments or emergencies. However, I was hopeful that my car was in the best hands, and at the same time, I was looking forward to receiving it soon.

On April 27th, I got a call that the car is ready and I could collect it. At this time, I inquired about the final bill amount and they mentioned that the bill was not ready yet and it shall take some time to prepare the final bill. Please note, during this conversation as well, I was never intimated about a further increase in the bill amount than what was earlier communicated to me.

On May 2nd, I went to collect the car and that day, a bill of Rs. 5,53,997 (Rs. Five lakh fifty-three thousand nine-hundred and ninety-seven), which Mr. Arjit mentioned was after agreed discounts and doctors’ complementary discount, was handed over to me. This came as a complete shock.

Until I gave my car for regular service, besides a minor oil leak, I had no other complaints at all. I have always serviced my car regularly and maintained it in good condition. After receiving a few iterations of the estimate and finally confirming to me that the bill will be within Rs. 4 lakh and with absolutely no further intimation of an increase in amount, I was being handed over a bill of Rs. 5.5 lakh. Wow! That did take some time to absorb and yes, I haven’t been able to decode a lot of it yet.

Did they not need my consent for additional services when the deviation of the amount is in lakhs? Were those repairs / services a must to do or a good to have? Didn’t I mention in person and several times over WhatsApp conversations that please only work on whatever is necessary and a showstopper? Was the initial vehicle inspection incorrect? Where was the slippage? How come when they called to inform me that the car was ready, they did not have the final bill in your hand?

They did explain to me what repairs were done while handing over the bill, but I don’t understand automobile engineering. They did not take my consent for repairs amounting to a whopping Rs. 5.5 lakh. Shouldn’t that be my decision?

I told Mr. Arjit that since I will not be able to pay their dues, please get my car evaluated so that I can sell it off. He very promptly shared with me a valuation of Rs. 13 lakh for my vehicle, which I believe is underquoted.

However, I am writing to you with hope and anticipation that someone from your team will look into this and conduct an audit to validate the repairs, the amount associated with the repairs, and if they were really required?

Along with the several apprehensions that I have with regard to the authenticity of the services that I have received towards my car at Krishiv Motors, I am disappointed and deeply saddened at the same time because this was my first luxury car, my first Audi, my first vehicle that has my daughter’s birthdate as the number plate and so many beautiful memories that we have as a family. I definitely do not wish to sell this off. What I really want is a thorough check on the repairs done to my car because I sense there may be some foul play somewhere while handling my car during this service.

Waiting to hear back soon. 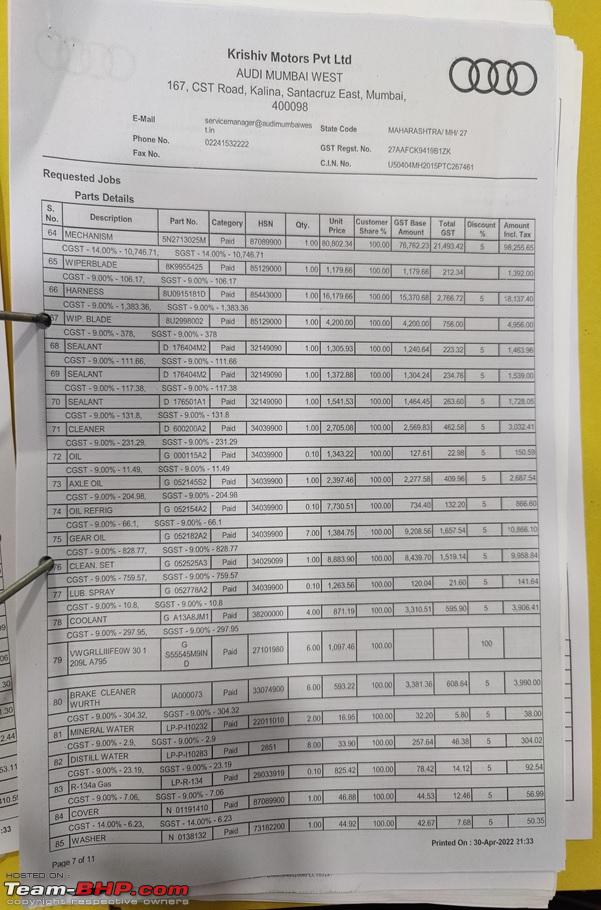 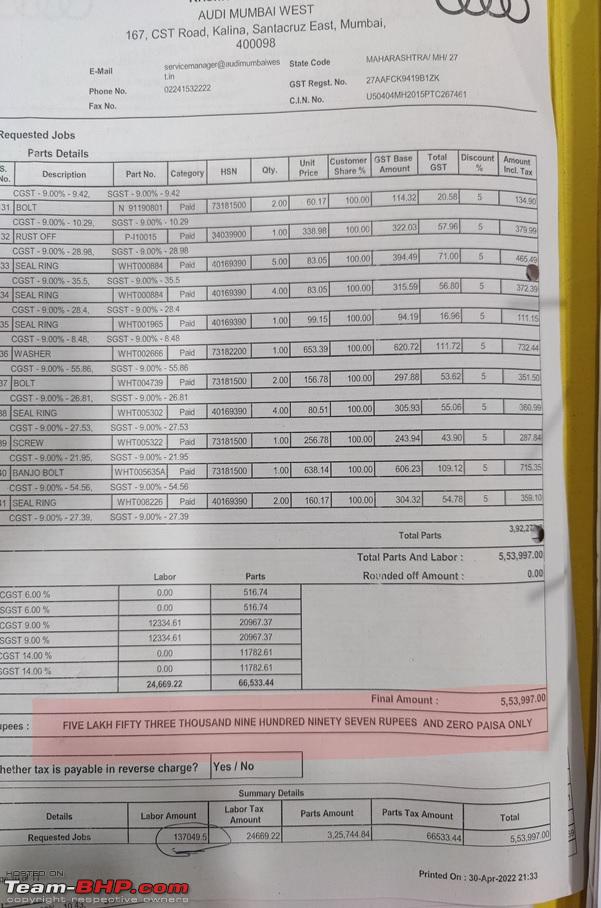 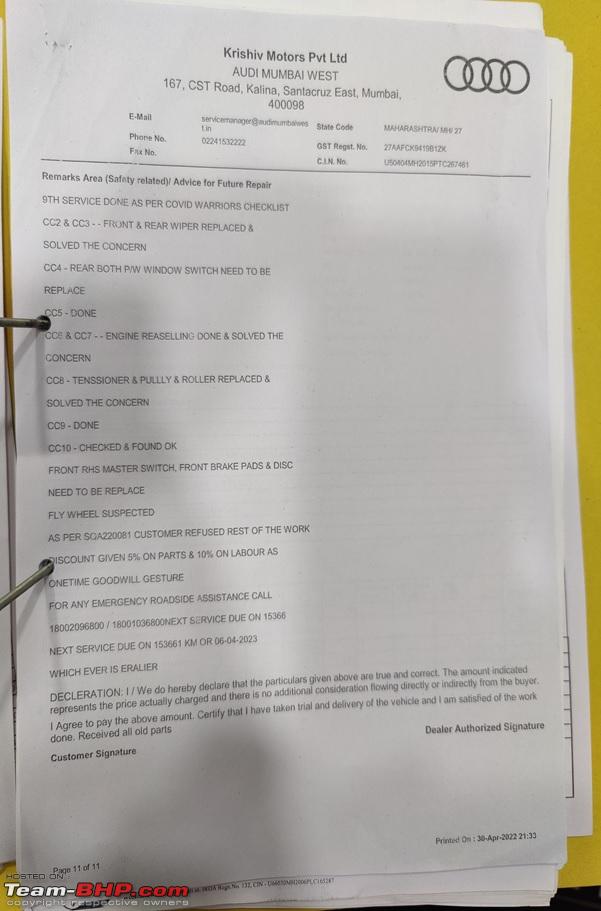 Here’s what BHPian Sanidhya mukund had to say about the matter:

Having gone through the list shared, here are a few things I noticed:

Lastly, they have no right to proceed with work that the customer did not agree to get done beforehand. Also, it is the duty of the service advisor to explain each and every aspect of the bill in detail and do only what the customer approved.

My car, a Mercedes C class of similar age, recently went for a service at the authorised MB dealer. They initially sent me an estimate of 6.5 lakhs, but my SA called up and clarified that this in no way represents what needs to be done. It is only a list of observations that is given to the customer along with prices. If the customer so wishes, he can proceed with all or some items mentioned therein. My SA explained to me exactly what all has to be done to keep the car healthy and prepared a separate estimate for that. He explained each of the items listed and only did what I approved. I refused to replace the air filter and AC filter, since these were done the last time as well. I also asked them not to get the transmission oil changed because I had already replaced it at a non-MB garage for around 50% of what MB would have charged. I ended up paying about 1.9 lakhs for engine mounts, servicing, a set of new tyres, an auxiliary battery and 2 ABS sensors. The 6.5 lakh estimate included everything, ranging from a broken centre console plastic to a torn seat cushion, a slight malfunction in the tail light etc. These replacements are obviously unnecessary on an ageing car and also cost a Bomb.

The initial estimate vs. the final bill:

Since you only asked them to do the work necessary to keep the car running and had only agreed to a total bill of 4 lakhs, ask them why did they replace wiper blades (5k) and seat mechanism (90k) and also, why did they sell you a hand towel for 9k? These items themselves total to about a lakh. Also ask them questions about the oil seals, battery negative terminal and the zillion bolts and screws that they claim to have changed.

EDIT: turns out, that item 64 is not a seat adjustment mechanism, but is actually something related to the gear selector mechanism. Still, why did they replace it if the customer had no issues WRT the gearbox?

I also note that they have replaced the flywheel, which again, could be something that needed to be changed, given the odo reading of your car. Considering a replacement of Flywheel + ribbed belt (and its tensioners and pulleys) + engine mounts + water pump + servicing + replacing oil seals, 3.5-4 lakhs could easily be the final bill, considering the fact that the work was done at the Audi authorised workshop. Parts and labour would undoubtedly have been cheaper when done at an independent garage, but what they charged you for these seems along expected lines for the authorised garage. However:

Here’s what BHPian batish had to say about the matter:

Even after this huge amount, they had the audacity to not change the brake pads and disc but mentioned specifically on the bill for future repairs.

Then they wonder why their sales are so low. Even after all these years, VAG group has not been able to grip their after-sales services. Sigh.

Here’s what BHPian clevermax had to say about the matter:

I have a friend who happened to buy a used Q7 and he has the same story to tell. In his very short term of ownership spanning a few months, he had to spend more than 5 lakhs on the service of his car at the Audi service.

What Car Are You Most Thankful For?