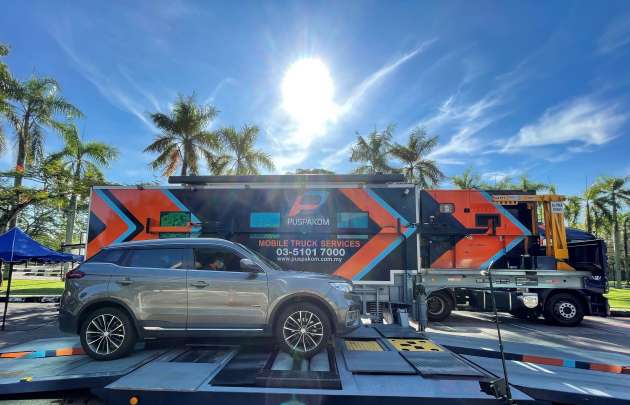 In conjunction with the upcoming Chinese New Year festive season, Puspakom has announced that it is offering free Voluntary Vehicle Inspection (VVI) for private vehicles. The free VVI service will be available from now till January 20, 8am to 5pm, at all Puspakom branches nationwide except for Taman Bukit Maluri (Kepong), Shah Alam and Pasir Gudang.

For the free VVI, one will have to make an appointment online at MyPuspakom. No appointments needed for Puspakom’s mobile inspection unit, which will visit several places from January 12-19. The locations are UKM Bangi, Lotus’s Kepong, Wisma DRB-Hicom (Glenmarie), UIA Gombak and Ayer Keroh in Melaka. Mobile unit operation hours are from 9am to 4pm, and they accept motorcycles at certain locations – details in the image below.

It’s good enough that they’re offering free inspection, but Puspakom is also throwing in some prizes for those who send their cars in. Gadgets up for grabs include a Huawei tablet, Huawei smartphone and Fitbit tracker, besides Starbucks cards.

“This free VVI campaign is to help the public obtain information on the condition of their vehicles, via inspection using computerised tools. This is so that they can perform appropriate maintenance before balik kampung this Chinese New Year,” said Puspakom CEO Mohammed Shukor Ismail, who added that the initiative is a corporate responsibility as the government’s appointed vehicle inspection body.

He added that the VVI will cover 25 areas include tests on the brakes, suspension, smoke, lights, tyres, tinting and the side slip test. “In contrast with vehicle inspection offered by some companies, Puspakom’s VVI uses computerised equipment that is calibrated to the same standards as used in developed countries such as France, Belgium and Spain, which follows the international standard,” he added.

It’s a good opportunity to get a health report for your car – not only is it free, you even stand a chance to win some prizes! Click on the images above for details.

McLaren to enter India; official prices out next week

Watch: Why the VAQ Diff Makes the GTI so Good