Congestion is an ongoing challenge in urban areas to say the least, and often manifests in the difficulty faced in getting a vacant parking box. That is difficult to begin with, even before encountering characters who occupy a parking space by standing in it, which is what was encountered by local actress Elvina Mohamad as reported by The Sun.

Elvina posted a short clip of the episode to her TikTok account, which can be viewed below, and which shows a woman occupying a parking box while waiting for her friend to arrive in their own car to parking in said space.

“We were driving in circles three or four times looking for parking, and this woman [stood in] our spot, reserving it for her friend,” Elvina said. The woman depicted in the video said she had been standing there for a long time, but Elvina had already been waiting to park at that parking box after another car departed, she added.

The woman continued to ignore Elvina and guided their friend’s car – appearing to be a blue Perodua Bezza – into the box, with the help of another person which appeared to be from the same group of friends. 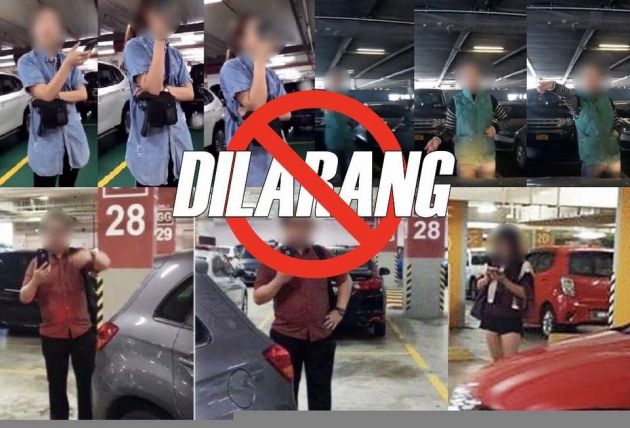 The law has been made clear on this matter, and the Royal Malaysia Police (PDRM) has stated in 2018 that such an act is not permitted, and any person doing so would be committing an offence under Section 50 (3) of the Road Transport Act 1987.

The rule states, “If any person, otherwise than with lawful authority, remains on any road or at any parking place for the purpose of importuning any other person in respect of the watching or cleaning of a motor vehicle, or for the purpose of directing any driver of a motor vehicle in respect of parking on such road or at such place, he shall be guilty of an offence.

Punishment for anyone found guilty of this is a maximum fine of RM2,000, or imprisonment of up to six months for the first offence. A second conviction doubles the punishment, to RM4,000 for the maximum fine, or a prison term of up to 12 months.