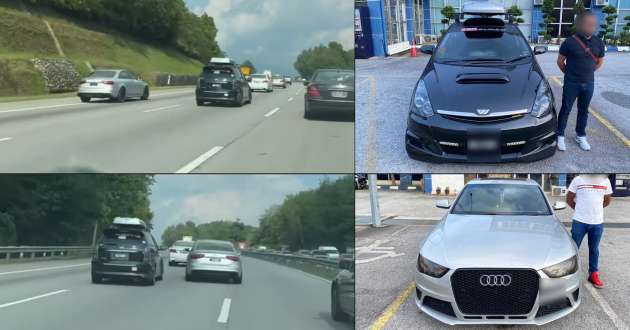 Remember that viral video of an Audi A4 and Toyota Wish zig-zagging on the expressway recently? Well, the Royal Malaysia Police (PDRM) has arrested both individuals for the preposterous offence, which occurred on May 1 between KM 269 to KM 238 on the North-South Expressway (PLUS; southbound).

Thanks to the video recording, the Seremban police managed to track down both drivers. The Audi A4 driver – a 36-year-old local – turned himself in at 9 pm on May 2, while the driver of the Toyota Wish (34-year-old) surrendered the following day at 6.45 pm. Both vehicles have been impounded, too.

According to IDP Seremban, the motive for the purported “car chase” was because the Toyota Wish driver had not been paying his car loan for several months, and the Audi driver (who works as a car repossessor) intended to flag him down.

The case is still ongoing and the pair will be investigated under Section 42(1) of the Road Transport Act 1987. If found guilty, the offenders will have their driver’s licence revoked for a period of up to five years, and face potential jail time not exceeding five years and a maximum fine between RM5,000 to RM10,000.