Vans are seeing a surge in popularity again, especially when it comes to overlanding rigs. Builds like these are designed for livability and reliability, but what if you want something a little more exciting to drive? A custom car shop in Sweden called Caresto has the answer.

After loving vans as a kid, the shop’s owner, Leif Tufvesson, bought a 1978 Chevy van out of an alley in Los Angeles. He had it shipped back to Sweden but he wasn’t quite sure which direction the van build would take when it arrived. However, when a customer project changed directions and a C7 Corvette donor car was suddenly sitting around, it all began to take shape pretty quickly. It’s not done yet, but this shorty van is almost 100 percent Corvette underneath, and it’s doubtlessly going to be an epic machine when it’s finished. 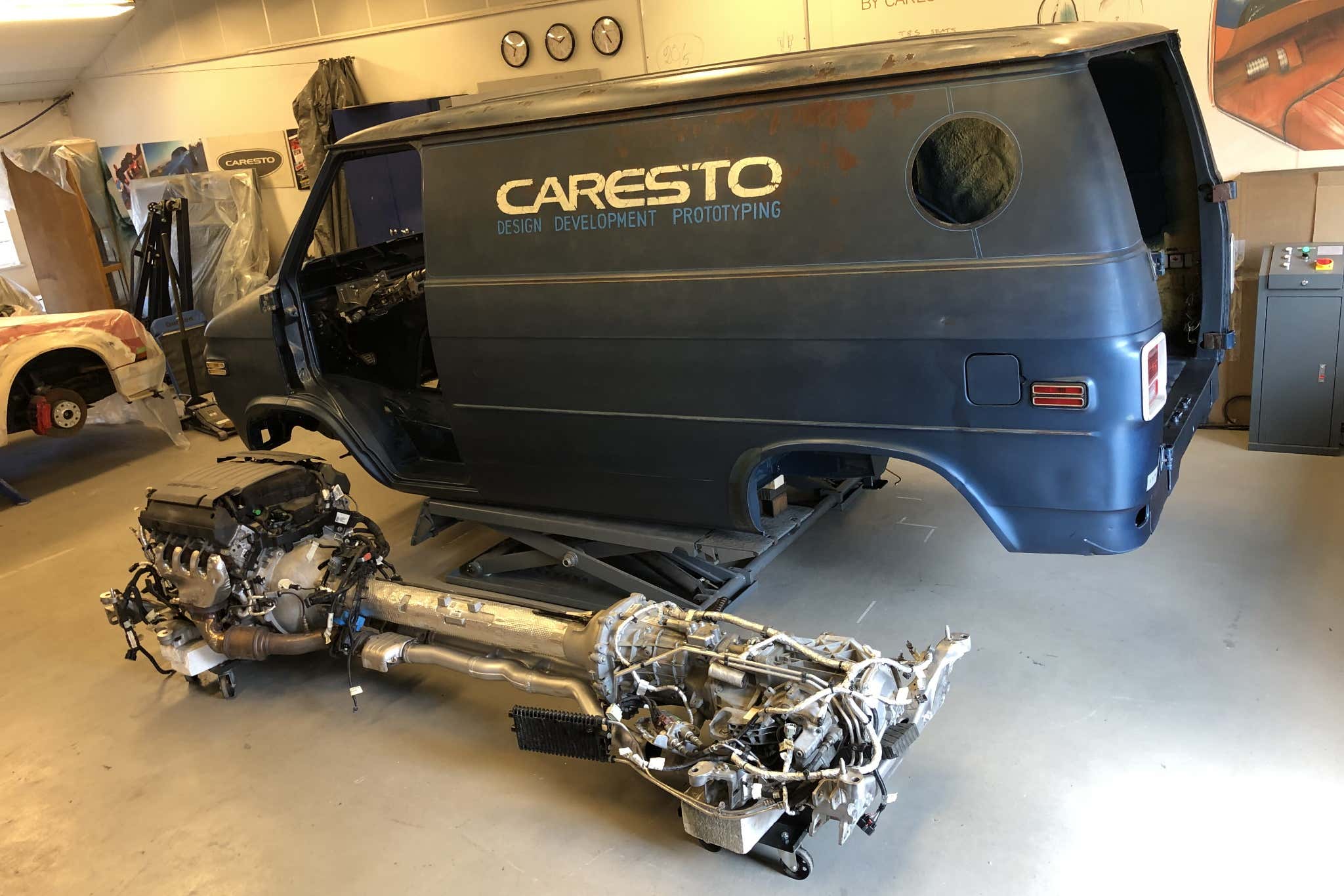 The van in question is a 1978 Chevy G10 Shorty. It was originally modified into a camper soon after being built by Red-E-Kamp. All of that has since been ditched and now it’s got the 6.2-liter V8, seven-speed manual transmission, and suspension from a C7. Tufvesson says the project initially got kickstarted in November of 2020 because the Corvette donor car was in the shop purely by chance. A customer’s build shifted lanes, a different direction was taken, and in the end, it was ripe for the picking.

“[We] had just started a customer project on a sports car that we designed here and needed a chassis to start from,” Tufvesson said. “When the project was to become a full electric car, the driveline and a few other parts from the Corvette were left behind.”

Surprisingly, the two vehicles’ wheelbases are extremely similar. “It later turned out that the wheelbase of a Shorty Van and a Corvette C7 are basically the same, which made the van project take that direction,” Tufvesson told The Drive. With the justifications in place—every project requires a little convincing—it all got going in earnest. Extensive work to the van’s body had to be done to make all of the Corvette parts work. New suspension components were ordered and fabricated, the body and firewall were altered to accommodate wider wheels and the new engine, and a roll cage was also added for safety and rigidity. 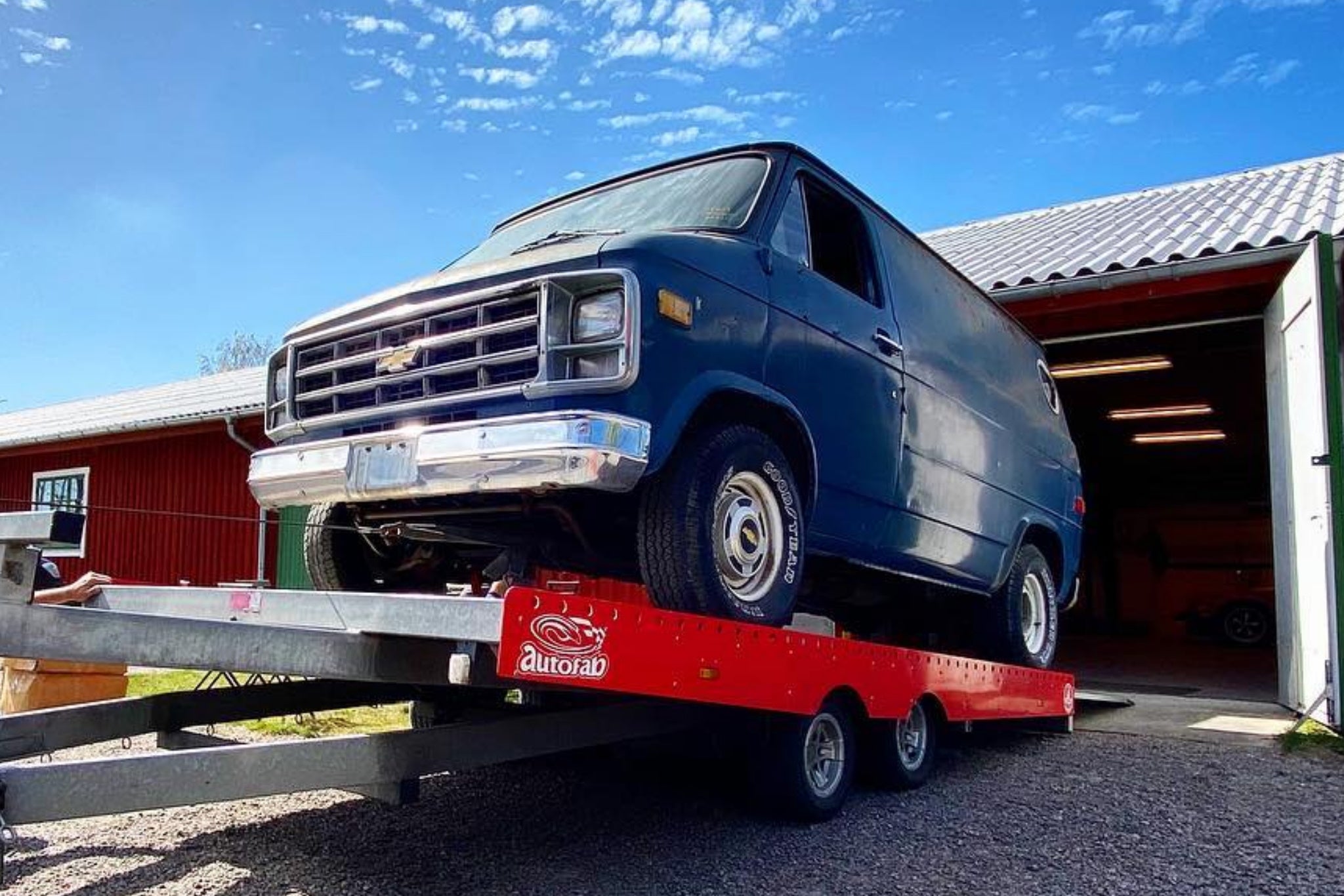 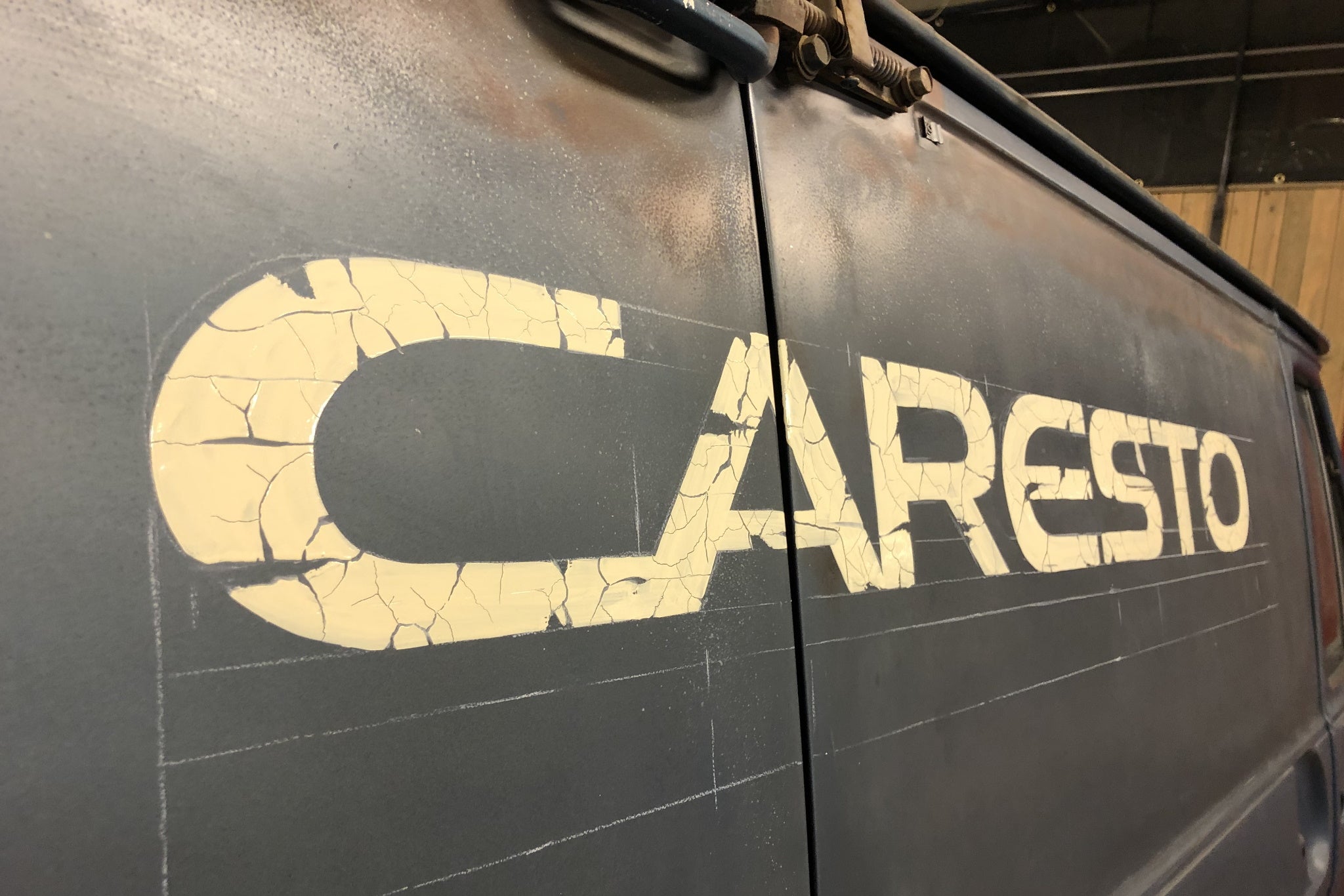 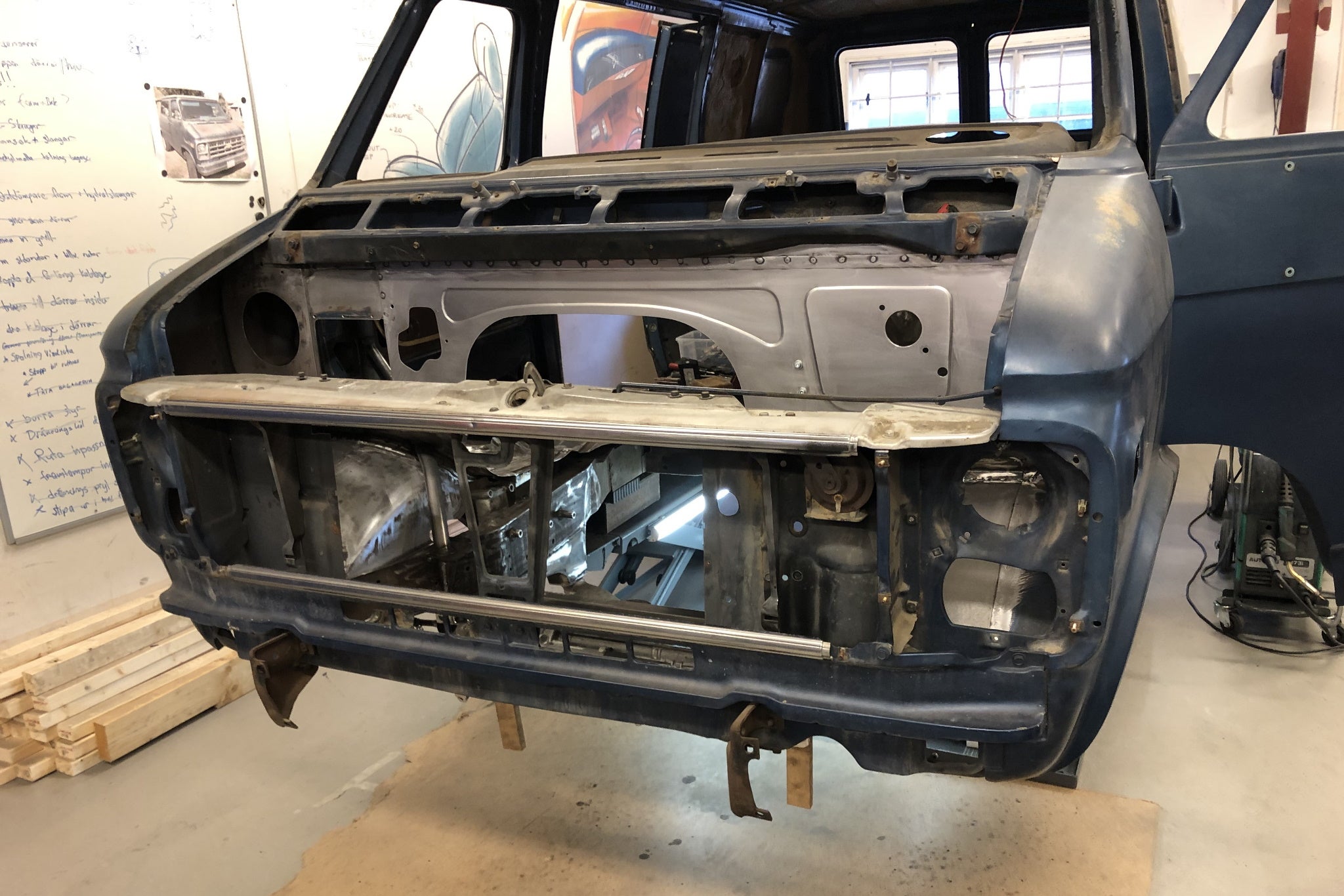 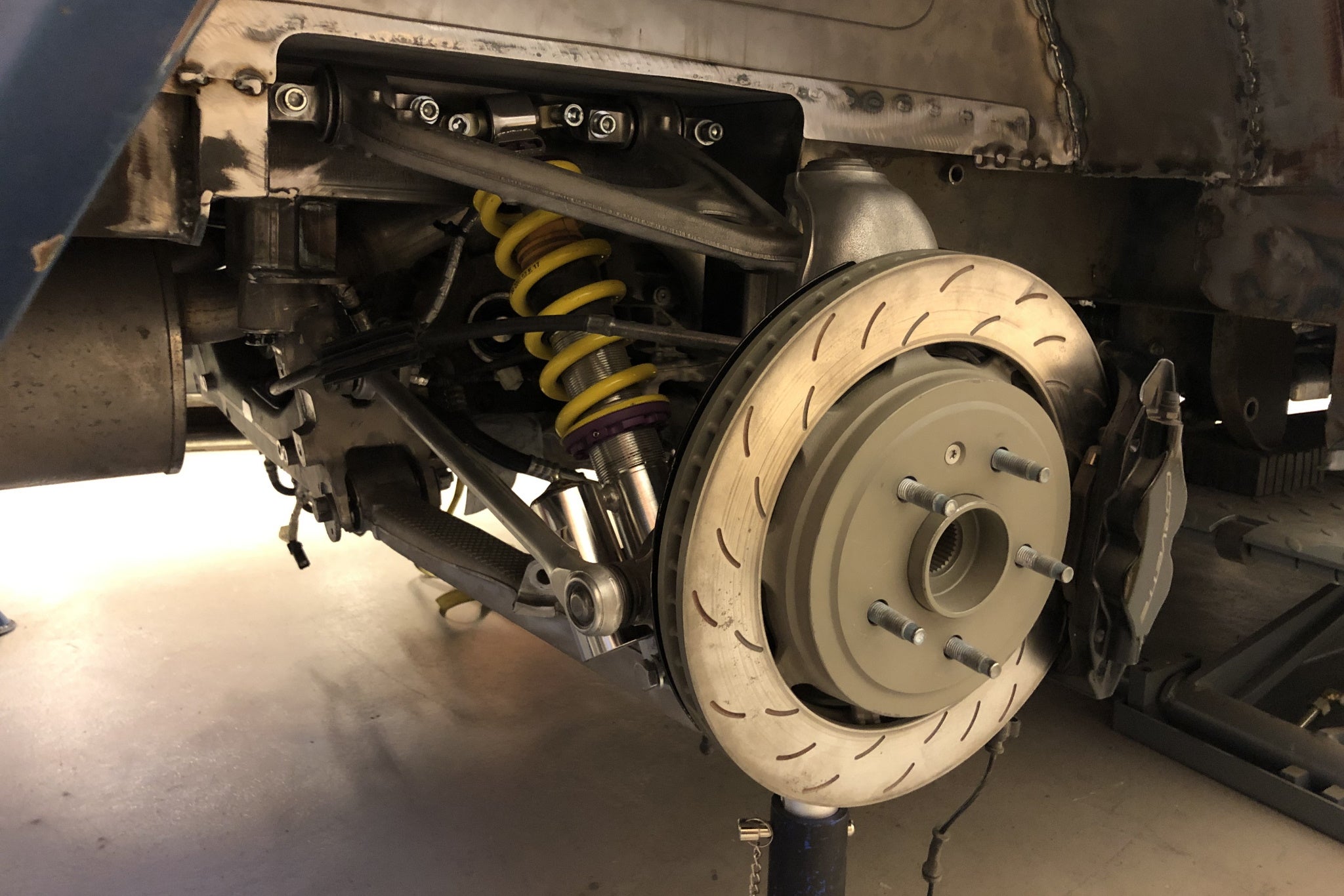 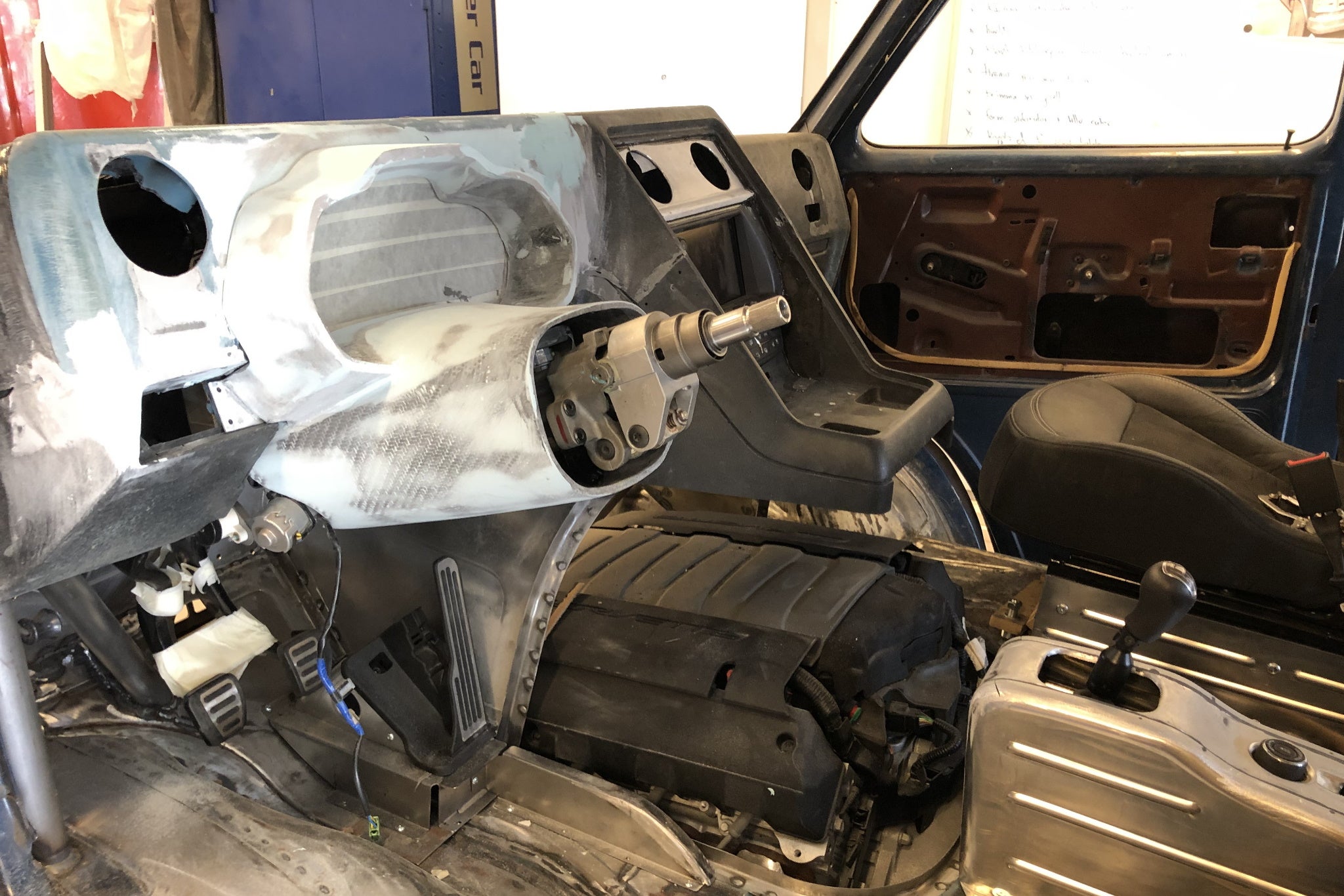 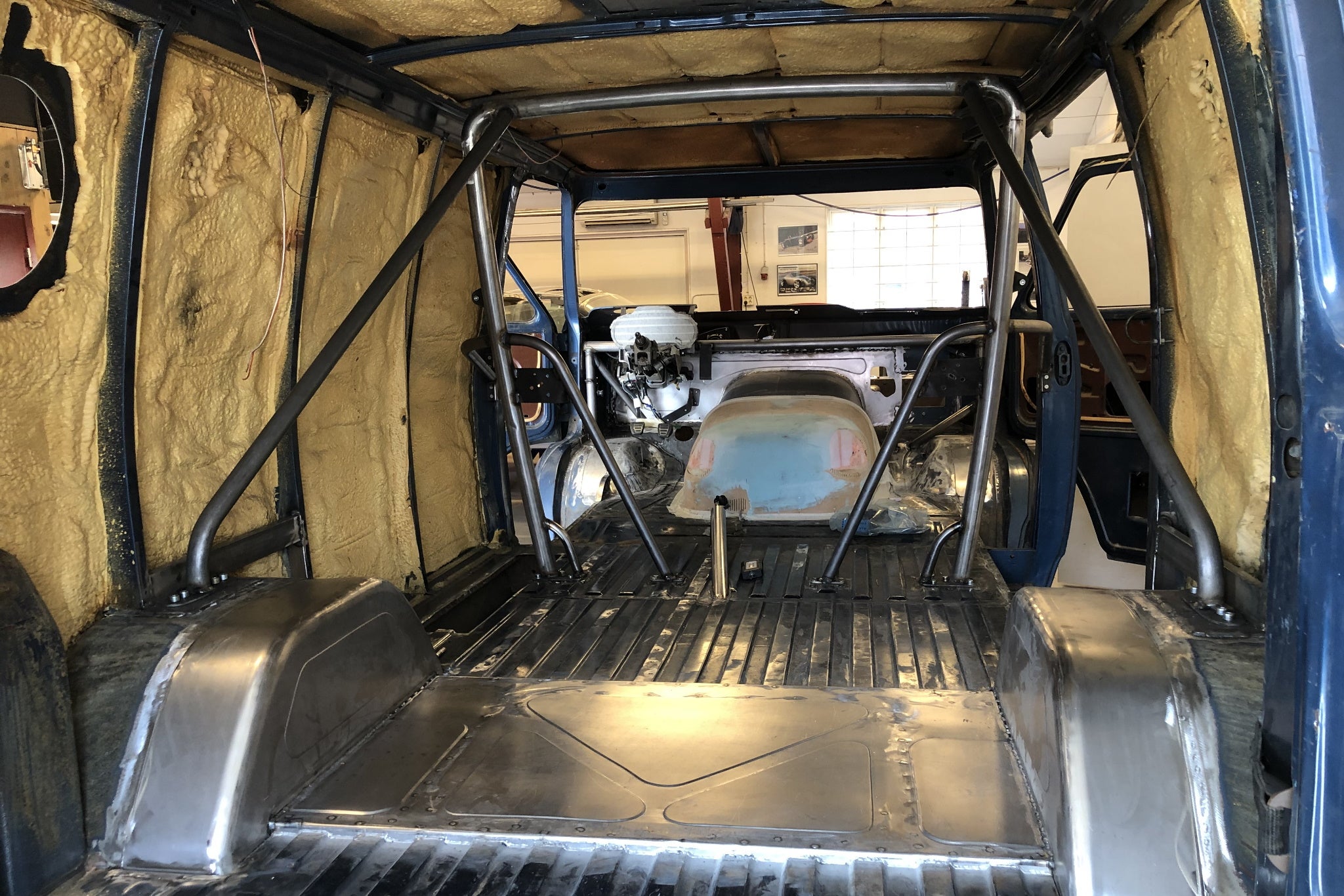 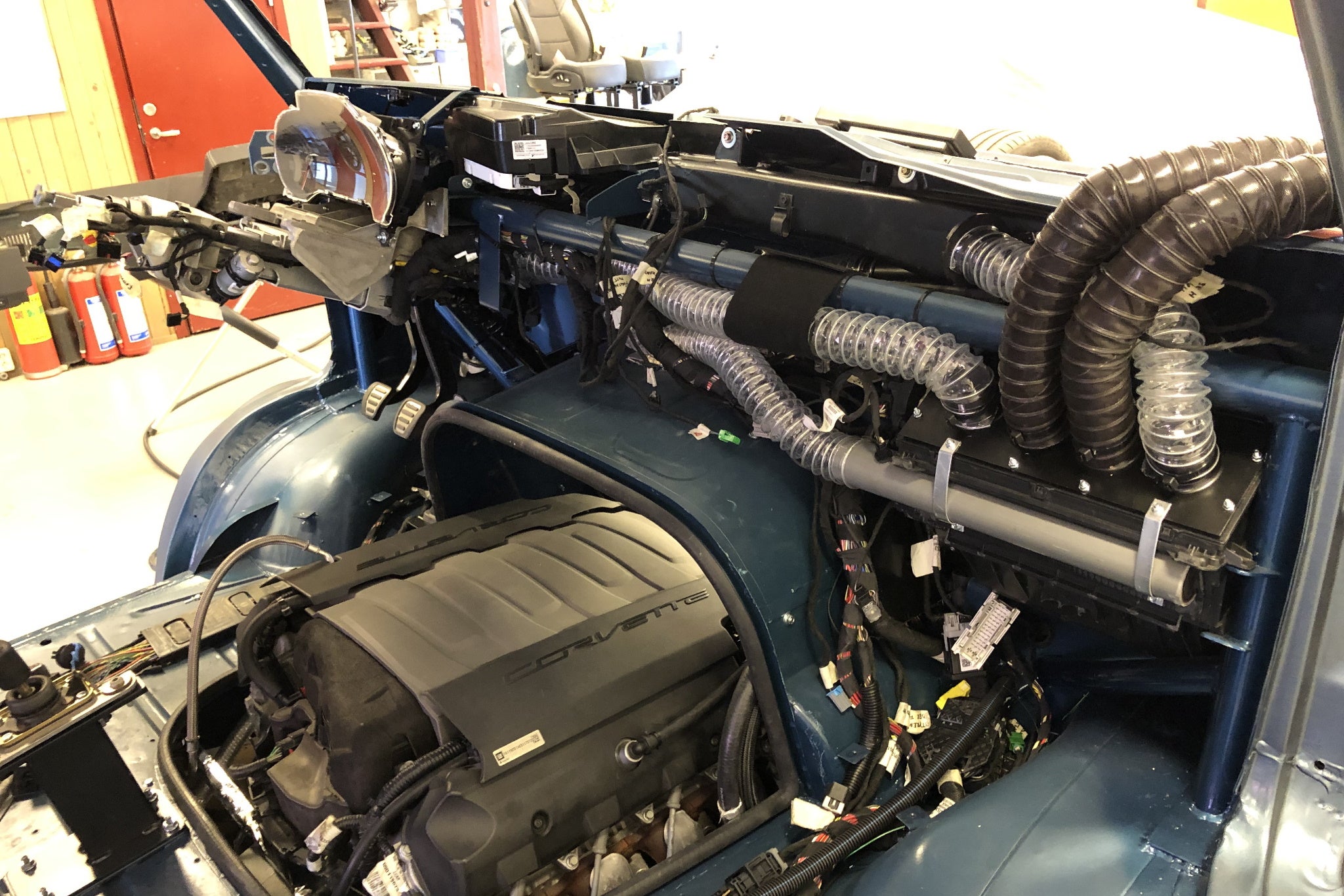 To be clear, this isn’t a straight chassis swap—the van doesn’t feature any Corvette body structure. Everything has been built to work with the Corvette’s suspension, which means C7 control arms, hubs, brakes, and so on. The drivetrain actually went in without much of a fuss as Tufvesson explained the only modification done to that is a new high-flow air filter.

Other non-mechanical parts were added to the van from the Corvette for the sake of comfort. “All electronics, AC, head-up display, etc, is integrated [into] the van and functions as an original Corvette C7,” Tufvesson said. That might be the most impressive part of it all—this van from 1978 has a heads-up display and a slew of other creature comforts from a modern Corvette. 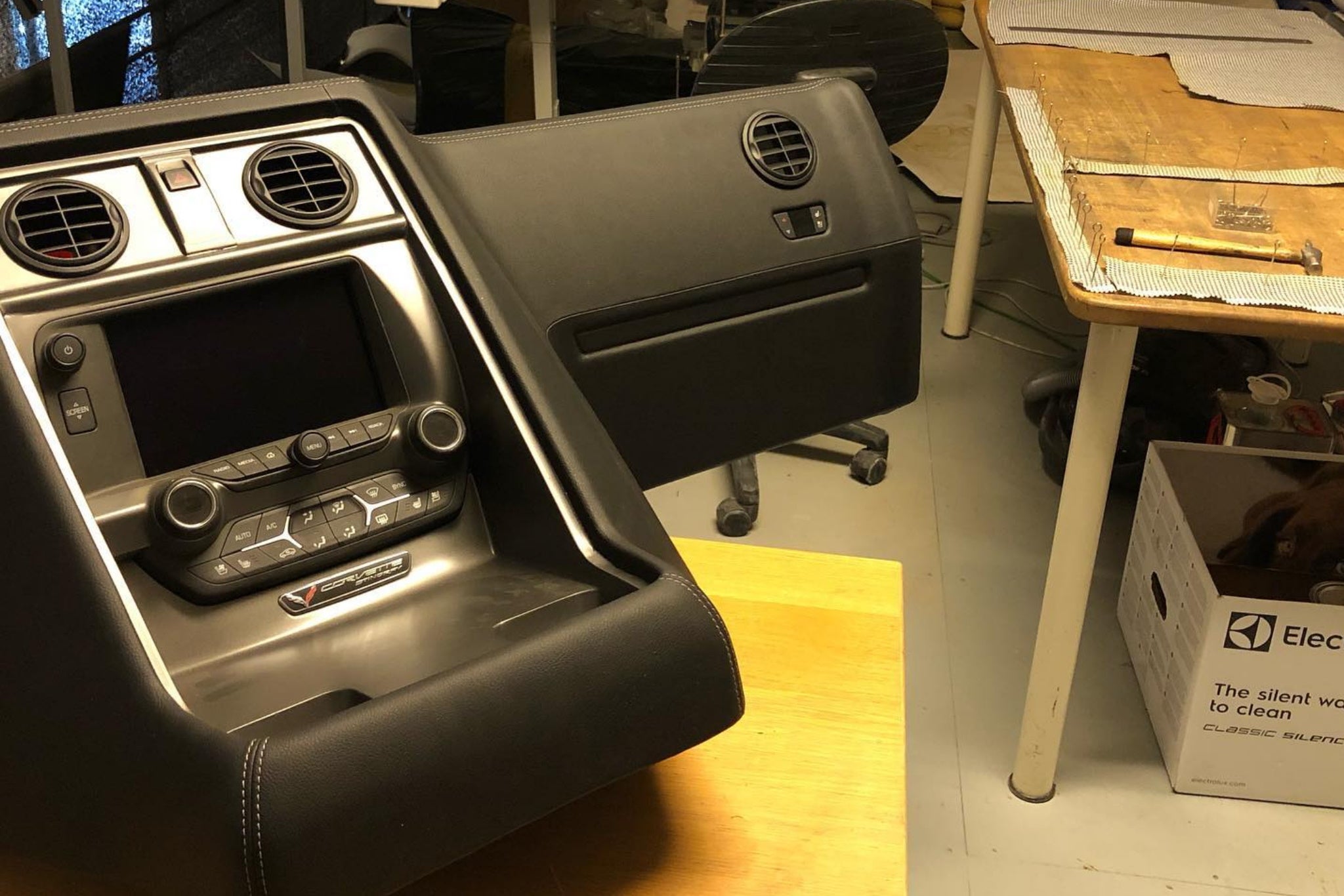 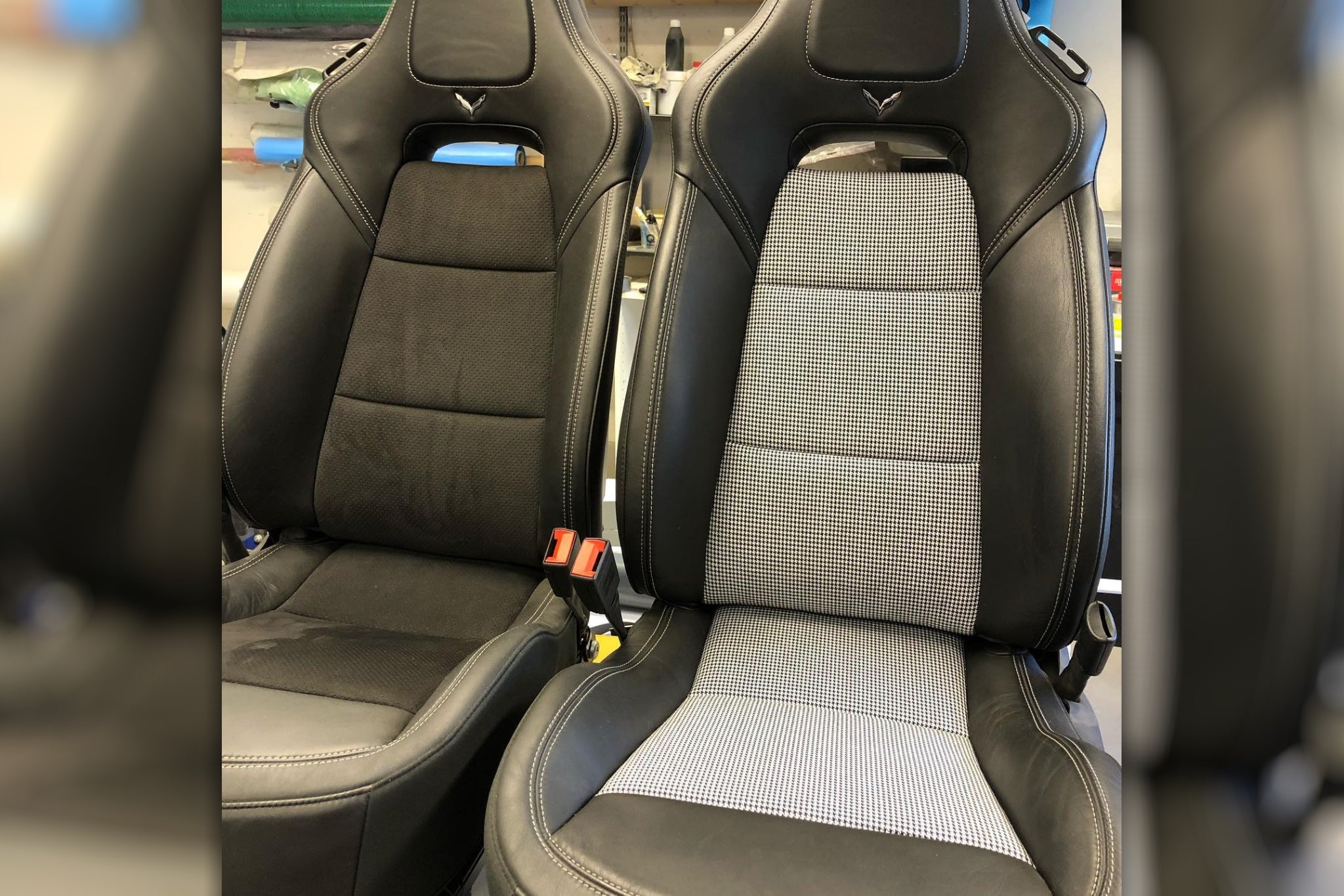 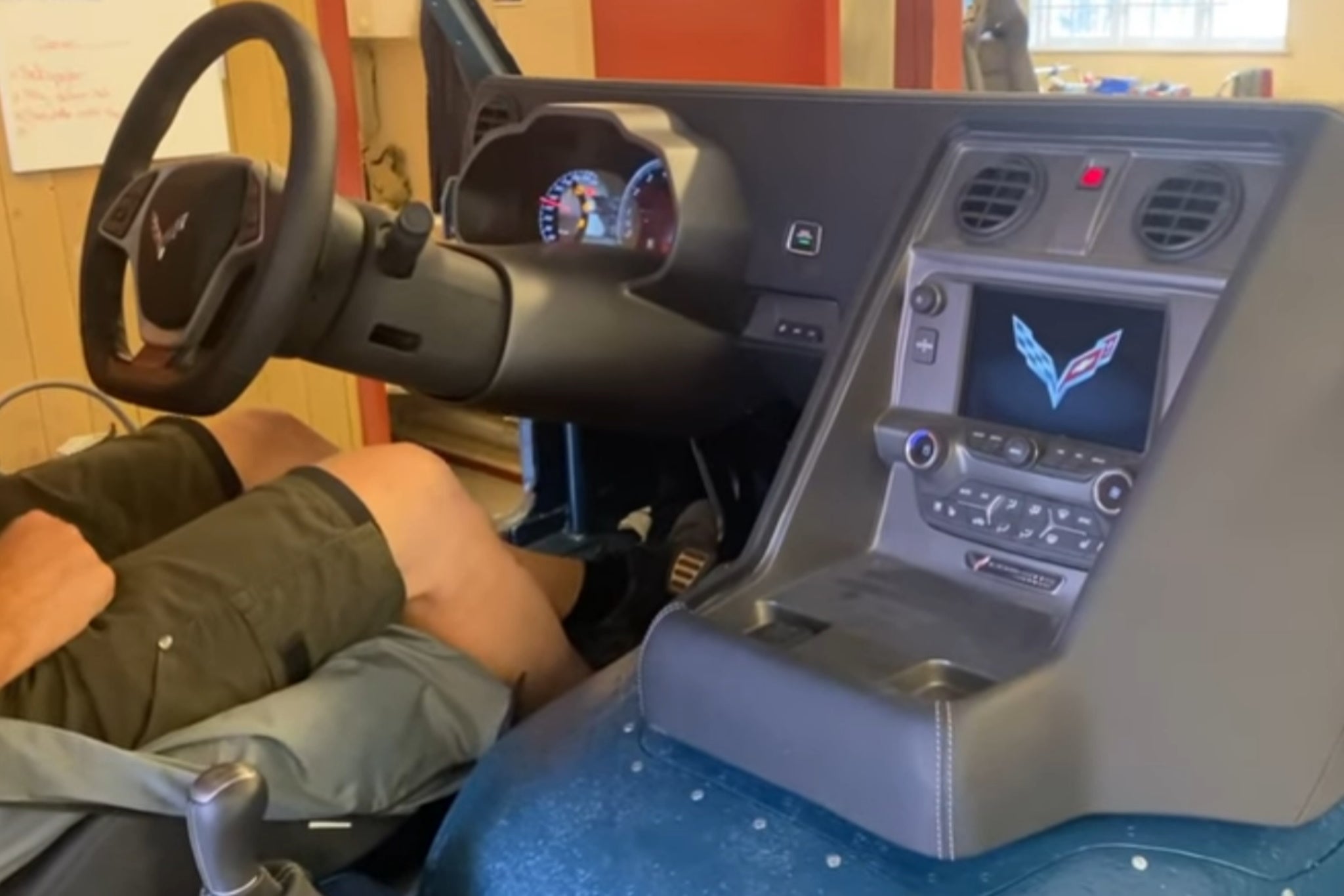 In contrast to this, the patina on the body has been preserved, albeit with Caresto’s name on the side. After the name was applied, the entire van was clear-coated to protect its finish, meaning the van will retain its weathered looks without deteriorating for a long time.

Tufvesson says the van was originally built purely for fun, but it will definitely be used to pick up bigger parts and to advertise his business. “Even if we build rather exclusive cars here, many customers have really enjoyed this project, which is great fun,” he said. The project is expected to be completed within a few months, at which point we hope to see this thing ripping around Sweden in all of its patina-encrusted, Corvette-powered glory. We’ll be sure to give you an update when that time rolls around.